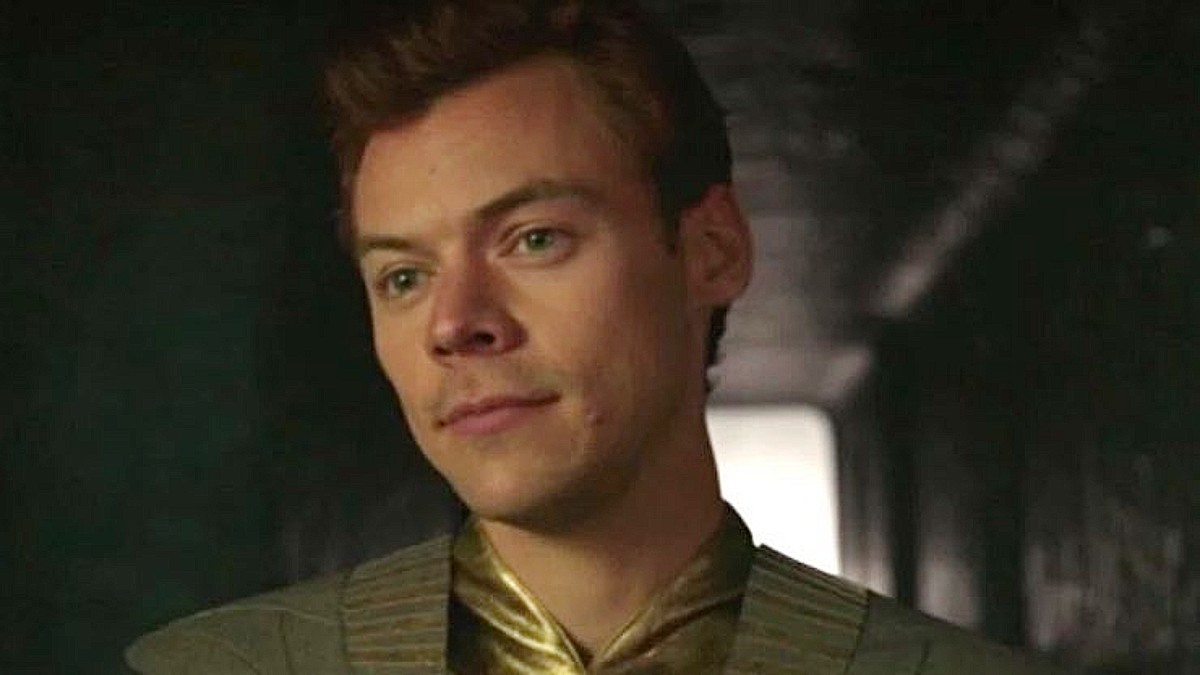 Harry Styles as Starfox made his first MCU appearance in Eternals but his character has a long and storied history that connects to his brother Thanos.

At the end of the Eternals, the team stops the Emergence from happening when Phastos uses his Uni-mind invention which combines the Eternals’ cosmic energy. Sersi uses this power boost to transmute the Tiahmut into marble stone instead of allowing the Celestial to destroy the Earth to allow life to start again. Arishem the Judge and Prime Celestial issues a warning to the Eternals, telling them that since they sacrificed a Celestial for Earth, he will spare humanity, but the Eternals’ memories will determine if they are worthy to live. Arishem says that he will return later to cast judgment upon them, and disappears into a black hole.

In a post-credits sequence, Thena, Druig, and Makari are aboard the Domo when Pip the Troll enters from a light portal, heralding the royal Prince of Titan, the great adventurer Starfox. He introduces himself (and does some flirting) and announces that he’s also an Eternal, and his name is Eros. He warns that his friends are in big trouble and they know where to find them. He reveals that he has a golden communication sphere and smirks at the three of them, implying a new adventure is about to begin.

Starfox has a long and fascinating history in the Marvel Universe. He first appeared in The Invincible Iron Man #55 by Jim Starlin and Mike Friedrich as the aptly named Eros, inspired by the god of love. Eros was born on Saturn’s moon Titan and he’s the youngest son of two Eternals, A’Lars/Mentor and Sui-San, making him the younger brother of Thanos. These two brothers couldn’t be any more different, however. He has a thirst for adventure and has the ability to stimulate pleasure, euphoria, and arousal in others. This immortal uses cosmic and psionic energy and has superhuman physiology and strength comparable to other Eternals.

Thanos is in a different category when it comes to power levels, however, with mutated DNA that creates physiological variables, and it’s why Thanos has purple skin. Thanos has a literal love of destruction and worships the cosmic embodiment of death. He becomes obsessed with Death and experiments on various Titans, including his own mother, Sui-San. He eventually leaves Titan and continues his mission of destruction all across space. Eros, on the other hand, has a completely different disposition and adventures across space, seeking pleasure and romance traveling to various planets. Eros is more interested in life’s delights than destruction.

Thanos returns to Titan with an army after a century and destroyed many Titans, putting him at odds with his brother Eros. Thanos uses Rick Jones to find the Cosmic Cube, and he was bonded with the superhero Captain Mar-Vell. Eros, Mentor, and Mar-Vell join forces to fight back against Thanos, and win. The victors rebuild Titan after Thanos’ defeat, and Eros and Mar-Vell become good friends who look out for one another. When Mar-Vell learns he’s dying of cancer, Eros promises to protect Mar-Vell’s love, Elysius, and he takes care of their child made using a computer program. Eros might’ve lost a brother, but at least he gained a trustworthy friend after so much hardship.

Eros and Thanos’ brotherly bond is a lot more complicated than it might seem; although they’ve been on opposite sides of conflicts because of Thanos’ destructive ways, Eros has supported him at times, though he usually doesn’t. Eros even joins the Avengers, who have fought Thanos numerous times. Eros goes by “Starfox” because they consider it a more suitable name, and although there’s friction with the team from time to time, Starfox proves to be a valuable member.

During the Kree/Skrull War, Starfox learns about Thanos’ granddaughter, Nebula, and he leaves the Avengers to find her and confirm this information. He returned to help the heroes of Earth from time to time, and has several clashes with the Mad Titan. Starfox leads an army of Eternals against Thanos and his army, but Starfox couldn’t withstand his brother’s sheer power. Later, after a battle with Thanatos, Rick Jones’ super-powered Earth-9309 counterpart, Thanos captures him and implants false memories in his mind.

Siblings often go back and forth trying to outdo one another, but Starfox and Thanos take things to a whole new level.