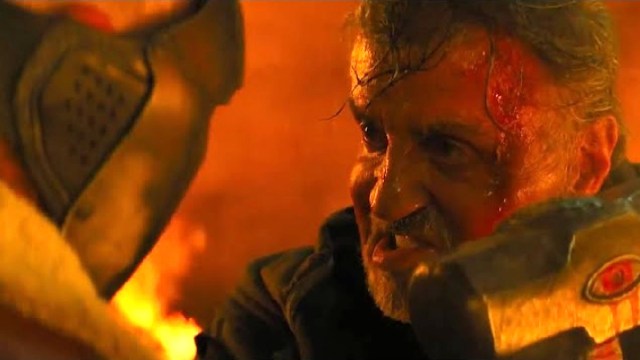 As one of the most iconic figures in the history of the genre, Sylvester Stallone‘s thoughts on the current state of action cinema are well worth listening to. However, that doesn’t mean the 76 year-old can’t come across as being a touch hypocritical.

In a recent interview with The Hollywood Reporter, the Rocky and Rambo legend was asked if he finds it frustrating that so many films these days are reliant on superheroes and CGI to drive both the story and spectacle, with Sly voicing his agreement.

“Yes, it is. [Great action movies are] like buying a vintage watch. Originally it was $35, and now it’s $35,000. Why? Because it’s handmade. It wasn’t over the top. It wasn’t supernatural. It was something a unique human being could achieve. That’s why I think First Blood is one of the first action films.

I relied on body acting to tell the story. The character never talks, but you know exactly what’s going on through the other characters. They’re almost like narrators in his Greek tragedy. The guy never stops moving, and that’s what I call an “action film.” There’s not one CGI shot. The audience goes: That is pretty special.”

While that’s a fair assessment, and one echoed by many of his peers, we can’t overlook the fact that not only did Stallone recently lend support in the Marvel Cinematic Universe’s Guardians of the Galaxy Vol. 2 and the DCU’s The Suicide Squad, but Prime Video’s Samaritan is also a thing that exists.

It’s a Sylvester Stallone action flick where he takes top billing as a superhero, and it’s also one that features some of the weakest digitally-rendered fire effects you’re ever likely to see. It was additionally roundly dismissed by critics after accruing an unremarkable 39 percent rating on Rotten Tomatoes, even if it’s proven to be a solid performer on-demand.

Of course, given that he’s been at the top of the Hollywood tree for almost 50 years, we’re not going to disagree with anything he has to say. Then again, maybe he shouldn’t be so critical of superheroes and CGI when his most recent foray into both at the same time isn’t exactly going to be regarded as a classic.