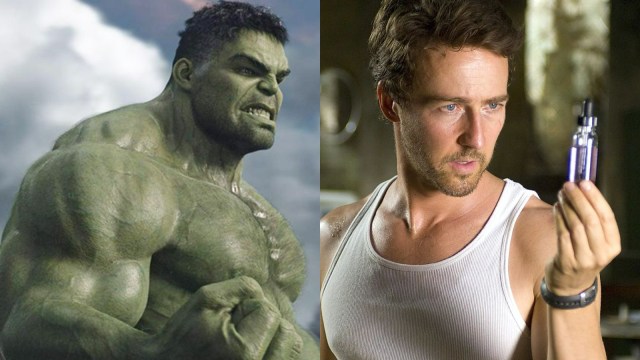 Mark Ruffalo has been our Hulk for the past decade now, having made his debut as Bruce Banner in 2012’s The Avengers, but some long-in-the-tooth Marvel fans still fondly remember Edward Norton’s take from 2008’s The Incredible Hulk. And with Ruffalo back on our screens weekly in She-Hulk: Attorney at Law, the old debate between MCU lovers over which is the better presentation of the Jade Giant has now reawoken on Reddit.

User BlackDabiTodoroki smashed open the conversation by quizzing the r/MarvelStudios community with a two-pronged question: which depiction of Banner do they prefer and which Hulk design are they more partial to? In some cases, the answer was one in the same, but others were much more split between the two.

First of all, Norton loyalists came out of the woodwork to champion the Pulp Fiction star for his (to them) superior portrayal of Bruce as a broken man on the edge.

Is Ruffalo really The Amiable Hulk?

Ruffalo wins for everything else, but Norton might look the part better.

But let’s not forget how scary Ruffalo’s Hulk was in Avengers‘ Helicarrier sequence.

Was Ruffalo’s best performance his very first one?

Norton’s “Body building Hulk” is a big no for some.

Other folks are in two minds, a bit like the character himself.

The contrast between Ruffalo and Norton is particularly prominent in fans’ minds right now following the hilarious meta joke in She-Hulk episode two, in which Bruce looks back on his battle with Abomination and says he was “a completely different person then. Literally.” We see what you did there, Marvel.

Catch new episodes of She-Hulk: Attorney at Law Thursdays on Disney Plus.