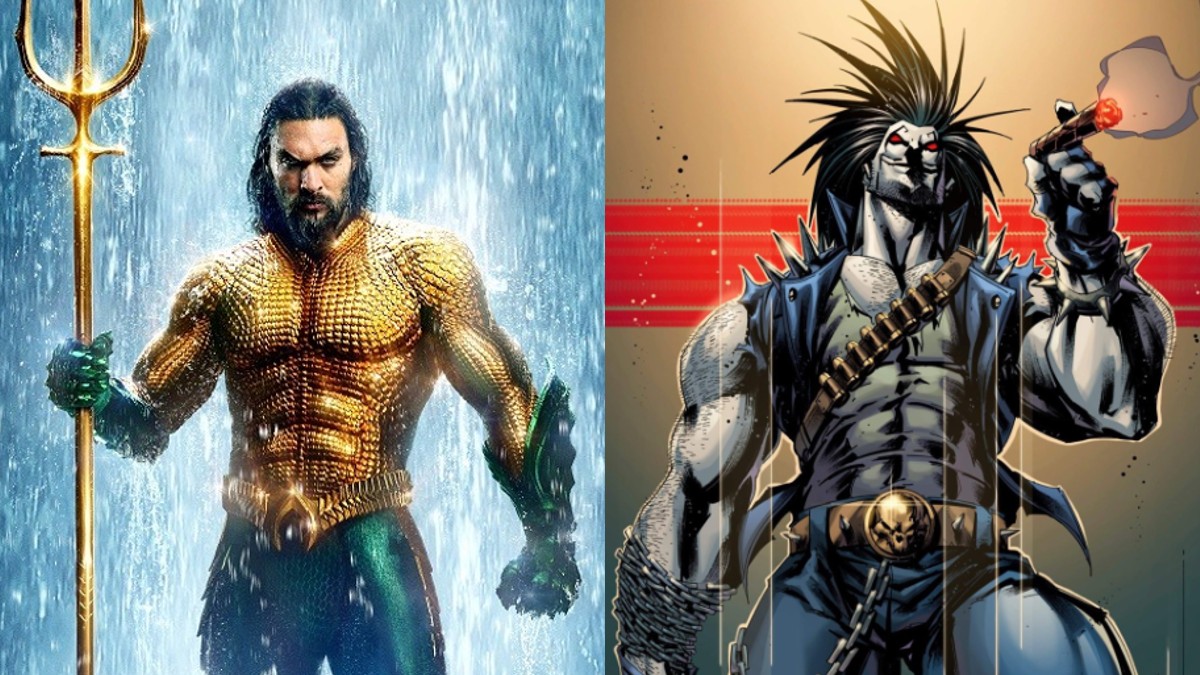 There’s an ocean’s worth of speculation about what’s in store for DC Studios with Peter Safran and James Gunn heading as co-CEOs. One of the topics that has managed to find its way to the top revolves around Aquaman star Jason Momoa leaving the titular role for the alien Lobo. On paper, it probably makes a lot of sense, but there are so many things wrong with this recasting.

The state of the live-action DC Universe is in a state of flux and confusion. It would seem as though the previous DCEU is being scrapped, with Black Adam not getting a sequel, the Wonder Woman trilogy being put on indefinite hold, and Henry Cavill no longer in as Superman following his Black Adam appearance. A new universe is being created by Gunn, who’s writing the next Superman movie, but many fans still want to see their fan-favorite characters from the previous DCEU. This is an understandable reaction given the impact may of these characters have had. The issue in Momoa’s case is that if he were to play Lobo, it sends a very problematic message.

Lobo is an intergalactic bounty hunter from Czarnia who’s got a filthy mouth and is prone to extreme levels of violence. He’s got an enhanced healing factor and uses devastating weaponry to get complete his jobs. Lobo was unlike any other Czarnian on his utopian planet. He was literally born bad, had a fascination with genocide, and killed all the Czarnians, making him the last of his race. His nickname is the “Main Man” and truthfully, Momoa could play the role of a no-holds-barred badass in his sleep. That’s actually kind of the problem; Momoa can do so much more than Lobo, and he showed that in Aquaman.

Momoa as Aquaman was an inspired choice, and should be rewarded for the chance it took. Momoa first appeared in Zack Snyder’s Justice League, and he brought so much to the character. Aquaman is one of the DC heroes that gets made fun of the most because “he talks to fish,” when in actuality he commands sea creatures, but the beauty of casting Momoa in this role is that… no one will be making fun of him. He brought a high level of toughness that made audiences respect the character before he ever uttered a word.

Arthur Curry has been traditionally depicted as a white man with blond hair and blue eyes, and Momoa, who is of Native Hawaiian and Pawnee as well as German and Irish descent, does not have those characteristics. Aquaman’s story is about an outsider, judged for being different, discovering he has a rightful claim to the Atlantean throne. Even his name is given this aspect of duality. Arthur’s father and mother, Thomas Curry and Atlanna, are weathering a storm and listening to a broadcast and Thomas wants to name the baby Arthur. Atlanna asks if he wants to name their son this after the storm, and he says he he wants to name him after the legend. This idea of being torn between two worlds is paramount to the story and is represented throughout the movie.

Atlanna also says, “He’s living proof our people can coexist. He could unite our worlds one day.” This line of dialogue encapsulates the theme of the movie, and Momoa represents this perfectly on a level that goes far deeper than just lip service. Momoa made history by starring in Aquaman, and his Indigenous roots have remained essential to his identity. The actor has tattoos that further demonstrate his reverence for his upbringing and ancestors, and adds a layer to Arthur that he just couldn’t have if Momoa looked exactly like how the character has been traditionally depicted.

Momoa’s family’s Amakua — a sacred ancestral spirit central to family, spiritual, and personal identity in Native Hawaiian culture — is a shark (manō), and it’s represented by a triangle pattern on his arm. The actor also performed haka, a traditional ceremonial dance from New Zealand’s Maori culture, which like Hawaiian culture is Polynesian, on the red carpet premiere of Aquaman in Los Angeles. He performed alongside his onscreen father, Temuera Morrison, who’s also of Polynesian descent, and it felt like a triumphant moment. Arthur Curry isn’t just another superhero role for a Hollywood actor; Momoa, like Morrison, already bears a deep affinity with the character’s connection to the ocean. These elements elevated the story and made it feel more relevant for our modern times.

All too often, we see a lack of diversity when it comes to representing the Other, the X-men movie franchise being one example. Mutants are meant to represent oppressed people who are unfairly judged by society, and yet the characters those movies choose to focus on don’t look that much different, diverse-representation-wise, than any other movie. It weakens the overall story when those who don’t visually represent the group of people they’re meant to represent are cast and spotlighted to maintain the status quo. The supposed reason for these misguided assumptions about mass appeal are superficial; it’s a lie that only non-white movies are unsuccessful, and yet it’s perpetuated to eliminate efforts of meaningful representation.

Black Panther and its sequel Black Panther: Wakanda Forever have proven that Black superhero movies can be immensely profitable, and yet for all the Black and POC heroes that exist, the number of upcoming projects doesn’t reflect that. It took the MCU 17 other movies before Chadwick Boseman led the film as T’Challa, and the film went on to be nominated for six Academy Awards, winning three for costume design, production design, and original score. Angela Bassett recently won the Golden Globe for her role as Queen Ramonda in Wakanda Forever, making it first time an MCU has achieved such an honor. And for the record, both Black Panther and Aquaman are in the top 10 best-selling superhero movies of all time.

To reiterate: Aquaman made bank. Many DC naysayers cite DC’s lack of consistent box office wins as a determiner of its quality, but Aquaman is the only DCEU film to make over $1 billion dollars, ranking above even The Dark Knight and The Joker. It’s been a huge success for DC, and yet it’s not treated as such by many fans and Warner Bros. itself. Director James Wan hasn’t been given the proper credit for his work in overcoming the odds, either. Normally, a director with a big hit would be given more leverage in the universe, and yet that hasn’t been the case for Wan.

Wan helmed the acclaimed Swamp Thing series, which was unceremoniously canceled after one episode, and his movie featuring Black Manta titled The Trench was canceled before it officially began. Now, Black Manta actor Yahya Mateen-Abdul II has been chosen as the MCU’s Wonder Man following the announcement of Gunn’s role at DC Studios. The behind-the-scenes story of Aquaman is one of unfairness and missed opportunities.

Many fans are not enthused at the prospect of Momoa becoming Lobo, and there’s a problematic element when it comes to casting people of color in such roles. Momoa was originally known for his role as Khal Drogo in Game of Thrones. Drogo led his nation of Dothraki horse riders beyond the free cities. Momoa turned in a great performance, but it’s all too easy to depict someone like Momoa as a bloodthirsty warrior. It runs into ugly stereotypes that should’ve been dismantled long ago, and yet there are people crying for more of the same.

Guardians of the Galaxy star Dave Bautista, who’s of Filipino and Greek descent, said that he’s tired of being put into a box. In an interview with Digital Spy, he said, “When I first got into acting, everybody wanted these big, dumb muscle-heads. I really fought it. I turned down a lot of roles because I didn’t want to be typecast as that guy. I wanted to do characters who are, you know, interesting and multi-layered.” Then, in an interview with Variety, Bautista said that Drax was a “silly performance” and he wants to do more “dramatic stuff.” These actors can do so much more than what people often want them to do.

Momoa’s and Wan’s contributions to DC aren’t being considered in the conversations surrounding a potential Lobo casting. Aquaman had a meaningful message that dared to venture into unknown territories where most other movies provide audiences with more of the same. It’s been one of DC’s biggest success stories and yet that’s being disregarded in favor of Momoa being typecast in a role that he and others like him have too often been depicted as. He showed the world that Aquaman could visually represent an outsider, and his achievements reminded those who don’t see themselves onscreen as the heroes can be more than what the media says they are.

In Aquaman, Momoa got to defy stereotypes and play not just a hero, but a member of the Justice League. This isn’t just any superhero, it’s one of DC’s most powerful characters who have a legacy that’s lasted for decades. He first appeared in 1941 in More Fun Comics #73 by Gardner F. Fox, Jerry Siegel, and Mort Weisinger, only three years after Superman, and his longevity is a testament tot his resounding impact on fans. Momoa’s casting as Aquaman transcended any restrictions placed on the time the character was created in.

His background was used as an asset that propelled the story in a new and needed direction. To take him from the King of the Seas to a loud-mouthed bounty hunter fixated on killing would be a detrimental and an unimaginative choice to make.