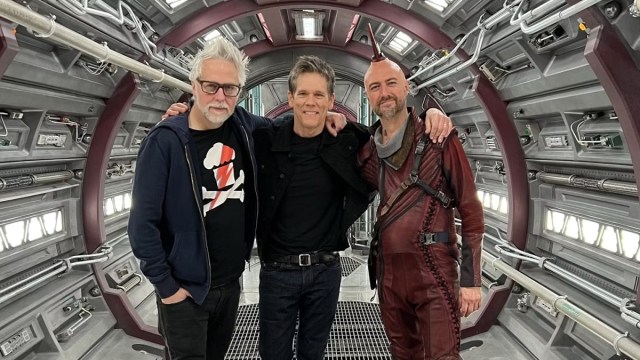 Even before he was appointed co-CEO of DC Studios, James Gunn was hardly shy in admitting that Guardians of the Galaxy Vol. 3 would mark the end of his association with the Marvel Cinematic Universe’s marquee band of irreverent cosmic misfits.

Given that Kevin Feige was the first person he told about his first step up the corporate ladder, though, it’s clear the two have a great personal and professional respect for each other. No top-level executive in Hollywood stays in their job forever, so could The Suicide Squad and Peacemaker creator end up back in the warm embrace of Marvel Studios one day in the future?

It certainly isn’t going to happen for a long time, but a curious response to a question posed from a fan on Twitter has left the tiniest little ember burning. Gunn is very careful when wording his tweets so as to provide total honesty and transparency to his millions of followers, so it’s inevitable his supporters will pick up on the phrase “for the time being.”

By the time Gunn and compatriot Peter Safran fulfill their decade-long outline for the future of the DCU, both superhero franchises are going to be unrecognizable from where they are today. Of course, we’re not suggesting that he’s going to complete his obligations to the competition and then dive right back into the MCU once more, but it’s nonetheless interesting that he didn’t call Guardians of the Galaxy Vol. 3 his “last thing” for Marvel ever, so the door remains ever so slightly ajar.