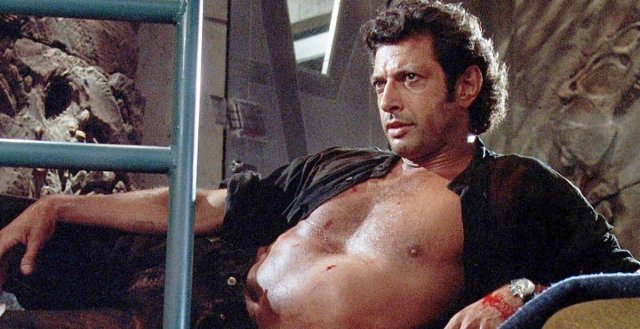 Eccentric chaos theorist Dr. Ian Malcom is a fan-favorite character of Jurassic Park fans. Not only does the scientist provide the franchise with some of its most memorable lines, but he also became the first film’s breakout shirt scene after appearing nigh-shirtless in one of the original movie’s most famous scenes. But Jeff Goldblum says he almost wasn’t in the movie.

Goldblum, who originated the role of Malcolm in the first film and reprised the role in The Lost World: Jurassic Park, Jurassic World: Fallen Kingdom, and most recently in Jurassic World Dominion recently confirmed to Late Late Show host James Corden that when he was being considered for the part, director Steven Spielberg was in the midst of rewrites and the character of Malcolm, who had appeared in the original novel by Michael Crichton, was probably going to be written out of the film.

But Goldblum, uh, found a way to keep the character in. Having read the book he explained to the director why Malcolm should stay in the picture. However, the actor modestly handwaved away the notion that his argument was what led to the character getting back up off the cutting room floor, telling Corden:

“I didn’t do anything I was just lucky but it’s true. Mr. Steven Speilberg, the great and brilliant Steven Speilberg, we had a meeting and they said read this book, Michael Crichton, and there’s this part in it and he met me and he said, ‘this is moot at this point I think because it’s going through revisions and the part is no more. And you know I said well before I leave off the top of my head, I read the book, here’s why that character might be interesting and you know more about stories than I do but I think that character could be special. Anyway, I’m sure that had no impact but luckily, coincidentally the character wound up in the thing and I played that part for a few movies.”

Whether it was Goldblum’s defense or just common sense we may never know but the decision to keep Malcolm proved to be a great one. The character is arguably the most popular in the entire franchise. And let’s not forget that he utters the best line in the series.