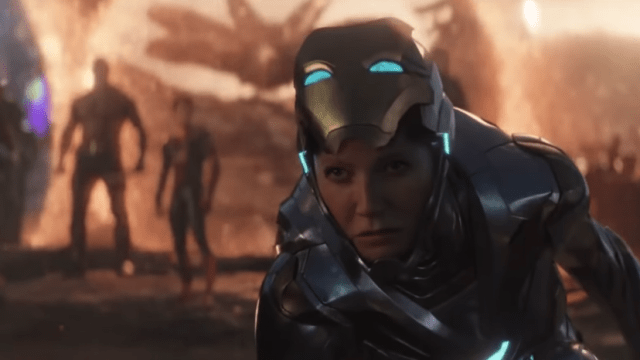 Right before the climactic battle in Avengers: Endgame, the newly resurrected Doctor Strange turned to Wong and asked, “Is that everyone?” We the audience knew the answer to be a resounding yes; there wasn’t a single body missed during the final throwdown of the Infinity Saga, and to make matters even more impressive, it seemed that everyone got their big moment in the fight, too.

And one of the most rousing appearances of them was Pepper Potts. They aided Iron Man and co. with the help of the Rescue armor, allowing her to participate in the fight as formidably as the rest of the MCU‘s more seasoned champions.

This has led some MCU faithful to speculate on Potts’ future on the battlefield, and whether we’ll see Gwyneth Paltrow sign back on to a Marvel project with a host of her own combat scenes.

One pointed out that Stark’s and Potts’ daughter, Morgan, could instead be the one to take up the next Iron Man-tle, which wouldn’t necessarily rule out Potts as a mentor figure, given her experience with the Rescue armor.

Others debated Gwyneth Paltrow’s interest in ever returning to the MCU, with some suggesting she has none, others suggesting the opposite, and others still believing that she would, but in smaller roles exclusively.

And one other user dropped the “could it happen?” and replaced it with “do I want this to happen?” Evidently, the answer was no.

It looks like Rescue will be confined to Endgame‘s climax for now, but, as with all things involved with the mind of Kevin Feige, it would be unwise to rule anything out.