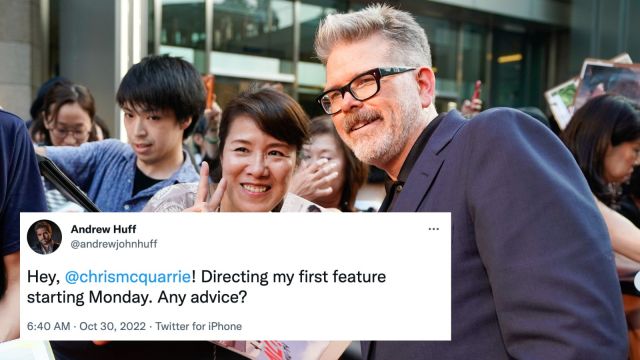 It’s not every day that you’d get career-saving advice from those who made it, let alone if you’re only starting. Luckily for one aspiring filmmaker, they received advice from Christopher McQuarrie, the director for the Mission: Impossible films, and writer for Top Gun: Maverick.

Andrew Huff publically messaged McQuarrie on Twitter, asking for directing advice ahead of working on their first feature film. McQuarrie replied to the young filmmaker, telling them to take care of themselves physically, be open-minded, and be themselves. Such easy and simple advice, especially for those staring out.

Huff expressed gratitude to McQuarrie, saying that his advice is helpful, especially since one of the film’s locations is in the woods.

People who saw McQuarrie’s advice agreed to his tips, with some saying that one of them became some sort of industry standard. People pointed out that they saw crew members wearing comfortable shoes while on set. Meanwhile, one user shared alternatives to using a director chair if it’s unavailable.

Fans appreciated McQuarrie for passing down useful advice to newcomers in the field. People wished Huff luck on Twitter after the famous director replied to his question online.

McQuarrie started his film career in 1993 but it wasn’t until 1995 that he received multiple screenwriting awards for The Usual Suspects.