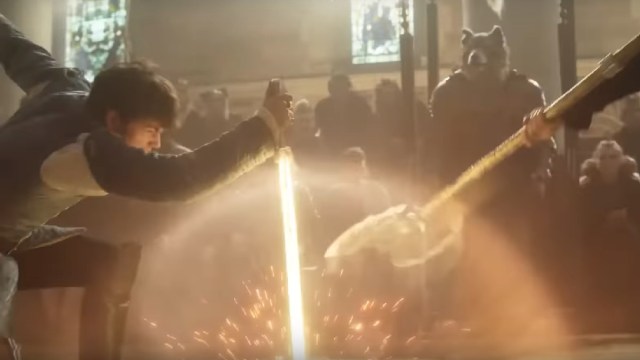 The top brass at Netflix have never been shy in admitting that the streaming service remains on the hunt for a marquee blockbuster franchise of its own that has the potential to rival the likes of Star Wars, Harry Potter, and the Marvel Cinematic Universe when it comes to popularity and cultural impact. If the company keeps churning out forgettable dreck like The School for Good and Evil, though, the wait is poised to go on for a long time to come.

There’s plenty of talent attached to the lavish fantasy adaptation on either side of the camera, but director Paul Feig appears to have taken his cues from the derided Ghostbusters reboot as opposed to his acclaimed comedies Bridesmaids, Spy, and The Heat. Invoking almost every big budget fantasy under the sun, the movie is ripe with cliche and drowning in formula, despite the best efforts of the stacked cast to inject some much-needed life into the proceedings.

A 39 percent score on Rotten Tomatoes indicates that Netflix have once again dropped the ball when it comes to transparent saga-starting opening chapters, with the butt-numbing 147-minute epic falling into virtually all of the same traps as the rest of the platform’s alarmingly generic expensive fare. That being said, just like those aforementioned titles, The School for Good and Evil has shrugged off poor reviews to become an instant smash hit where it really matters.

As per FlixPatrol, it only took the literary adaptation 24 hours to become the number one most-watched feature in 58 countries around the world. Reviews were tepid, but the fan responses have been a great deal more enthusiastic, so perhaps those sequels that are evidently on the docket will materialize after all.