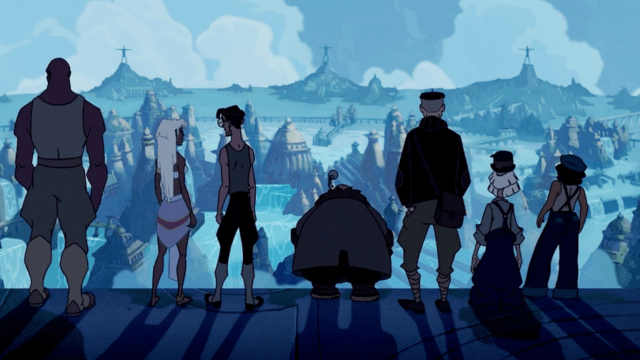 It’s no secret that Hollywood is obsessed with making movies set underwater. From the 1954 film 20,000 Leagues Under the Sea to the upcoming Avatar: The Way of Water, moviegoers have been treated to aquatic cinematic delights and the genre shows no sign of slowing down.

There are many great underwater kingdoms in cinema, so we decided to rank some of our favorites. We cannot stress it enough; Hollywood is really into underwater films so this is by no means a complete list, but we tried to include as many iconic aquatic cities and kingdoms found in film as possible.

Without further ado, here’s our ranking of Hollywood’s hottest underwater kingdoms that remind us it really is better down where it’s wetter…

Ariel’s homeland is the underwater city of Atlantica, the palace King Triton and her late mother Queen Athena rule. The first Little Mermaid doesn’t really delve into the place — other than how much Ariel wants to leave it for the human world — but its existence is explored more in the short-lived Little Mermaid cartoon and the 2008 film The Little Mermaid: Ariel’s Beginning. The city seems pretty cool but a little underdeveloped compared to other cities on this list.

Some might say that Vulcania doesn’t count as underwater since the majority of the island appears to be above ground. We do see Captain Nemo lead the Nautilus into the island via an underwater path and the official Tokyo Disney restaurant is modeled after an underwater cavern on the island, so we’ve decided it counts. In the film, we don’t see much of the island but the few glimpses we get are enough to land it on our list.

We can’t make a list of the best underwater worlds in film (there is a SpongeBob SquarePants cinematic universe, remember) without mentioning Bikini Bottom, SpongeBob’s home. Bikini Bottom looks idyllic and we would love to have our own pineapple under the sea. It might not be as grand as some of these underwater worlds but Bikini Bottom just feels like home to those of us who grew up with the series.

Pandora is less of a kingdom or even a city as it’s rather the name for the moon the Na’vi call their home. The world is beautiful to look at but we still don’t know everything about Pandora, especially the underwater civilization shown in trailers for The Way of Water. Perhaps when the movie comes out, the breathtaking Pandora can move higher up on our list.

BioShock isn’t a film yet but a Netflix adaptation is currently underway and we’ve decided the dystopian city of Rapture is too cool to not include. Rapture is an art deco city designed to be a utopia for the elite of society until the usage of a superpower-giving substance called “ADAM” leads to a civil war that destroys much of the city and leaves many citizens mutated beyond recognition. The setting is exciting to explore and we’re looking forward to viewing the film version of Rapture soon.

In the original source material, Wakanda Forever‘s Namor is originally from Atlantis but in the new film, his home is the underwater city of Talokan, a kingdom based off of Mayan myths. Many fans appreciated the change and the creators behind the film worked with Mayan history experts to accurately portray the spectacular underwater kingdom. We agree with the fans and think this city is a great historical alternative to the often-used Atlantis and a fantastic way to highlight Mayan culture. Which leads into our number one pick…

It might be the obvious pick but we have to give the top spot to Atlantis. The underwater kingdom is portrayed in so many films — Aquaman, Atlantis: The Lost Empire, and Stargate all come to mind — to varying levels of success. However, Atlantis is a classic for a reason and we’re suckers for stories where the lost city thrives in modern times after its descent into the ocean. No matter the media, we know we’re in for a treat when Atlantis is involved.

That’s it for our ranking of our favorite underwater kingdoms in film. We’re sure Hollywood’s obsession with underwater cities won’t end anytime soon and we look forward to seeing more movies based in the wonderful worlds under the sea.