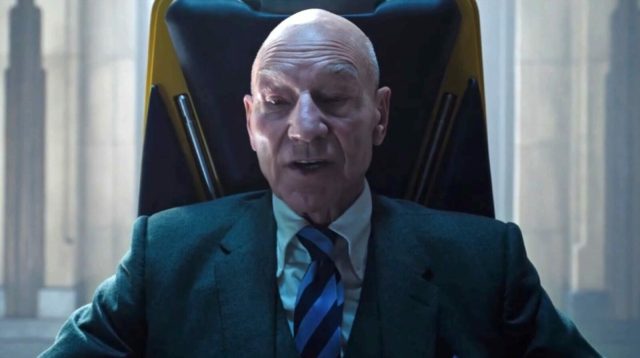 Yorkshire-born Patrick Stewart wore the finest Yorkshire fabric as Professor Charles Xavier in Doctor Strange in the Multiverse of Madness.

Xavier’s suit was designed by iconic British tailoring company Savile Row. According to Doctor Strange 2 costume designer Graham Churchyard in Inverse magazine, the ensemble was “made from scratch in London and sent to [Stewart’s] home in LA” where “he was working on [Star Trek:] Picard Season 2.” They did a Zoom fitting, and Stewart was ecstatic that the suit was comprised of “Yorkshire woolen fabric.” The legendary actor was born in Mirfield, West Riding of Yorkshire, England, on July 13, 1940.

The suit took on another layer of meaning when Churchyard learned that Stewart’s mother worked as a weaver, likely crafting similar outfits:

“His mother had worked in the mills back in the day. He was thrilled to get a proper Savile Row-made suit.”

Churchyard also confirmed that Stewart’s costume was made to resemble not the Professor X from the X-Men movies, but Professor X from X-Men: The Animated Series. He credited Marvel Studios president Kevin Feige for the inspiration:

“Kevin had given us the inspiration from the get-go. There was no question he was that character in the animated series, with the yellow wheelchair. We did the green suit and striped tie. Kevin was thrilled we recaptured the green suit, because that was the vibe he was trying to bring to the screen.”

Check out Stewart’s nostalgic threads in Doctor Strange in the Multiverse of Madness, which is in theaters across the world.