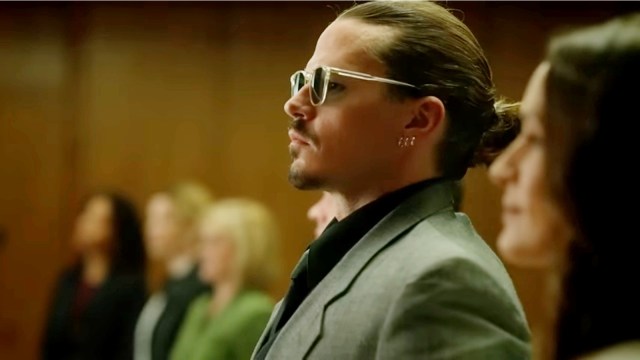 A mere few months after the conclusion of a highly publicized defamation trial amongst Hollywood stars, we’re already getting the trailer for a biopic, Hot Take: The Depp/Heard Trial, that many people on social media are proclaiming to be a wholly unnecessary retelling.

The Tubi original film’s trailer dropped on Wednesday, prompting many people to ask why we needed such a movie in the first place. This is an especially prescient question when you consider the film is not a documentary, but a dramatic narrative retelling with actors playing the roles of the real-life people at the trial’s center. Specifically, the film stars Mark Hapka as Johnny Depp and Megan Davis as Amber Heard.

For one Twitter user, a GIF of Jeff Bridges’ The Dude giving a puzzled look from The Big Lebowski was the only way to summarize their thoughts on the matter.

Another commentator rightfully questioned how good the quality of the film could truly be, given the fact that the trial on which it is based only wrapped up in June.

“I obviously don’t mind movies and shows about real events, but it’s way too soon.”

“You gotta be kidding me! This thing looks like it was filmed in my high school drama class,” one Twitter user wrote while lamenting how very different the actors look from the real people they’re portraying. “What a joke.”

“I can’t believe they’re making a f–king movie on the Depp/Heard trial,” another user put it succinctly.

Andy Signore, the creator of the YouTube show Honest Trailers, was quick to proclaim Hot Take as looking “HILARIOUSLY BAD!”

“Johnny Depp & Amber Heard Supporters, I hope we can agree on ONE THING: This looks like HOT GARBAGE!”

If you want to roll the dice and check out Hot Take: The Depp/Heard Trial, it comes to Tubi on Sept. 30.