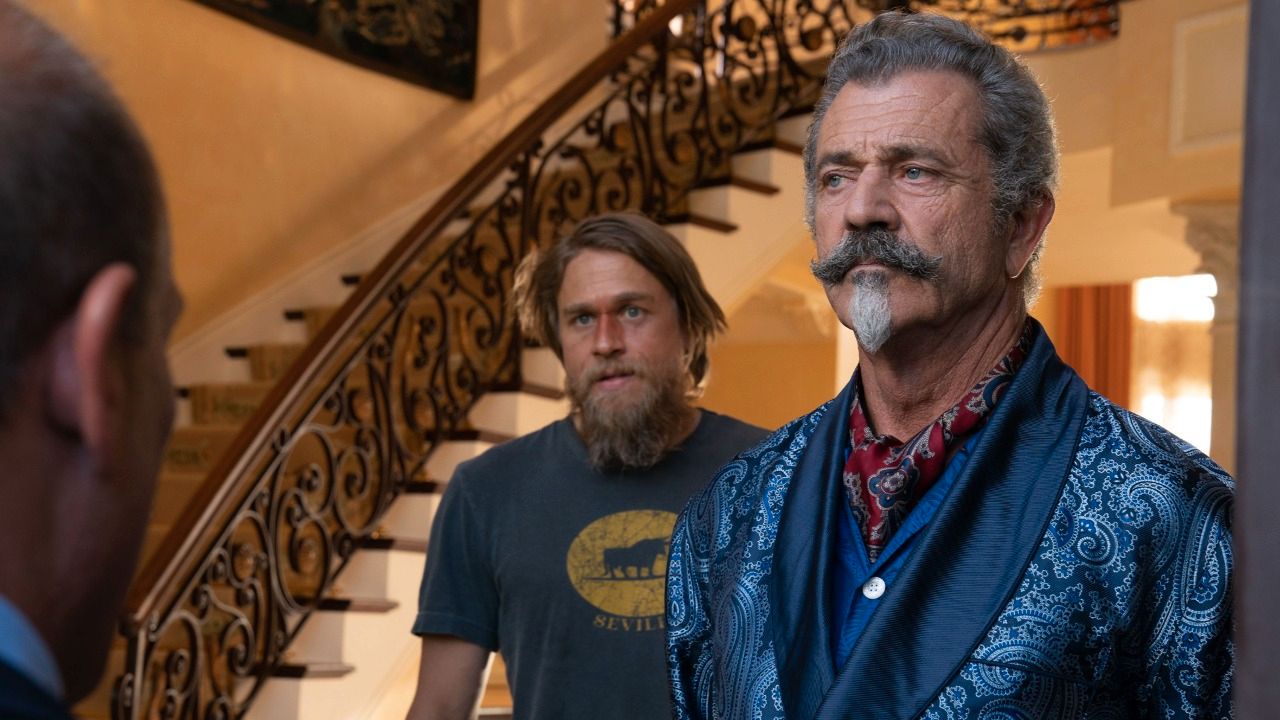 Last Looks doesn't bring anything new to the table, but it's a fun crime caper that makes us want to see Charlie Hunnam's Charlie Waldo again.

Tim Kirkby’s Last Looks has been a long time coming. The literary adaptation was first announced in 2018, and shot the following summer, but it’s only now getting a theatrical and on-demand release.

The burning question is whether or not the twisting modern-day noir is worth the wait, and the answer will largely depend on your tolerance for wisecracking mystery thrillers that weave a labyrinthine web of double-crosses and revelations, and whether or not you can handle the controversial Mel Gibson having an absolute blast in a scenery-chewing supporting role.

Things start off as eccentrically as they mean to continue, introducing us to Charlie Hunnam’s former cop and current private investigator Charlie Waldo, who lives a ramshackle existence off the beaten track, a lifestyle that dictates he’s only allowed to own 100 things at any given time. Why? It doesn’t really matter, even if it’s regularly brought up as one of the character’s unique foibles, but it makes for a fun recurring gag.

Morena Baccarin shows up on the scene as old flame Lorena Nascimento, who tries to enlist Waldo’s help in her current and most pressing case. Famed British thespian and current star of popular TV show Johnnie’s Bench Alistair Pinch (as played by Gibson) has been accused of murdering his wife, which sets off a chain of events that threatens to become nonsensically convoluted in double-quick time.

It goes without saying that there’s always an awful lot going on in Last Looks, which can often be to the detriment of the movie itself when the various threads become tangled to the point you begin to think they may never unravel satisfactorily. It does eventually click, though, to become the sort of sun-baked Los Angeles crime caper that was all the rage in the 1990s once Quentin Tarantino had laid out the new blueprint for American independent cinema.

That’s not a knock on the film at all, which is helped immensely by Hunnam’s lead performance. The former Sons of Anarchy star is a much better actor than he often gets credit for, and he’s clearly invested in Last Looks given that he’s also listed as one of the producers.

He never treats the idiosyncratic material too seriously, nor does he allow his work to devolve too far into the farcical, which is just as well because Gibson and Scipio in particular have that beat well covered. Waldo gives off the air of a man that’s resigned himself to doing the right thing, simply because it’s the right thing to do, even if it’s obvious that he’d rather not get involved at all.

Last Looks is undoubtedly formulaic, almost to a fault, but there’s a propulsive sense of energy that positions it as a cut above the dozens upon dozens of similar titles that feature meandering voiceovers, an ensemble of character actors painting archetypal figures in broad strokes, and a mandated plot twist that occurs what feels like every ten minutes.

Waldo’s commitment to his newfound existence sees him wearily hop on a bicycle to criss-cross his way around L.A., and he finds himself caught up in all of the shenanigans you’d expect. The missing and presumed dead ex-lover, a dalliance with a woman tied directly to his case, the arrogant suit-clad Hollywood players, wealthy benefactors hiding secrets, a suspect destined for the slammer with the evidence pointing overwhelmingly against them, several beatings at the hands of his enemies, and knocking back bourbon in smoky dive bars are all present and accounted for, but Last Looks positively revels in being almost exactly what you want, hope, and expect it to be.

Regardless of how you feel about Gibson on a personal level, he’s an over-the-top hoot as Pinch. Adopting the hammiest accent you’re likely to hear all year, the grizzled veteran fully commits to the material by stopping just a millimeter or two short of winking directly at the audience, and he bounces off Hunnam fantastically as their polar opposite personalities eventually dovetail in pursuit of the same goal.

Having both he and Hunnam play so steadfastly against type does help create an air of unpredictability as to where Last Looks is ultimately heading, even if the machinations are eventually revealed via the tried and trusted method of having the lead spew a lengthy monologue to the perpetrator, tying everything back to the various hints and clues to have been dropped throughout the running time.

Again, it isn’t necessarily a bad thing, because Last Looks never sets out a stall to reinvent the wheel, even in the slightest. The tropes and trappings are incredibly familiar, but there’s such an infectious sense of upbeat and irreverent energy to everything that happens you can’t help but let it slide.

Below the Line, the second installment in Gould’s Charlie Waldo series, was published in August of 2019. There’s no guarantees it’ll happen, but we definitely wouldn’t be against the idea of seeing Hunnam reprise the role at least one more time based on what Last Looks brings to the table.

Last Looks doesn't bring anything new to the table, but it's a fun crime caper that makes us want to see Charlie Hunnam's Charlie Waldo again.