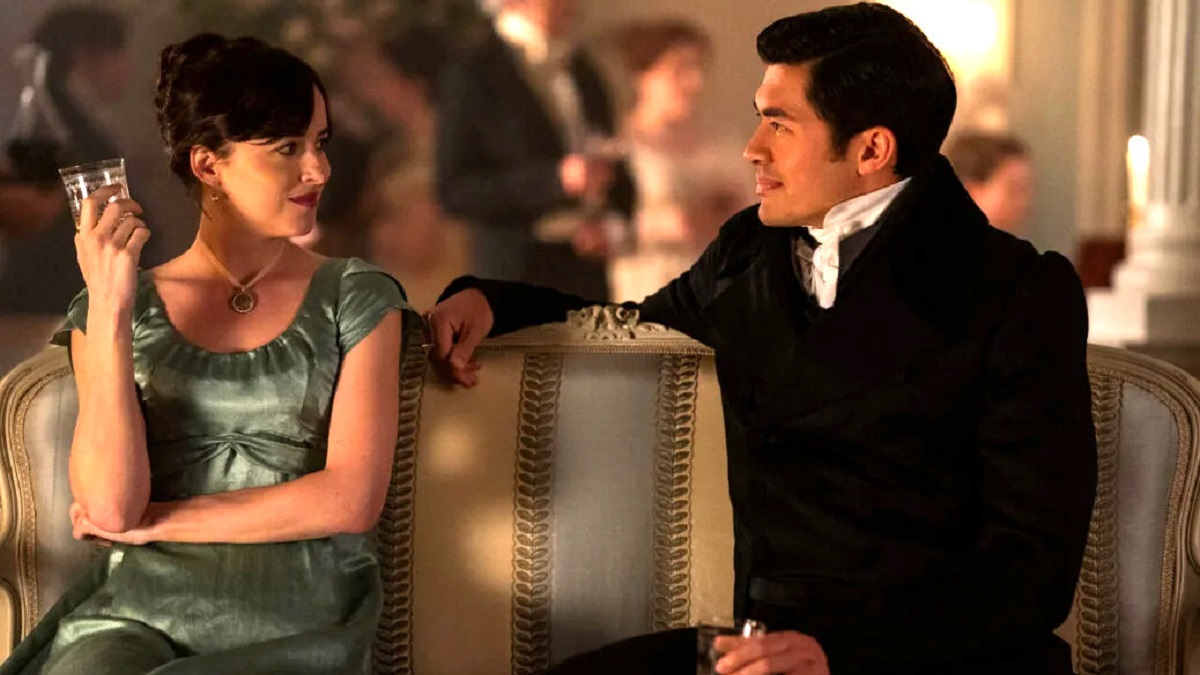 via Netflix
Review of: Review: 'Persuasion' is more than a disaster - it's an insult to audiences

'Persuasion' is a disastrously misguided Jane Austen adaptation that condescends, talks down to, and tries to hand-hold its audience at every turn.

Adaptations are tricky. There are a million ways to bring a classic novel or well-loved story to the screen, and not all of them work. In fact, some of them can be total disasters. Netflix’s Jane Austen adaptation Persuasion is worse than disastrous – it’s condescending.

The film tells the story of Anne Elliot (Dakota Johnson, we’ll get into that later) as she deals with the grief of ending things with her old flame, Wentworth (Cosmo Jarvis). It’s been eight years since she was “persuaded” to call things off with him because of his station, despite loving him dearly. She deeply regrets it, and her old feelings only intensify as she encounters Wentworth once again. Things get messy from there, and the movie tries to make this mess as relatable as possible, to its complete detriment.

That’s right folks, the minds behind this movie, screenwriters Ron Bass and Alice Victoria, have decided that the best way to bring another Austen novel to the youth is to give it the Fleabag treatment. It doesn’t work, full stop. Frankly, it insults the audience. There are “knowing” looks to the camera from Anne, fourth wall-breaking narration, and anachronisms like “self-care” and allusions to girlboss wine mom culture peppered among the lines of dialogue.

The greatest sin of all is not the anachronism of the choices made, it’s in the way the movie feels proud of them – like it’s finally giving audiences an Austen adaptation for the people when in reality, it treats its audience like a flailing child. And besides, Clueless is right there!

There are other, non dialogue-related choices that are baffling as well. Take, for instance, the use of giant title cards announcing the names of houses and manors we’re at with Anne at every turn. It feels like an even clunkier way of holding the audience’s hand through the movie – as if we’ll be completely adrift without the movie spoon-feeding us every little thing.

The condescension spills out into the visual language as well, taking from the likes of Joe Wright’s Pride & Prejudice and Cyrano. It’s safe to say that a lot of other fare in this genre has cribbed from the filmmaker since 2005, but here, the choice feels like another way to talk down to audiences. It’s almost as if the movie is saying, “You liked it in 2005? It must be the only way to do it then! How else will people know we’re serious about this story?”. The thing is, because of this weird mix of trying-too-hard humor and “serious” lush visuals, the tone of the piece is almost as messy as Johnson’s Anne Elliot.

Indeed, not even the stacked and criminally-underused cast could save Persuasion. Johnson is at her best when she’s Anne reacting to her environment, her fellow actors, and/or her situation. It all falls apart when she shifts her eyes to the camera and gives us a “Can y’all believe this?” look. Henry Golding, who plays Anne’s second love interest, Mr. Elliot, is perhaps the most wasted actor in the movie. Don’t let the heavy advertisement of his presence fool you, he only shows up for the last third.

Golding at least makes his screentime count, though, crafting a charming and lovely performance with what he gets. Other honorable mentions of under-utilized actors include Richard E. Grant as Anne’s father, Sir Walter Elliot, and Nikki Amuka-Bird as Lady Russell, so it’s clearly a recurring theme across the board.

I will say, despite its condescending nature and ill-fated attempts to hold the audience’s hand all the way through, there were a few moments that earn a chuckle, and even a swoon or two. Persuasion might be worth your time if you’re curious and have an extra hour or two on your hands, or if you ever wanted a little more #girlboss energy in your period pieces. However, there’s no point trying much harder than this to persuade you to see it.

Review: 'Persuasion' is more than a disaster - it's an insult to audiences

'Persuasion' is a disastrously misguided Jane Austen adaptation that condescends, talks down to, and tries to hand-hold its audience at every turn.