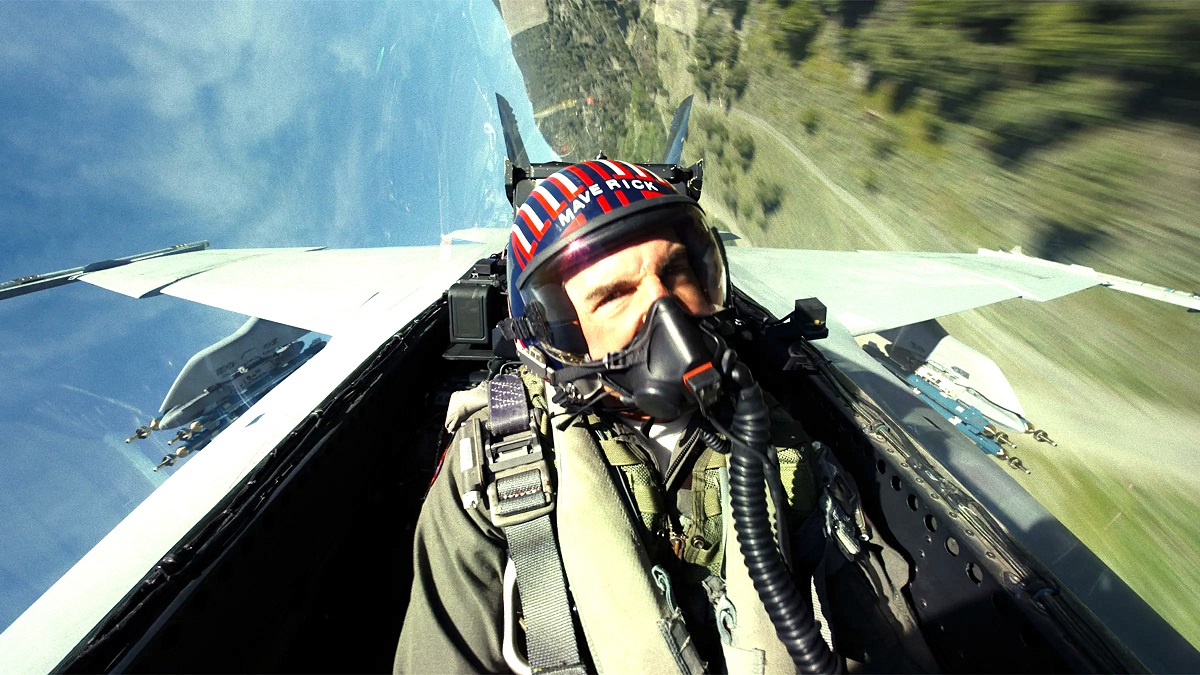 via Paramount
Review of: Review: 'Top Gun: Maverick' is here to save cinema

'Top Gun: Maverick' overachieves on every level, within a running time which flies by too quickly. Everything people are saying is true, everything others have written should be believed, because blockbusters are back.

Believe the hype; Top Gun: Maverick is worthy of every column inch of praise declaring Tom Cruise as the savior of cinema. The action-packed sequel over 30 years in the making has more heart than any number of summer blockbusters with twice the star power.

Director Joseph Kosinski, who guided Cruise through the underrated sci-fi epic Oblivion, apparently shot over 800 hours of footage for this film to painstakingly craft some of the most exhilarating aerial shots ever put on screen, utilizing state-of-the-art cockpit cameras.

Meanwhile, Cruise took time out to master fighter jets, before putting all his other would-be aviators through flight school, adding an undeniable edge of authenticity to every frame, a fact which is self-evident as Top Gun: Maverick seeks to win back the hearts and minds of cinema audiences everywhere.

However, what makes this the blockbuster to beat in 2022 is more complex than any degree of the male posturing that defined its predecessor. The sequel brings back a Pete ‘Maverick’ Mitchell wracked with guilt, perpetually trapped in a past he can never change. This older and no less erratic iteration can barely keep himself in check, as flashbacks cleverly weave in plot points from Tony Scott’s original to drip feed the nostalgia.

That need for redemption over the death of Goose (Anthony Edwards) is a recurring theme which writers Ehren Kruger, Eric Warren Singer, and Christopher McQuarrie deploy with devastating ease. Not only does the thematic undercurrent inform the popcorn thrills, but it puts the audience in the driving seat from minute one through the means of old-fashioned storytelling, with Maverick exceeding all expectations as a result.

With a Rear Admiral (Ed Harris) looking to consign him to the scrapheap, Maverick is press-ganged into training an elite group of hotshot pilots for a black op mission. Among this motley crew of miscreants is son of his old wingman, Bradley ‘Rooster’ Bradshaw (Miles Teller), who brings back nothing but bad memories.

His competition comes in the form of Natasha ‘Phoenix’ Trace (Monica Barbaro), Jake ‘Hangman’ Seresin (Glen Powell) and Reuben ‘Payback’ Fitch (Jay Ellis), with each one slotting perfectly in place, elevating the film in the process. However, any real drama is saved primarily for Teller and Cruise, who play their cards perfectly.

Jon Hamm also holds his own as Beau ‘Cyclone’ Simpson, being both Maverick’s harshest critic and his fiercest ally come those final credits. Between our intrepid protagonist, Hamm, and Jennifer Connelly’s Penny Benjamin (admittedly a role which barely passes for paper thin in terms of token female), Top Gun: Maverick offers audiences plenty to get behind.

However, amongst all those whistles and bells, there is an astonishingly understated performance from Val Kilmer as Tom ‘Iceman’ Kazansky. An actor who was away from our screens for some time due to illness, Maverick gives Kilmer an opportunity to shine in almost complete silence, alongside his old Top Gun adversary.

There is a poignancy between these two actors which is undeniable, as old friends who come together to share some unspoken catharsis. Amid the cutting-edge action sequences, concisely penned dialogue and inherent nostalgia, this moment feels organic rather than contrived. Coming at a crucial moment story-wise, it simultaneously ties off the past while making way for something new.

Beyond the perfectly poised storytelling, awe-inspiring visuals and pulsing soundtrack, Maverick also possesses another important intangible. It brings out a feeling that’s arguably been missing from the multiplex for too long, where you will literally be able to hear a pin drop. Either that, or you won’t be able to hear a thing over the roar of jet engines, or spontaneous cheers erupting from nowhere, or feverish clapping from crowds swept up in the moment. It’s an experience.

With standing ovations and universal admiration, alongside Cruise delivering some of his best work in years, cinema is finally back for good. Galvanizing public opinion through communal joy, defined through themes of progression and advancement, against a backdrop of fighter jets and old-fashioned military machismo, topped by a story celebrating the underdog spirit which exists in us all.

If anything, that is what Top Gun: Maverick achieves on every level, within a running time which flies by too quickly. Everything people are saying is true, and everything others have written should be believed, because blockbusters are back.

Review: 'Top Gun: Maverick' is here to save cinema

'Top Gun: Maverick' overachieves on every level, within a running time which flies by too quickly. Everything people are saying is true, everything others have written should be believed, because blockbusters are back.