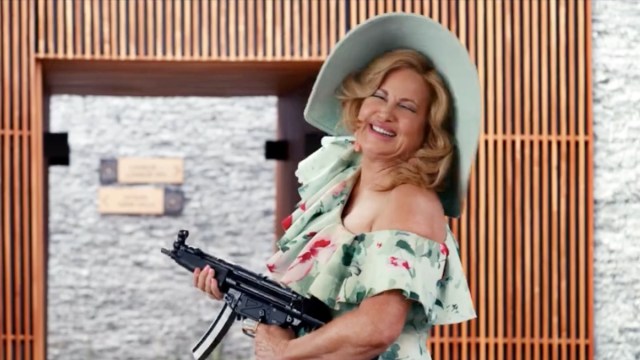 Jennifer Lopez is starring in her umpteenth wedding-themed romantic comedy, Shotgun Wedding, opposite Josh Duhamel, which is scheduled to be released on Prime Video in January after the streamer acquired the rights from Lionsgate earlier this year. But after the official trailer was released on Tuesday, all anyone can talk about is supporting cast member Jennifer Coolidge, the newly-minted Emmy-winning actress who is having a bit of a moment right now, suffice it to say.

The film centers on engaged couple Darcy and Tom (Lopez and Duhamel) who get their “lovable but very opinionated families” together for the ultimate destination wedding. However, just as the couple get cold feet, the entire wedding party is taken hostage, forcing them to work together to save their loved ones “if they don’t end up killing each other first.”

It seems like pretty much standard fare, as far as wedding rom-coms go (with a bit of Amy Schumer’s 2017 comedy Snatched thrown in for good measure), and the trailer may very well have been overlooked by the fickle eyes of the internet had it not been for the inclusion of Coolidge, who comes in literally guns blazing with a machine gun. We repeat — Jennifer Coolidge with a machine gun.

This is not a drill, people!

Unfortunately, however, some took umbrage with the fact that at 61, Coolidge is just 12 years older than Duhamel, whose mother she plays in the movie. Though the considerably younger Armie Hammer was originally slated to play the male lead (but was replaced for, uh, obvious reasons), it’s unclear whether the casting of Coolidge came before or after the shakeup.

Still, the oversight was enough to rile up a few diehard Coolidge fans.

In addition to catching Coolidge in the upcoming second season of HBO’s The White Lotus on Oct. 30, Shotgun Wedding hits Amazon Prime Video on Jan. 27, 2023.