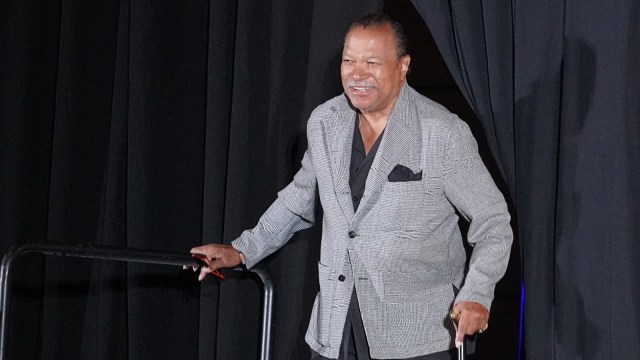 Billy Dee Williams‘ Lando Calrissian, who first appeared in 1980’s Star Wars: Episode V- The Empire Strikes Back, isn’t a Jedi. But it’s worth wondering if he were a Jedi, what lightsaber color would he have?

Lando is a character who isn’t a straightforward hero, but more so embraces a roguish lifestyle similar to his pal, Harrison Ford’s Han Solo. For instance, Lando tricked Han, Carrie Fisher’s Princess Leia, and Mark Hamill’s Luke Skywalker, into being caught by the villain Darth Vader. However, this was due to being strong-armed by Vader in a deal gone wrong, and Lando eventually rejoined the rebel group to help Han escape his imprisonment from Jabba the Hutt. Ultimately, Lando had a heroic arc over the course of The Empires Strikes Back and Return of the Jedi, despite the character having a bit of a bad-boy streak.

Williams addressed this hypothetical when a fan asked him at a recent Rose City Comic Con panel in Portland, Oregon: “If you were a Jedi, what color would your lightsaber be?”

“Blue,” was Williams’ short-but-sweet response that generated cheers amongst the crowd.

In case you need to brush up on your Star Wars lore, blue lightsabers are generally considered to be ones wielded by the good guys, such as Obi-Wan Kenobi and even Anakin Skywalker’s pre-dark side saber. Green, the preferred lightsaber of Luke, is also generally considered the kind the good guys use, while red is a color generally reserved for the baddies, such as Darth Vader and Kylo Ren.

In that same panel, Williams talked about his early life as an accomplished painter, an artform he has returned to throughout the years, including creating a multimedia piece inspired by The Empire Strikes Back. As an artist, it isn’t entirely surprising to hear he also considers the craftsmen of films like Star Wars and Batman to be the real “unsung heroes” of the films he starred in.

Though most people today probably recognize Williams as being from Star Wars, Derek Maki, Williams’ appearance manager, explained during the panel that the actor was already so iconic at the time that the producers of The Empire Strikes Back specifically approached him for the role and didn’t even ask him to audition. That puts Williams in a rare peer group, whose only other members include Alec Guinness and Peter Cushing, as actors who were specifically hand-picked for their star power to appear in Star Wars, rather than being relatively unknown actors at the time.

One of Williams’ biggest roles before Star Wars was appearing in the film Brian’s Song alongside James Caan as the football player Gale Sayers, with whom he said he was good friends.

Williams also teased at the panel that he’s currently working on his memoirs, slated for release in 2023, in case you want to hear more about his “absurd, crazy life,” as he put it.