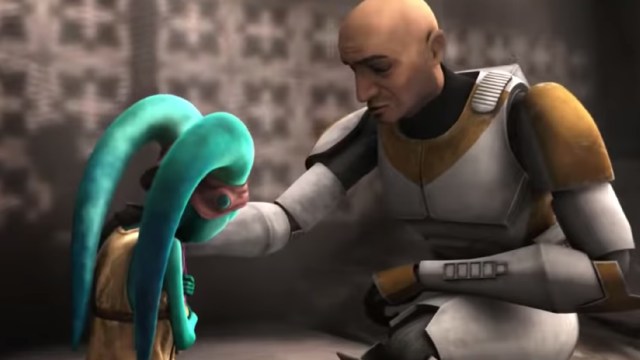 The Star Wars universe is absolutely rife with intriguing characters of all races, origins, and backgrounds.

Many of the characters that take center stage in Star Wars creations are human, but that is set to change with the official debut of Ahsoka on Disney Plus. The upcoming series will star Ahsoka Tano in the lead role, making history as the first Star Wars series to divert from human-centric stories.

The Ahsoka series will also likely include some of the clones fans are familiar with from existing Star Wars media. Fans who’ve kept their focus solely on the live-action films won’t recall much about the identical characters that were introduced in Attack of the Clones, but hardcore fans of the franchise have fallen in love with countless clones over the years. A number of favorites debuted across the Star Wars animated series, many of whom fought alongside Ahsoka and Anakin during the years-long Clone Wars that preceded the rise of the Empire and the destruction of the Jedi.

Fans are already looking forward to seeing several of their favorite clones appear in live-action—sometimes for the first time—with treasured characters like Rex being listed as potential additions to the Ahsoka cast. As viewers set their gazes on the live-action introductions of some of these beloved characters, we’re taking a look at the very best clones in the Star Wars universe.

The best clones in the Star Wars universe, ranked

Hundreds of thousands of clones have made their mark on the Star Wars universe, but some made more of an impact than others. Several of the franchise’s spin-off series orient themselves around the various clones that fought in the Clone Wars, as well as the few that survived Order 66 unscathed. These series helped to cement characters like Rex, Cody, and Omega as permanent favorites among many in the fandom, taking up residence in fan’s brains and purchasing real estate. They might look alike, but not all clones are cut from the same cloth, so here are the 10 best clones in the Star Wars universe, ranked from worst to best.

He doesn’t have the name recognition of characters like Rex or Cody, but Waxer is an enduring favorite among fans of The Clone Wars. Charming and sweet with a clear soft spot for kids, Waxer is easily one of the most slept-on clones in the entire Star Wars universe. He stands out from many of his brethren in his persistent empathy, which he showcases pretty much any time he’s on screen.

A character who’s legacy unfortunately outlived his actual presence in the Star Wars story, Hevy is fondly remembered by fans of the Clone Wars series. The capable rookie clone entered the story as a relatively typical “lone wolf” stereotype, but soon proved himself to be far more nuanced and capable than he initially seemed. He quickly established himself as an adept leader and reliable ally, but the same heroic personality that made him a quick fan-favorite led him to sacrifice himself on the Rishi Moon Outpost, trading his life for the cause.

A truly cherished member of the Clone Wars lineup, 99 is a malformed clone that serves as a sort of father figure to many of his fellow clones. He isn’t counted among the clone troopers, given his inability to perform in combat, but his empathy and careful guidance left an indelible mark on several of the clones he served with. Following his death, he was mourned as a true warrior after giving his life trying to aid in the Battle of Kamino.

One of the most charming members of the Bad Batch lineup, Wrecker is a former clone commando turned deserter. His love for explosives makes him an essential member of any team he’s on, as do his massive size and impressive strength. He was among the “defective” clones who were unaffected by Order 66, and were left to watch in bafflement as their formerly loyal brethren turned on the Jedi. His delightful dialogue helps to keep things light in The Bad Batch, and quickly cemented him as a favorite among fans.

Obi-Wan Kenobi’s commander is one of the few clones to make a prominent appearance in the live-action Star Wars films. Exclusively live-action viewers will likely remember him largely in the wake of Order 66, but fans of The Clone Wars know Commander Cody as he was before his inhibitor chip forced him to turn on his friends and allies. His steadfast resolve mirrors that of his Jedi companion, and his impact on the Star Wars universe—and his longtime friend Rex—remains long after his departure from the franchise.

The only female clone, Omega has yet to make any live-action appearances, but that isn’t stopping hardcore Star Wars fans from obsessing over her. She’s one of the main characters in The Bad Batch, serving as the heart for many of its hardened members. Her inexperienced but optimistic nature is perfectly paired against her far gruffer counterparts, and many fans believe she’ll serve a vital role in the future.

Arguably one of the best characters in the entire Clone Wars series, clone trooper Fives boasts a level of depth that is simply unexpected in a series that is largely aimed at children. His efforts nearly led to the early reveal of the clones’ inhibitor chips, after he discovered the insidious Order 66 plot and attempted to expose it. While these efforts unfortunately fell short, his impact lived far past the unfortunate trooper. He never managed to warn General Kenobi or Ahsoka about Chancellor Palpatine or the Sith, but his work was ultimately instrumental in the fight.

One of far too-few clone troopers to crop up in both The Clone Wars and The Bad Batch, Echo is one of Star Wars’ most fleshed-out characters. He earned his nickname early on, thanks to a tendency to repeat orders. He entered the story as an overly-dedicated trooper, to the point of annoyance, but grew immensely over the course of several seasons. His transformation is more affecting than many of those in the Star Wars story, and exemplify the quietly stellar storytelling sprinkled throughout the animated series.

Of all the clones in the extended Star Wars series, Rex is a clear favorite among viewers. He crops up consistently throughout both the Clone Wars and Rebels series, serving as a capable warrior, steadfast leader, and loyal companion to a number of the franchise’s most beloved characters. His relationship with Ahsoka, in particular, tugs on fans’ heartstrings, and his persistent presence in her life has fans dreaming up a Rex cameo or two in the character’s upcoming live-action series. Even the Star Wars creators love Rex, retconning the franchise canon wherever they can to wedge the beloved clone trooper in.

A chunk of the Star Wars fandom completely ignores the supplemented animated series, and these fans will never know the glory that is young Boba Fett. The franchise explored the infamous bounty hunter in his younger years via The Clone Wars, providing a far deeper look at one of the franchise’s most widely-known names. Even surface-level Star Wars fans are familiar with Boba, however, despite the fact that many may not remember his origins as a clone. He’s technically not a clone trooper, and he sports entirely unaltered Jango genes, but Boba is a clear winner among his clone brethren. Despite his often malicious leanings, the popular bounty hunter persists as one of the most popular characters in the entire Star Wars franchise. When stacked up against mainstays like Han Solo, Luke Skywalker, and even beloved newcomers like Poe Dameron, his popularity is a truly impressive feat.