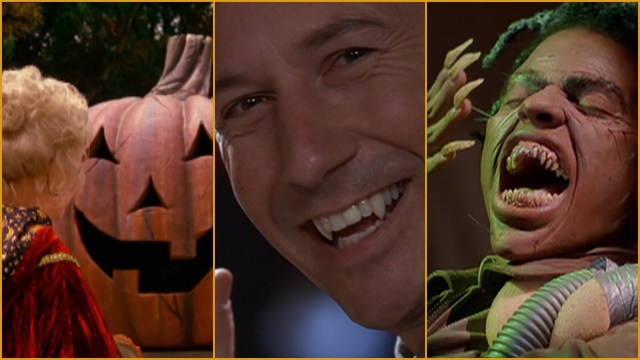 For many of us, the ever-popular Disney Channel television network is chock-full of nostalgic memories and childhood goodies that still resonate with us as adults. And while competitive channels like Nickelodeon and Cartoon Network undoubtedly provided endless hours of spine-tingling spooky content, Disney Channel is unequivocally the home to copious Halloween-themed movies that feature an engaging narrative, a star-studded cast list, and relatable characters that made us feel immortal while following along as innocent children.

While blockbuster hits from the Mouse House have centered around big-name flicks like Hocus Pocus and The Nightmare Before Christmas (dang, 1993 was quite a year!), it’s the low-budget hidden gems that were produced solely via the Disney Channel that have remained unmatchable. Throughout the years, these fun-filled extravaganzas have focused on vampires, witches, mummies, monsters, goblins, and ghosts — and we have fondly remembered each and every one of them for their stark originality and unforgettable status in pop culture. So, let’s take a definitive look back at the 10 best Disney Channel original Halloween movies.

As one of the more modern features on this list, it’s evident that Invisible Sister doesn’t carry the same weight of nostalgia compared to the others. Despite the Paul Hoen project never actually being billed as a Halloween movie in particular, the eerie premise definitely fits the spooky environment surrounding the month of October — especially considering the movie was released on Disney Channel back in October 2015. In the film, teenage student Cleo, in an effort to create a mind-blowing science experiment for class, turns her older sister Molly completely invisible. The film obviously fails to turn the wheels, but it remains an enjoyable movie with strong writing.

The significance of a Disney Channel original movie would seemingly be nothing without the inclusion of teen drama — which Girl vs. Monster perfectly displays throughout its runtime. The film’s eye-opening premise revolves around teenager Skylar who, on the night before Halloween, discovers that she is actually a fifth-generation monster hunter and that her bloodline contains a far-stretched list of fellow hunters. Despite its glaring flaws, Girl vs. Monster is a timeless Halloween staple that unveils a collection of karaoke-worthy songs — including a “Monster Mash” rendition. It just doesn’t get more Halloween than that.

Taking it back to the soaring ‘90s, Under Wraps is one of Disney Channel’s most memorable Halloween flicks — simply for the fact that the film’s iconic mummy mascot is embedded into the hearts, minds, and brains of Generation Z. Introduced back in 1997 as Disney Channel’s first Halloween-themed original film, the festive DCOM centers around a group of teenage friends who discover an ancient Egyptian mummy in the basement of a recently deceased neighbor. The friends eventually take the mummy, although eventually discover that it must be returned in order to prevent it from never existing again. It’s an unforgettable Halloween treat that deserves to be on your watchlist this spooky season.

Many roller coaster aficionados are familiar with the iconic drop tower ride at Disney’s Hollywood Studios, however, some Halloween fanatics may not be as clued in with the DCOM, which was released back in the late ‘90s. And while many Halloween treasures are rightfully included in this lineup, Tower of Terror is arguably one of the most underrated. In similar fashion to the theme park attraction, the film follows a journalist who carefully investigates a complicated death case that occurred at The Hollywood Tower Hotel. With picture-perfect ghostly encounters and terrifying sequences, Tower of Terror might not be a favorite amongst toughened critics, but it still rings in as a memorable Halloween staple.

When discussing the most underrated DCOM selections on this list, Mom’s Got a Date With a Vampire surely sits near the top. With standout performances from Sabrina the Teenage Witch’s Carolina Rhea and The Nanny’s Charles Shaughnessy, the ever-popular Disney Channel classic centers around a brother and sister duo who set their recently divorced mother up on a blind date — which just so happens to be with a mysterious and arrogant vampire. Before the vampire craze in teen drama ruined their reputation, the blood-sucking figures were seen as monstrous threats that are supposed to refrain from contact with humans. It’s a sure-fire Disney gem that deserves a rewatch this October.

Cracking into the top five must-watch Disney Channel films, Twitches has undoubtedly become a pop culture phenomenon, which can certainly be attributed to the knockout duo performances from Tia and Tamera Mowry. In the 2005 classic, the Mowry twins star as Alexandra Fielding and Camryn Barnes — a pair of spell-casting twin sisters who were initially separated at birth, only to reunite in an attempt to engage in an ancient witching war. Throughout the movie, the twins must join forces to defend their homeland against an otherworldly threat with mighty powers. Although the premise at times can seem extremely cheesy, the movie has achieved its unmoving status as a cult classic.

Without question, The Scream Team is one of those underrated Disney Channel originals that deserves the recognition it never fully receives. In the highly entertaining Halloween flick, a brother and sister duo align with a ghost-hunting group in an effort to visit their grandfather in the afterlife. Unlike other installments on this list, the Kathy Najimy vehicle perfectly juxtaposes fear, emotion, and humor in a way that feels both organic and authentic. Although the movie is criminally left out of many DCOM lists, there’s no denying that The Scream Team deserves its warranted spot in the top five.

The year of 2000 was definitely one of the most profitable years for Disney Channel — especially when it comes to its abundance of Halloween-themed movies during the century-shifting year. Sitting near the top, Phantom of the Megaplex sought to retell a vintage Phantom of the Opera-esque tale by implementing it on the DCOM lineup. In the comedy-mystery classic, a teenage movie theater assistant and his pals experience a multitude of strange occurrences during a movie premiere at the local megaplex. With spine-tingling scenarios and unforgettable characters, it would be criminal to not include the ‘00s classic in the top three.

As one of the creepiest, eeriest, most frightening features that Disney Channel has ever presented, it comes as no surprise that Don’t Look Under the Bed clocks in as one of the top two. In the bone-chilling extravaganza, a teenage girl teams up with her younger brother’s imaginary friend to take on the Boogeyman — a terrifying creature that serves as the movie’s protagonist. Considered to be one of the scariest movies ever produced by Disney Channel, the film conveys plenty of Halloween-esque elements — which includes eye-popping visual effects, bloodied makeup, and plenty of frights in-between. With that said, it’s a haunting classic that should be added to all watchlists.

Was there ever actually any doubt? Let’s be honest, Halloweentown absolutely changed the game for Disney Channel, with many considering the Halloween classic to be one of the biggest attractions for the Mouse House network. Centering around witches Marnie Piper and Aggie Cromwell, the festive feature celebrated everything intriguing about Halloween — from bags of sweet candy to smile-stretched pumpkins. Perhaps one of the most alluring aspects about Halloweentown, however, is its undeniable ability to be enjoyed by family members of all ages. Simply put, it really isn’t spooky season without watching the film at least once. As a result, Halloweentown comfortably sits at the best Disney Channel original Halloween movie.