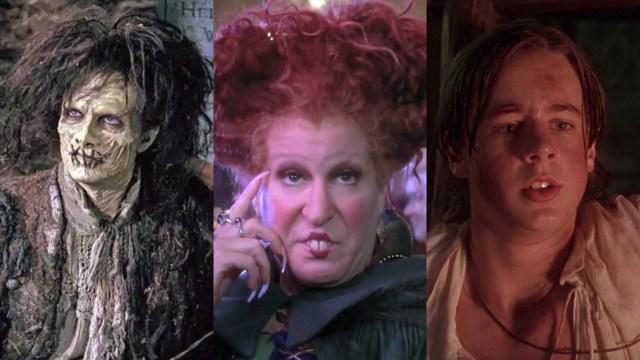 For over two decades, family-friendly extravaganza Hocus Pocus has been a fun-filled and wacky staple in Halloween lore — which eventually helped to establish its legacy as one of the most influential Halloween movies of all time. From Bette Midler’s legendary musical number to Thackery Binx’s beloved immortality, the Kenny Ortega vehicle is chock-full of memorable moments that are still talked about to this day. And despite lackluster success both critically and commercially, the movie has since garnered a colossal cult following through streaming and cable marathons.

In the film, Max Dennison, Max’s crush Allison, and Max’s younger sister Dani accidentally unleash the horrid Sanderson sisters — witches Winifred, Sarah, and Mary — who have been in a slumber for centuries. Amid the chaos, there are a handful of scintillating characters introduced in the film that have assisted with the movie’s stark popularity over the years. And, undoubtedly, some characters are certainly more endearing than others.

So, before the much-anticipated sequel Hocus Pocus 2 lands on Disney Plus next month, here are the 10 best Hocus Pocus characters, ranked by likability.

In Hocus Pocus, eagle-eyed viewers meet Ernie — a persistent bully that relies on fear and harassment to achieve what he wants, much like his accomplice Jay, the bully duo Max Dennison and his sister Dani, and other kids in the Salem area. While his immaturity is obviously on display, and his bullying ways might fade as he grows up, Ernie is still a menacing character that makes Max’s life a lot more difficult than it needs to be. Even though some fans consider the Sanderson sisters to be the true villains in the story, Ernie is easily the most unlikable character.

As one of the bullies that constantly harasses Max, it’s not hard to understand why Jay sits at the bottom of this list. Along with Ernie, both boys are unlikable characters who seek out and torment other teenagers in the town of Salem. As the muscle of the operation, Jay utilizes his brute force and strength to overpower Max and other kids in Salem to get what he wants — which includes forcefully taking Max’s shoes with Ernie. As a result, Jay is a thoughtless bully that is definitely one of the worst characters in the Halloween classic.

As one of the Sanderson sisters, it makes sense to include Mary Sanderson toward the bottom of the list. Along with her two sisters, Mary intends to hunt down children in Salem to feed upon them — which includes Max, Dani, and Allison. Although, there is a particular naivety within Mary’s personality that certainly makes her seem less evil than her two sisters. In hindsight, Mary offers plenty of comedic relief, especially when she flies through the dark skies on a vacuum cleaner rather than a typical witch’s broomstick. Still, she is often seen in the background and is definitely the least valued sister, which actually makes her unlikable in the long run.

While some viewers find Winifred the most intriguing character in Hocus Pocus, it doesn’t make her any less unlikable. Technically, Winifred is the main antagonist in the movie, seeing as she is the leader of the group and persuades her sisters to join her in hunting children. And, if the act of just wanting to kill children wasn’t bad enough, actually acting on the impulse is even worse — and Winifred accomplishes this when she “kills” Thackery Binx’s sister Emily and then turns him into a black cat. While Winifred is undoubtedly the brains of the operation, that’s the very trait that makes her unlikable.

As one of the main protagonists of the movie, it seems plausible to include Max at the top of the list. However, he undoubtedly possesses unlikable qualities that leave his rightful spot up in the air. For instance, Max lights the black-flame candle against the group’s wishes, and inadvertently causes trouble for himself, Allison, and Dani. Throughout the movie, it becomes clear that Max is unknowingly selfish, and that he often makes decisions that suit him. Nevertheless, he eventually undergoes character growth and looks out for Allison and his sister in the end, which still places him right in the middle of this list.

Despite her role as a child-hunting antagonist, Sarah Sanderson is easily the most likable out of the Sanderson trio. Her personality is extremely bubbly, which results in her wandering off and constantly babbling incoherent gibberish to herself. Unlike Winifred, Sarah doesn’t seem as evil and destructive at heart. Instead, she seems to find the laughter and joy in the simplest things — even if that includes a rare bad occasion such as when she drained Emily Binx of her life. Still, Sarah’s likability is miles ahead of both sisters, and with a standout performance from Sarah Jessica Parker, she deserves this spot.

You would think that the ex-boyfriend of Winifred Sanderson would be just as cold and calculated as she is, and with a mangled skeleton and ripped clothing, Billy does appear to be terrifying. However, Billy is actually a victim of Winifred’s, having been dead for over 300 years after she placed a curse upon him. Once he awakens, he eventually explains to Max, Dani, and Allison that he wants to help protect them from the Sanderson trio. Billy eventually makes good on his promise when he protects Dani against Winifred, and establishes his genuine likability in the process.

Allison is introduced in Hocus Pocus as Max’s crush and a fellow classmate at his school. Unlike Max’s bullies, Allison is exceptionally warm to him and even rushes to his rescue in later scenes in the movie. In the face of adversity, Allison uses her knowledge and tactical skills to help the group battle the Sanderson sisters. During the film, Allison is rarely scared and never turns away from a challenge, no matter what the witches throw in her direction. As a result, Allison is certainly one of the most likable characters in the movie, and fans are hopeful to see her in the upcoming sequel.

As the outspoken, witty, fun-filled younger sister of Max, Dani Dennison is undoubtedly one of the most likable characters in the fantasy extravaganza. In times of doubt, Dani is often there to encourage Max to stand up to his bullies and defend himself — especially when the Sanderson sisters assist with the bullying. Despite her desperation to enjoy a nice, quiet night of trick-or-treating with Max, Dani helps her brother and Allison to battle against the Sanderson trio. Dani remains the only young child in the movie — with the exception of Emily Binx — and the bravery that she harbors alone makes her extremely likable.

Unsurprisingly, out of the handful of scintillating characters in Hocus Pocus, Thackery Binx is the most likable by a mile. Early on, the fanbase witnesses Thackery’s bravery as he attempts to stand up against the Sanderson sisters and retrieve his sister Emily. After Emily’s death, Winifred places a curse on Thackery and transforms him into a black cat. Eventually, the trio of Max, Allison, and Dani unknowingly rescue him, and in return, he becomes devoted to protecting them from Winifred and her sisters. In the end, Thackery is reunited with Emily for good, and his character arc establishes him as a lifelong hero and friend.