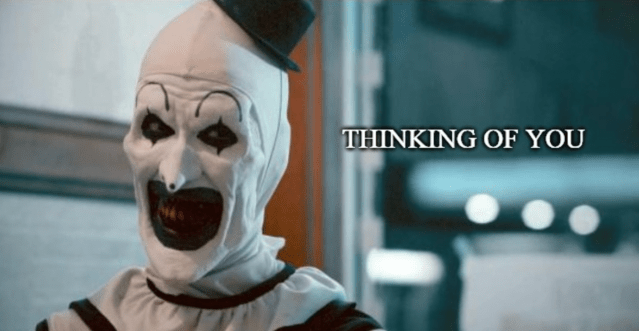 WARNING: Some of the entries in this list contain graphic images.

It’s an arguable standpoint to insist that contemporary society would be extremely dull without the inclusion of gut-busting memes of all varieties. In recent years, memes have become an integral part of entertaining folks on the internet and keeping the search engines fueled. And while other catalogs are swarming with an array of colorful memes, the cosmic horror bubble is a harder cesspool to fully explore — although the latest spine-tingling genre treasure might have skyrocketed the number of memes that are hitting the worldwide web.

Upon its release, Damien Leone’s Terrifier 2, which serves as a sequel to 2016’s Terrifier, has caused an undeniable amount of mayhem amongst horror fans, with a plethora of moviegoers passing out, vomiting, or fainting while watching the newest horror spectacle in theaters. And while the movie has done well to successfully gross out even the most hardcore horror fans, it has simultaneously provided an endless amount of meme content that somehow reduces the film’s fear factor. So, before Terrifier 3 further fuels the frightening fire, here are the 10 best Terrifier memes that will make you less afraid of the movies.

1. Flower glasses was not on our bingo cards

It’s safe to say that while horror fanatics were awaiting the arrival of Terrifier 2, the inclusion of villain Art the Clown donning flower-inspired glasses was not on anyone’s bingo card. Still, considering Art’s body language and movement have always been a significant element of his repertoire, it actually makes sense that the writers would have Art showcase a pair of beautiful pink glasses before embarking on a vicious rampage of torment and murder. Truthfully, Art somehow pulls off the look, despite being a psychopathic killer with no inch of remorse.

Let’s be honest, we’ve all been here. It’s that feeling of when you’re sitting patiently at your table as one of the serves brings out a giant tray of various food dishes. Immediately, we assume the server is bringing the food to our table, when it’s actually for a different table that ordered just a few minutes before you. But rather than describe the situation second-by-second, the depiction of the scenario is perfectly conveyed through Art the Clown’s iconic body language — which includes a variety of smiles, frowns, and all-around weirdness.

3. Halloween is my personality

For many of us, Halloween is an essential part of our personality — so much so that we transform into our true selves the minute the clock strikes midnight in October. For the majority of Halloween hardcores, black cats, witches, spell-books, and candy corn is an important part of the spooky experience. As a result, there are times where others are so familiar with our Halloween fascination that we become labeled with the spine-tingling holiday. And while some might see such a reference as an insult, the Halloween-loving masses know that an exclamation like that is nothing short of a complement. Keep on Halloweening, you spooktacular junkies.

True romantics will tell you that a smile is worth a thousand words. You could be unemployed and broke, you could have an oddly-placed lazy eye, or you could have an overpowering stench of body odor. It all seems pointless as long as you have a breathtaking, wide-stretched smile that leaves ‘em all weak in the knees. And while Terrifier’s Art the Clown might boast a widened smile, it is certainly the farthest thing from attractive — although the meme above seems to argue that Art’s smile is a thing of beauty. Such a stance has been taken in a jokingly way, of course, with a scene from Netflix’s 13 Reasons Why incorporated in the meme and used as humorous material.

Ever heard of liquid courage? In case you haven’t, it’s that extra layer of bravery that all of us get once we’ve downed a considerable amount of liquor. For most people, taking a selfie while sober doesn’t exactly come as easy as when we’ve had a few drinks. Alcohol has this specific way of loosening up inhibitions and allowing us to be our natural selves, which subsequently results in an added boost of confidence. As a result, the drunk selfies start pouring in faster than a large bottle of vodka — which is hilariously depicted in a scene from Terrifier where Art steals a victim’s phone and takes a selfie.

It happens all the time. From Scary Movie 2 (2001) to Scooby-Doo (2002), the mind-boggling idea for characters to split up is often a focal point in the plot. And while these characters go through with the idea and believe it to be critical, intelligent viewers watching at home are left puzzled as to why the idea was ever presented in the first place. Splitting up is probably one of the worst steps to take in a horror movie, seeing as the killer usually just targets the group with less people — and especially if someone is split up from the rest of the pack and off by themselves. Basically, splitting up is an idiotic move — and Art’s expression in this meme speaks volumes about it.

Who doesn’t absolutely love being called beautiful? When bad days come around, there’s nothing more uplifting than when your significant other proclaims just how beautiful you are. Simply slipping into the passenger seat of the car when they pick you up and hearing those positive words is enough to put a smile on your face that stretches a mile long. Of course, none of us have days as brutal and graphic as Art the Clown, but it’s still pleasant to receive affirmation on a day when you need it the most.

8. Cut ’em out with no regrets

Sometimes in life, there are particularly toxic people that deserve to be singled out and removed from your life. Not only will it benefit your overall mental health, but it will provide you stability and the confidence to know that you can control your own happiness. However, a large portion of folks might consider it difficult to cut people out of their lives, seeing as not everyone bears a hardness that allows them to make rash decisions without feeling guilty. On the other side of the spectrum, there are a fair amount of people that will cut someone out of their life without second thought, which Art depicts perfectly in this meme. The meme refers to a bone-chilling scene in Terrifier, where Art cuts through one of his victims with a chainsaw, slicing through her entire body. Now if that isn’t cutting someone out, then we don’t know what is.

Picture this: You’re out with friends at a bar when a mysterious person walks up to you and expresses that their friend has taken an interest in you. With a beaming smile, you turn to look at their friend that they’ve pointed out from across the bar, when suddenly all of your excitement slips through the cracks of a proverbial window. Their friend doesn’t look exactly as you imagined, and on top of that, they’re actually starting to creep you out with their unsettling smile. The situation itself is bad enough, and Art the Clown’s off-putting smile is the perfect example for the shiver that runs down your spine.

10. The smile gets them every time

Everybody wants someone with a perfect smile. A glistening smile is what lures an opposite mate in, leaving them tongue-tied as they approach you and get lost in your eyes — all while your smile keeps them intrigued. And while Art the Clown’s smile is definitely not intriguing, it makes sense that some people are just naturally attracted to a widened grin, with an assortment of pearly whites on perfect display. Still, if ever someone is smiling at you with a vengeance in their eyes like Art, then it’s probably best to turn the other cheek and get to stepping somewhere else. Just some food for thought — especially over Halloween weekend at the local bars.