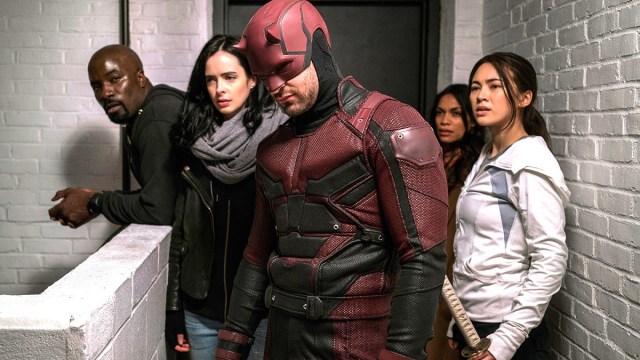 via Marvel Television
Review of:

One thing that continues to nag Marvel Cinematic Universe fans is whether or not the Defenders Saga takes place in the MCU proper. On the one hand, the shows make reference to “The Battle of New York,” seemingly making a nod to 2012’s The Avengers. But on the other hand, the world seen in series like Daredevil and Punisher seem so different than the MCU. Is there a way to reconcile the two universes?

From 2015-2019, Netflix released a series of interconnected Marvel shows: Daredevil, Jessica Jones, Luke Cage, Iron First, The Punisher, and The Defenders. In 2022, those shows all migrated to the House Mouse’s streaming service Disney Plus and were branded as the Defenders Saga. On the surface, it seems like that would make the Defenders Saga MCU shows, but there are some tonal and plot inconsistencies that raise questions.

In all of the Defenders Saga shows, the mainline MCU timeline is only vaguely referenced by way of “The Battle of New York,” the Chitauri invasion that happens in the events of 2012’s The Avengers. But other world cataclysmic events — like the rise of James Spaders’ Ultron in Avengers: Age of Ultron and the invasion of Josh Brolin’s Thanos in Avengers: Infinity War — weren’t even mentioned once, despite often concurrently occurring in the timeline of the shows. Is there a way to reconcile this?

In The Avengers, Robert Downey Jr.’s Tony Stark briefly goes through a wormhole above New York City to defeat the Chitauris by hurling a nuclear missile at their mothership on the other side of the universe. He finds himself on the other side of the universe briefly and then comes back through that same portal back to his home. But what if Tony actually returned to a different universe? Because, you know, wormholes can do crazy things like transport you to a parallel dimension.

This different universe that Tony enters happens to be very similar to his own, so he doesn’t notice that it is not the same one he was born in. The storyline in this different universe then continues, with the events of every MCU movie after The Avengers occurring in it with Tony in it. Meanwhile, in the original universe where Tony was from, his absence causes the Avengers to fall apart. Because there are no Avengers anymore, global cataclysms stop occurring on earth.

As Paul Bettany’s Vision says in Captain America: Civil War, “Our very strength invites challenge.” If the Avengers fell apart, there would be no challenge from a malevolent force to come and try to match it. Therefore, the street-level stakes of the Defenders Saga unfolds in the absence of world-destroying threats.

If this theory were true, the characters in the Defenders Saga don’t mention Ultron or Thanos because those supervillains never appeared in their universe.

The Defenders Saga existing in a separate universe from present-day MCU could also explain why the rebooted versions of Charlie Cox’s Daredevil and Vincent D’Onofrio’s Kingpin feel so different in the MCU. Due to the butterfly effect, Tony Stark being present in their universe drastically changed the nature of Matt Murdock’s and Wilson Fisk’s characters, even down to the way they dress. That’s why Kingpin rocks a Hawaiin shirt in the Disney Plus MCU series Hawkeye, rather than a black button-up like in the Netflix show; and perhaps that’s also why Daredevil has a yellow-and-red outfit for his appearance in She-Hulk, rather than the traditional solid red.

But hang on, if the original Tony Stark assumed his role in a different universe, what happened to that universe’s Tony that he replaced? Wouldn’t there be two Tonys in the same universe at some point? The answer is simple: The different universe Tony got stranded on the other side of the universe where he died in the vastness of space amongst the debris of the exploded Chitauri ship. This could imply that the nightmare Tony has in Iron Man 3 was actually a glimpse into the consciousness of the duplicate Tony who was stranded in space in the throes of his final breath since we learned in Doctor Strange in the Multiverse of Madness that dreams are instances of experiencing alternative-universe versions of yourself.