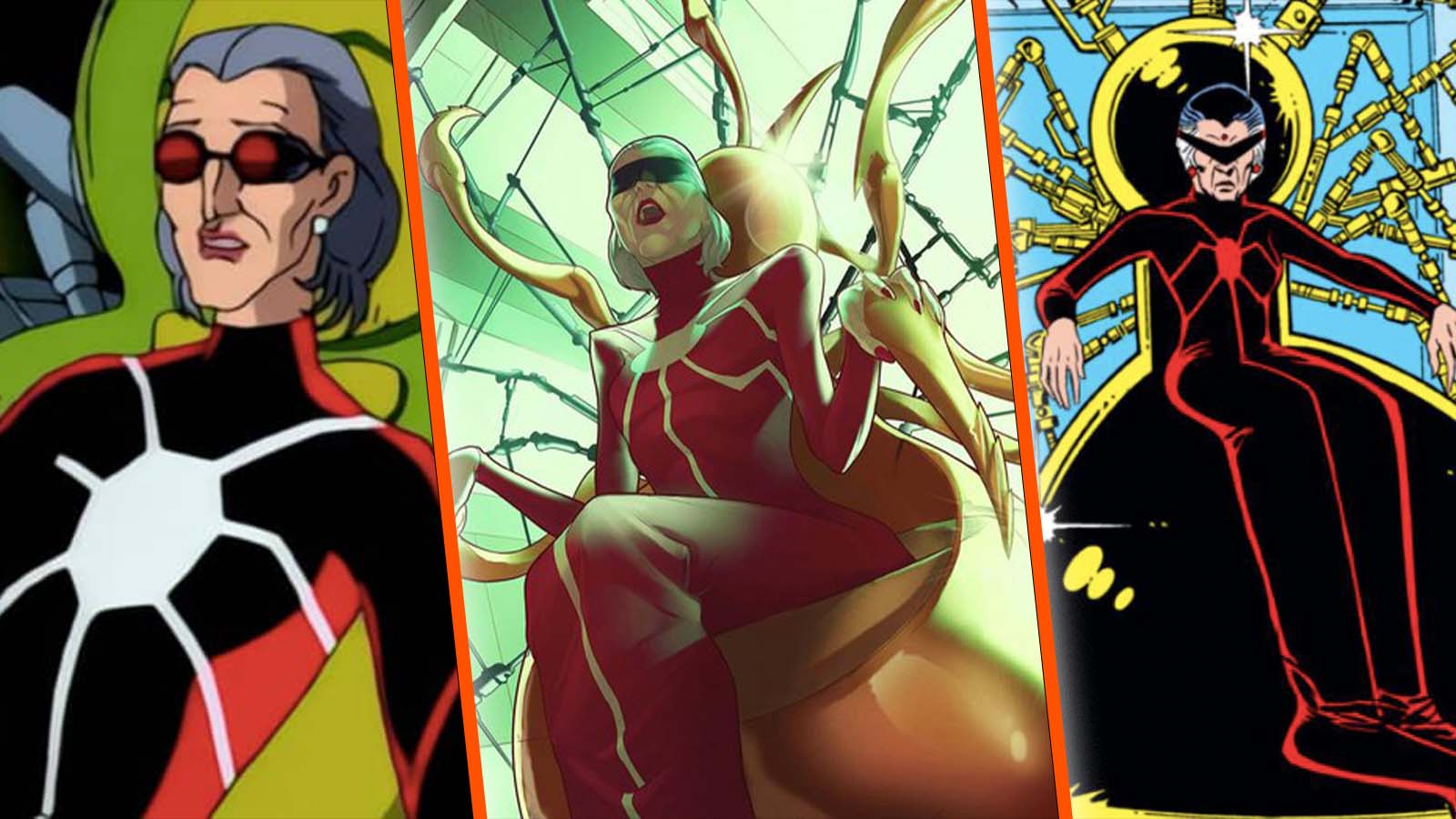 Madame Web will soon be joining the MCU in her own solo movie, making it the perfect time to get acquainted with the Spider-Verse’s resident oracle with some of her best storylines straight from the comics.

Who is Madame Web? Children of the 1990s will know the name from Spider-Man: The Animated Series, the show where Spider-Man wasn’t allowed to punch anyone or scare birds. The blind, elderly psychic at the center of the Spider-Verse, Madame Web used her powers to guide Peter Parker as he kept the fabric of reality from splintering. No pressure.

At first glance, you might think there’s not much to say about Madame Web, but there’s actually much lurking beneath the surface. Did you know that she’s died twice? Or that there have been two different characters to use the Madame Web moniker? In fact, it’s the second iteration that has the biggest movie appeal.

Let’s take a look at eight comic stories that delve deeper into one of Marvel’s most under-appreciated figures.

Debuting in 1980, the psychic centerpiece of the Spider-Verse was first seen in the pages of Amazing Spider-Man #210. When readers first meet Cassandra Webb, she’s working as a psychic “teacher” in New York City under the name Madame Web. Peter Parker scoffs at the idea, dismissing her as a fraud. Later, a series of events leads Spider-Man to her apartment. There, he sees Madame Web connected to the vast network of machinery that keeps her alive. She explains that she is clairvoyant and that she can nurture the ability in those who share her gift. Madame Web then uses her psychic powers to help Spider-Man find a woman in danger, thus proving her claims. Just to show off, she calls Peter at his home and predicts his future.

The next time readers came across Madame Web was in Amazing Spider-Man #216. After discovering that a murder plot is afoot, Spider-Man contacts Web for help. The problem is that her psychic aura is fuzzy that day, so she can’t see what’s going to happen or who the players will be. As Spider-Man continues to uncover the plot, a random payphone starts to ring. Coming in with the last-minute save, it’s Madame Web, who suddenly knows exactly where the hero needs to be in order to thwart the assassination attempt.

Here we have a classic Spider-Man battle with Juggernaut, and Madame Web is at the center of it all. Amazing Spider-Man #229 pitted Spidey against the X-Men villain. (Go ahead and hum the Juggernaut song from Deadpool 2. “You can’t sto-op him. You can’t sto-op this…”) To bring the two together, Black Tom Cassidy wants Madame Web to help him defeat the X-Men, so he sends Juggernaut to retrieve her. Just like the song says, Spider-Man is unable to stop Cain Marko as he lumbers across NYC. He arrives at Madame Web’s apartment and takes her from the chair that sustains her life. Seeing a helpless, elderly woman dying hits a soft spot in Juggernaut and he abandons his kidnapping mission. Spider-Man wants revenge and chases Cain Marko across the city, eventually trapping him in freshly-poured cement.

Madame Web took a dark turn in Spider-Man #96. The story focuses on the pain of her existence. Without her life-support chair, she would have died long ago. Instead, her feeble body is forced to live on, forever bound to the machinery and her precognitive abilities. She then has a vision of Norman Osborn, who promises to restore her youth if she joins his newest villainous team, the Five. Madame Web contacts Spider-Man for help, though we get the feeling that something sinister is in the works. Web predicts that J. Jonah Jameson is going to kill Osborn, and Spider-Man rushes to save the day. Indeed, Jameson does pull a gun on Osborn, but Norman disarms him. When it looks like J.J. is about to meet his maker, Spider-Man saves the day, and that appears to be exactly what Osborn wanted. By the end of the issue, Madame Web agrees to join the Five and has a vision of horrible things to come.

This issue could very well be tied to the upcoming Madame Web movie. The latest news proclaims that Sydney Sweeney has joined the Madame Web cast. Just to drive fans and theorists crazy, Sony has not revealed her role. Many have speculated that she will play Felicia Hardy, aka Black Cat, who was teased in Morbius by way of a Daily Bugle Easter egg. However, there is a prominent theory that Sweeney could play Charlotte Witter.

Debuting in the pages of 1999’s ASM #5, Witter is Cassandra Web’s granddaughter. Charlotte would go on to become the fourth Spider-Woman. The problem is that Madame Web’s star, Dakota Johnson, is clearly not going to portray a convincing grandmother. For that matter, it wouldn’t make sense for Johnson and Sweeney to be mother-daughter, either. Still, the movie exists in the multiverse, and time travel is always a plot-convenient option.

It’s very likely that this issue will have implications for Sony’s live-action Spider-Verse. We know that Sony is looking to tie its Marvel characters together in a shared universe. We also know a Kraven the Hunter feature film is in development and Sony is casting the entire Kravinoff family. In ASM #637, both of those worlds come crashing together. The original Kraven, Sergei Kravinoff, died at the conclusion of the 1987 masterpiece, “Kraven’s Last Hunt.”

Decades later, Kravinoff’s family seeks revenge by hunting Spider-Man and his amazing Spider-friends. It leads to ASM #637, where Kraven’s widow, Sasha, who calls herself Grim Hunter, assembles the entire Kravinoff family, including Kraven’s half-brother, the Chameleon. In a full-blown horror story, the Kravens kidnap Madame Web and make human sacrifices out of lower-ranking Spider-Verse characters to resurrect Sergei. By the end of the issue, Madame Web is murdered and passes the title to the former Spider-Girl, Julia Carpenter.

In one of the more forgotten tales of Amazing Spider-Man, Peter Parker steps through a portal and discovers an apocalyptic wasteland. This isn’t some random world alternate universe, either. It’s a future version of New York City. The idea is that the portal skips ahead 24 hours in time. When Peter opened the door, it transported him one day forward, which means Spider-Man went missing from NYC for an entire day, and the world collapsed. It puts a whole new spin on “with great power comes great responsibility.”

Where things get interesting is Julia Carpenter, aka the second Madame Web. We learn that, despite being able to see the future, she does not have the power to change it, even if it means leaving innocent people in harm’s way. “Everyone has their part to play,” she tells Spider-Man, and that includes her own daughter despite the threat of total annihilation. The story puts a spotlight on the curse of Madame Web’s clairvoyance.

Does anyone really die in a comic? Sort of. In this case, Cassandra Webb makes a brief but poignant return as a clone, a plot device Spider-Man comics are famous for using. Still, Cassandra’s last appearance is surprisingly profound and heartbreaking. The story to this point has been that the deceased villain, the Prowler, was resurrected as a clone. Only this time around, he is fighting on the side of good. At least, he thinks he is. The same mysterious corporation that brought him back to life, New U, has cloned other characters as well. To sustain their lives, the clones must take a pill each day, which New U uses to hold the clones hostage.

Julia Carpenter begins investigating the nefarious laboratory, and she infiltrates their headquarters. There, she meets the original Madame Web, Cassandra, who is once again bound to her life-sustaining chair. Only, it’s not actually Cassandra, but a clone, and she is dying. Julia offers to give her the pills, but Cassandra chooses to end her pitiful existence. “I have seen the future, and it is one I would prefer not to live through,” she says before passing a second time.

Will any of these storylines be incorporated into Marvel’s upcoming Madame Web film? Only time will tell. Until then, dive into these comics to learn more about the refreshing new addition to the MCU roster before she crawls her way across the silver screen.