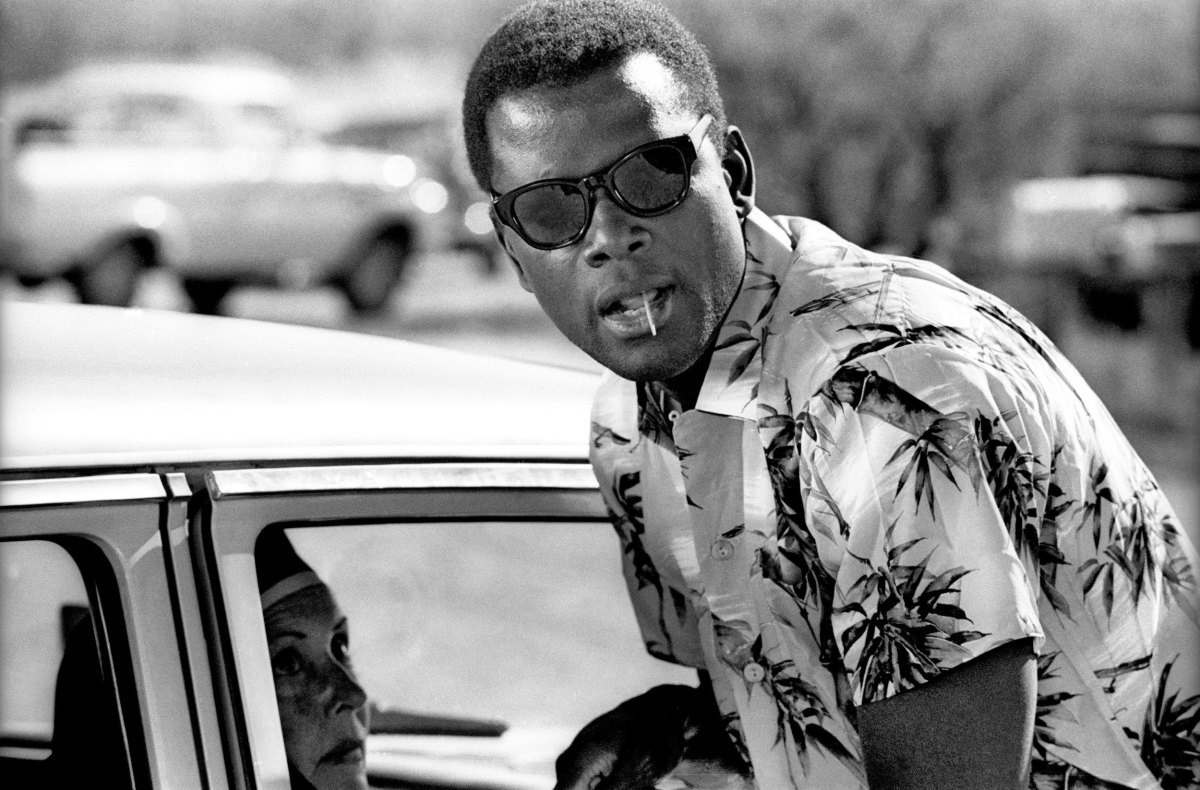 Hollywood is mourning one of its greatest artists of all time, Sidney Poitier, who passed away yesterday at the age of 94. Poitier’s career was one of the most groundbreaking of all time as he trailblazed across the racial lines of the industry with his work as an actor, director, and producer, becoming the first male person of color ever to receive the Academy Award.

Here are ten of the pioneering artist’s greatest, not to be missed films.

Poitier’s breakout role was as Gregory Miller in the Glenn Ford vehicle Blackboard Jungle in 1955. As a student in an interracial inner-city school, Poitier is the unspoken leader of a group of anti-social toughs but is encouraged by Ford to embrace his natural leadership abilities. Although the film was controversial in many ways, notably for its depictions of juvenile delinquency and its use of Rock and Roll music for its soundtrack, Poitier became the subject of critical praise, and the role ended up putting him on the map.

The Defiant Ones was one of Poitier’s first starring roles. The film was radical for its time, taking a head-on look at issues of race like few films of the time had dared to do. Poitier stars alongside Tony Curtis as a pair of escaped convicts from a Deep South chain gang. As the two seek freedom, they are forced to confront their prejudices and notions, especially Curtis’s unapologetically racist character, Joker. The Variety review stated that “Poitier captures all of the moody violence of the convict, serving time because he assaulted a white man who had insulted him. It is a cunning, totally intelligent portrayal that rings powerfully true.”

A Raisin in the Sun follows the Younger family struggling to break into a middle-class existence. The death of the family patriarch has put a sizable insurance settlement in their hands, but the family is divided as to how best to spend it. When they attempt to buy a house, the family runs up against red-lining practices that threaten their dreams. The movie was one of the first to introduce white audiences to non-stereotyped details of Black family life. It earned Poitier a Golden Globe nomination.

Lilies of the Field, a heartwarming comedic drama, was lighter fare for Poitier and one of the first to make good use of the actor’s occasionally overlooked comedic prowess. Poitier stars as Homer Smith, an itinerant handyman who finds himself helping a group of recently immigrated German and Eastern European nuns. When Smith asks to be paid for the initial work, he is told they cannot pay and asked to consider the titular flowers in lieu of payment. As Smith stays and continues his work, the sister comes to think that God sends him to aid them. Most notable about the film is that it earned Poitier the Academy Award, the first Oscar ever awarded to a black man. Sadly it would be decades before another black man received the award.

A Patch of Blue is an intimate portrayal of the friendship between an 18-year-old, illiterate, blind girl, portrayed by Elizabeth Hartman, and Poitier’s Gordon Ralfe, an educated black man. Their relationship puts them at odds with the girl’s sadistic and bigoted mother, played by Shelly Winters. The movie broke new ground for Poitier as he collaborated on the screenplay with writer-director Guy Greene.

To Sir With Love mirrored Poitier’s earlier work in Blackboard Jungle, but this time he was the man standing before the blackboard in front of a roomful of mostly white students. The story is set in London, at the very height of the swinging sixties era, making Poitier’s character even more of a fish out of water. With its Carnaby Street fashions and Mod trappings, the film was a hit with audiences and a massive payout for Poitier, who had agreed to appear for only a small fee but for an additional 10 percent of the gross. The movie ended up grossing $42,432,803 at the box office. Though some accused the movie of gross sentimentality, the Time magazine review praised Poitier saying, “Even the weak moments are saved by Poitier, who invests his role with a subtle warmth.”

Poitier’s second release of 1967 had absolutely nothing in common with the feel-good sentimentality of To Sir. In the Heat of the Night delves headfirst into the deep-seated racism of the American South. Poitier stars as Virgil Tibbs, a respected Philadelphia police detective. When Tibbs finds himself unavoidably involved in a small-town murder in Mississippi, he is forced to work alongside the area’s prejudiced Police Chief, Bill Gillespie, played by Rod Steiger. The film is critically acclaimed and also noted for the scene where, when slapped by a wealthy white man, Poitier slaps him back in kind. The film was also the first major Hollywood movie lit with proper consideration of his skin tone.

Poitier’s final ’67 release was groundbreaking for the time for its portrayal of an interracial relationship. Guess Who’s Coming to Dinner follows newly affianced couple Dr. John Prentice and Christina Drayton as they meet each other’s respective parents over the course of one whirlwind night before John returns to his practice in Africa. The film not only addresses overt racism but also prejudices held by each family member, even those of Christina’s supposedly liberal-minded parents. In a 2003 interview with Larry King, Katherine Houghton, who played Christina, would state, “Anybody who’s ever been involved in an interracial marriage of any sort, or even a gay relationship, any kind of relationship that’s not approved of, that movie became a metaphor for those kinds of situations.” However, Houghton also stated, “I don’t think it did a thing for civil rights. … It was a movie for white people.”

Poitier had two directorial efforts under his belt by the time he helmed 1974’s Uptown Saturday Night. The comedy-action crime film was almost a bit of a pushback against the Blaxploitation genre popular at the time, with the hapless lead character, portrayed by Poitier himself and Bill Cosby, getting into a series of misadventures to retrieve a stolen lottery ticket. Poitier’s Steve Jackson holds himself with a poise and sophistication that runs counter to the slickness of superstar pimp characters of the time, such as The Mack’s Goldie or the titular hero of Superfly.

Poitier’s 1980 directorial effort Stir Crazy may have garnered some mixed reviews, but the movie was a runaway hit at the box office that year, earning $101 million. Building upon the incredible chemistry between stars Gene Wilder and Richard Pryor in 1976’s Silver Streak, Stir Crazy featured the pair as two unemployed artists who find themselves wrongfully convicted of bank robbery and sentenced to spend a ridiculously long sentence in a maximum-security penitentiary. The box office take was the first time a black man had directed a movie that grossed over $100 million.