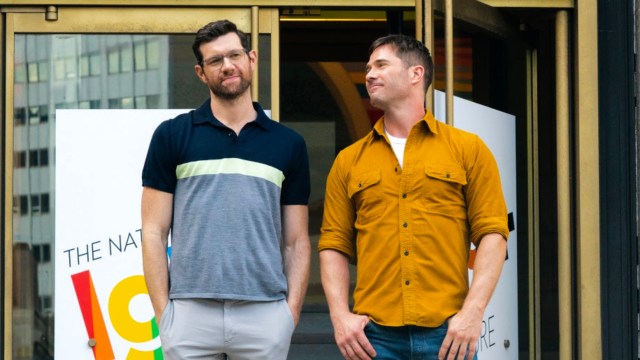 Easily one of the most anticipated films this year, Bros will finally be hitting screens on Sept. 30. The romantic comedy, written, executive produced, and starring Billy Eichner has gained significant buzz in the past year, and is noted for being the first comedy from a major studio with a main cast of solely LGBTQ actors.

Bros is directed and co-written by Nicholas Stoller, and stars an ensemble cast of talented actors. The rom-com follows Eichner’s character Bobby Lieber, who’s a museum curator with commitment issues, and his love story with a lawyer, played by Luke Macfarlane.

There is a host of familiar faces, as well as some lesser known actors in this film. Here’s the cast of Bros, and where you’ve probably seen them before.

Heading the cast is the lovable comedian Billy Eichner. Most notable for his hilarious game show Billy on the Street, which earned him a Daytime Emmy nomination, Eichner has been making people laugh out loud for quite some time. He gained further recognition for starring as the passionate Craig Middlebrooks in the sixth and seventh season of Parks and Recreation. As a voice actor, he voiced Mr. Ambrose in Bob’s Burgers, and Timon in the Lion King remake, and he will reprise the latter role in the upcoming prequel Mufasa: The Lion King.

Luke Macfarlane shot to fame as the charming Scotty Wandell in the popular family drama Brothers & Sisters. The actor has had several lead, supporting, and guest roles in many famous series over the years. As a lead actor, he starred in Satisfaction, the space adventure Killjoys, and Mercy Street. He gained a new set of fans for his swoon-worthy performance in the Netflix Christmas rom-com, Single All the Way. He’s set to join Rose Byrne and Seth Rogen in the upcoming Apple TV Plus comedy, Platonic.

The fabulous force that is Ts Madison has pretty much done it all and is a successful actress, television personality, and musician. She has been vocal for trans rights and is the first Black trans woman to star and executive produce her own reality show, The Ts Madison Experience.

Fans may recognize Monica Raymund from her lead role in the Fox drama Lie to Me as the brilliant Ria Torres. After the series conclusion, she joined the legal drama The Good Wife in a recurring role as Dana Lodge, before joining the main cast of Chicago Fire as Gabriela Dawson, and staying on for the first six seasons. She currently stars in the Starz drama Hightown, and Bros will be her first major film role.

Guillermo Díaz has had a long on-screen career, having shot to fame in the 90s for roles in Stonewall and Half Baked. His most recognizable role to date is his supporting role as Huck Muñoz in the political drama Scandal, led by Kerry Washington and created by Shonda Rhimes.

The hilarious Guy Branum is best known for being a recurring panelist on the E! talk show Chelsea Lately starring Chelsea Handler. He is a successful writer, standup comedian, and podcaster. Branum also wrote for Xplay, the G4 comedy series.

While she’s not been a prominent figure onscreen, Amanda Bearse rose to fame in 1985 with the horror film Fright Night. She became a household name two years later, starring as Marcy D’Arcy for all 11 seasons of the popular sitcom Married… with Children.

Jim Rash has made so many appearances in numerous television shows that it’s hard to pin him down to a particular appearance. While he’s ultimately most known for his role as Dean Craig Pelton on the NBC sitcom Community, he has had recurring and guest roles in: That ‘70s Show, Reno 911!, Glee, Black-ish, Brooklyn Nine-Nine, and more. Rash is also an Academy Award winner, taking home the award for Best Adapted Screenplay for co-writing The Descendants.

Earlier this year, Bowen Yang played the lead role in the romantic comedy Fire Island, which means he will appear in two of the four LGBTQ rom-coms released by a major studio. Yang is a comedian, podcaster, and writer, who made history in 2021 after his Emmy nomination in the Supporting Actor category for Saturday Night Live. He is the first featured player to earn the nod and was also a writer on the sketch comedy show in 2018.

After 20 years as a celebrity fashion stylist, Miss Lawrence is quickly rising in the acting space. He became a fan-favorite as the witty, no-nonsense Miss Bruce on the Lee Daniels-produced musical drama Star. He also starred in the biopic, The United States vs. Billie Holiday.

The multiple Tony Award-winning Harvey Fierstein has decades of experience under his belt. His most famous theater performances include: writing and starring in Torch Song Trilogy, and playing Edna Turnblad in the acclaimed musical Hairspray. He earned an Emmy nomination for his role in Cheers, and has made cameos as himself in multiple projects, including Ellen, Smash, BoJack Horseman, Sesame Street, and Saturday Night Live.

After performing in smaller venues, Symone strutted onto the 13th season of RuPaul’s Drag Race and claimed many hearts, eventually winning the reality competition series.

Eve Lindley’s career has been off to a great start since breaking out in 2016 with her film debut in All We Had, and a recurring role on Mr. Robot. She starred alongside Jason Segel and Andre Benjamin in the AMC drama Dispatches from Elsewhere, earning critical acclaim for her performance.

Benito Skinner has won hundreds of thousands of dedicated fans on social media for his various skits and celebrity impressions. He had a guest role on the 2022 remake of Queer as Folk.

She may be a retired, record-breaking athlete, but Dot-Marie Jones has made a great name for herself as an actress. She is most famous for her emotionally gripping role as Coach Beiste in the musical drama Glee, for which she became a huge fan-favorite, and scored an Emmy nomination.