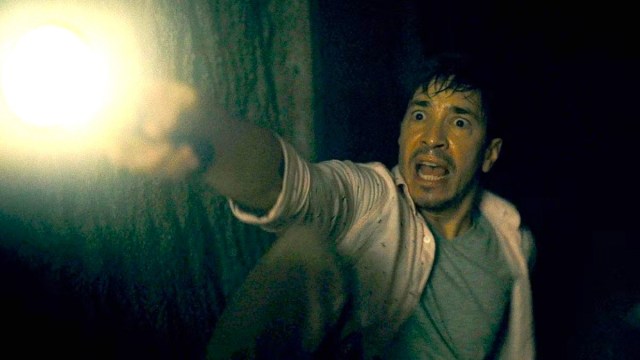 The horror genre has seen its fair share of peaks and valleys over the course of its history, but 2022 has undoubtedly been a absolute mountain range, from Jordan Peele’s Nope making for a third triumphant bow in just as many directorial efforts, to Ti West launching himself to new heights with X and Pearl, and A24 further capitalizing on such commotion with the likes of Bodies Bodies Bodies.

But it’s Zach Cregger’s solo directorial debut in Barbarian that can lay claim to the peaks of the peaks; with the film’s witty writing, masterful twists, and intriguing commentary on gender and the way it plays into dichotomies of domination, Cregger can pat himself on the back for years after this one.

Starring Georgina Campbell, Bill Skarsgård, and Justin Long, the film follows the fateful turmoil of three different visitors to an Airbnb, whose permanent resident has a horrifically twisted history.

Long in particular, who was recently appraised as the secret ingredient to a good horror movie, found himself in an anti-typecast situation in his portrayal of AJ Gilbride, a wealthy television star whose density is only slightly edged out by his status as a grade-A douchebag. In an interview with Movieweb, the actor recounted how he quickly fell in love with Cregger’s script.

“I had never read a script that seemed to break the rules of scriptwriting like that. I thought it was so bold and was written so naturally. The dialogue seemed to just flow. I was so engaged with it when I first read it, and that’s so rare, for me to get scripts like that, I think for any actor. And so just that alone, I remember being really struck by.”

He would go on to recall how this love only grew when he began to piece together what his contribution to the film would entail.

“I thought there had been a mistake, that he wanted me to play the rom-com guy who dies early on, and then Bill Skarsgard was going to play more of the character part. And I was so relieved to find, as I’m sure Bill was, to find that we were being asked to do things that neither of us seem to have as many opportunities to do. So it was a real blessing.”

Barbarian is now available to stream on HBO Max in the United States, and on Disney Plus as part of the streamer’s Star content hub in international territories.