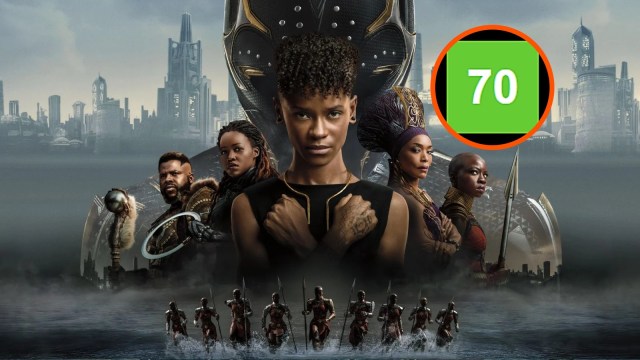 Black Panther: Wakanda Forever is generating a lot of hype from fans, especially considering its nose-bleedingly high Rotten Tomatoes score. But some are questioning whether the film will truly live up to its predecessor, in light of a more nuanced grade from the other major review aggregate site: Metacritic.

Wakanda Forever‘s Metacritic score compared to the first movie paints a picture of a movie sequel that doesn’t live up to the original, by a country mile. While both films were in the 90s on Rotten Tomatoes, there is a wider disparity over on Metacritic.

Since RT is based on a binary aggregation indicating the percentage of critics giving the film a passing grade, on a rough pass/no-pass basis, the more nuanced Metacritic score is closer to what we can consider a traditional letter grade. By this metric, 2018’s Black Panther has an 88/100 on Metacritic but Wakanda Forever only has a 70/100 on the same site. That would be a high “B” compared to a low “C,” respectively, if they were letter grades. This is due to Metacritic assigning each movie review a score out of 100, then averaging all of them together, rather than designating reviews as either “Rotten” or “Fresh,” like on Rotten Tomatoes.

Also of note, Black Panther is “certified fresh” on Rotten Tomatoes (96 percent) and a “Metacritic must-see,” but the same honors have not been bestowed on Wakanda Forever (91 percent on RT). It’s still early days for Wakanda Forever, however, so those certifications of approval could still be added later. And it’s also worth clarifying more reviews will likely come out for Wakanda Forever as time goes on, so its RT and Metacritic scores could go up or down depending on the reception.

Another commentator said the Metacritic score was “Actually higher than expected.”

But that did not stop one Twitter user from pointing out the significant dip in the score compared to the first movie.

It was a debatable point amongst a couple of other movie fanatics whether Wakanda Forever‘s 70-something Metacritic score was a bellwether for the Marvel Cinematic Universe’s downfall or simply par for the course at this point.

We’re still pumped for Black Panther: Wakanda Forever, and we’re excited to secure our own tickets for the film’s release on Nov. 11, but this whole Rotten Tomatoes/Metacritic debate is an interesting one to consider nonetheless when it comes to cinema’s modern superhero franchises.

You can read our four-star review of the movie here.