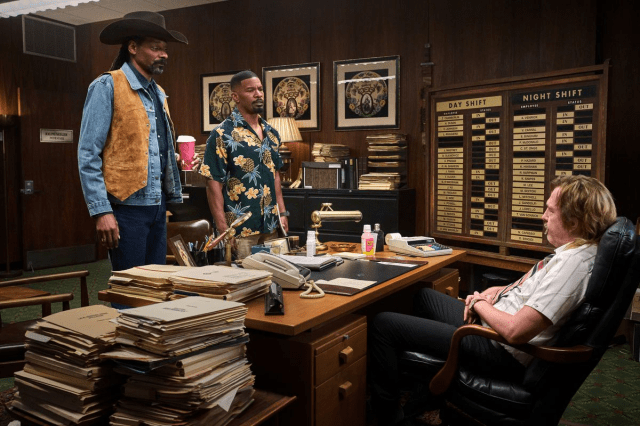 You don’t make a movie like Day Shift, a vampire-killing action flick rife with actors known for their comedic turns, and then say it was anything but a fun process. The film may not be gunning for any Oscars, but for a movie that puts Jamie Foxx on one end of a shotgun and a vampire with mad yoga skills on the other, it accomplishes exactly what it sounds like it wanted to.

And now we audiences get a sneak peek at all the tomfoolery that went on behind this gory amusement park of a flick, with a brand new Day Shift blooper reel having been posted to Twitter earlier today.

The modest minute-and-a-half featurette has all you’d expect; vampires breaking into dance, Jamie Foxx quips that caught everyone off guard, and Dave Franco fumbling on a stunt, followed by brisk profanity. But, much like the film itself, it’s Snoop Dogg that makes this blooper reel shine, responding to the outtakes and interruptions in a relaxed, matter-of-fact manner that makes such moments hilarious in a distinctly admirable way.

Day Shift is the latest film to jump onto 2022’s mild vampire craze, starring Jamie Foxx as vampire hunter Bud Jablonski, who’s looking to nab a big enough score to pay for his daughter’s schooling, lest his estranged wife move across the country with her. When he angers a particularly powerful vampire after killing her daughter, the stakes climb higher than ever and, hopefully for Bud, straight into his opponents’ hearts.

Day Shift is available to stream on Netflix.