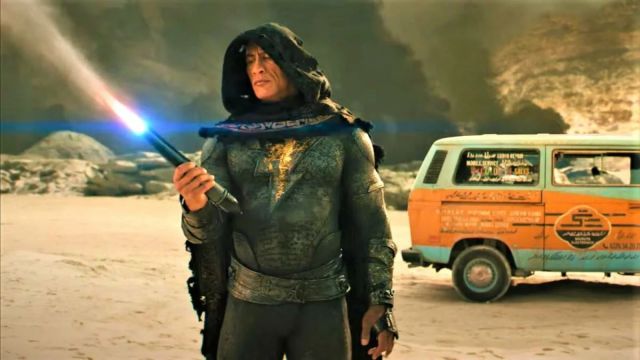 The newest film in the DC Extended Universe is finally here with the release of Dwayne “The Rock” Johnson’s Black Adam. The film was directed by Jaume Collet-Serra and serves as the introduction to Shazam’s main enemy, who is also an anti-hero, Black Adam. Dwayne Johnson’s first outing as the anti-hero has been mixed, not landing with critics with the Rotten Tomatoes score currently sitting at 43% at the time of writing. But audiences seem to be eating the movie up with the audience percentage at 88%.

One of the reasons the film might be performing poorly critically is that they seem to throw away a major plot point uncovered near the beginning of the film regarding Eternium, a new mineral. Let’s dive into Eternium, its comic book origins, and how it affected the plot of Black Adam.

How was Eternium used in Black Adam?

Eternium is one of the first things introduced in Black Adam. Black Adam’s origin story is tied to Kahndaq in 2600 BC where he was the father of the original champion. The reason for Kahndaq having a need for a champion is because the evil king Anh-Kot forced the people to work as slaves to harvest Eternium so that he could create the Crown of Sabbac, a Crown that would grant the wearer power harvested from demons. Once an old man finds a piece of the mineral, he asks the guards for the reward he was promised, and they throw him off a cliff for it. The Eternium was turned into the Crown of Sabbac after Black Adam’s son tried to steal it, and in the modern day the forces of Intergang — the mercenary forces stealing from Kahndaq and oppressing its citizens — have stolen the Eternium and weaponized it.

But the real plot point comes after Black Adam is released from his prison as it is revealed that while guns and rockets cannot harm him, Eternium can. However, that particular plot point is not brought up until the end of the film where they use an Eternium force field. Not that it impacts the plot very much. It felt weird for the movie to introduce something that can kill the powerful being everybody is trying to defeat, and then not use it to do exactly that over the course of the film.

Even though they did not address it, it is still worth bringing up what the rock is, and why it can harm Black Adam. In the comic books, Eternium was a result of the Rock of Eternity’s destruction. It is used the same way Kryptonite is used with Superman and Eternium gets rid of the powers of Shazam and Black Adam, as well as any other heroes blessed by the wizards. If they go near it their powers dissipate and if they are used as weapons it does indeed harm them.

Although in Black Adam his powers did not lessen when he was near Eternium like Superman would with Kryptonite, it still hurt him, and again it was not brought up later. Instead, the third act hinged on Black Adam turning himself in, by reverting to his human form and then breaking out again. They may have not wanted to lean too heavily on the fact that the Eternium could hurt Black Adam because it might have drawn comparisons to Superman which DC might not have wanted. You could definitely see a world where the Eternium did weigh heavily into the third act, and if it did the Superman comparisons would have been endless. However, it might have been better than the third act we did get.

The Eternium is actually used in an interesting way, regardless of its use in the plot, as Intergang infused hoverbikes with them. This allowed the bikes to shift their particles and go through obstacles, which was quite a compelling design and used in cool ways throughout Black Adam. Other than that, they infused it into their guns to give them an extra kick, and as previously stated one of these weapons gave Black Adam a cut near the beginning of the film, forcing him to recuperate.

Even though the film definitely has problems, it is still fairly fun and Dwayne Johnson manages to play a good anti-hero. It also contains a few hidden gems — some more obvious than others — for hardcore DC fans, so catch Black Adam while it is in theaters now.