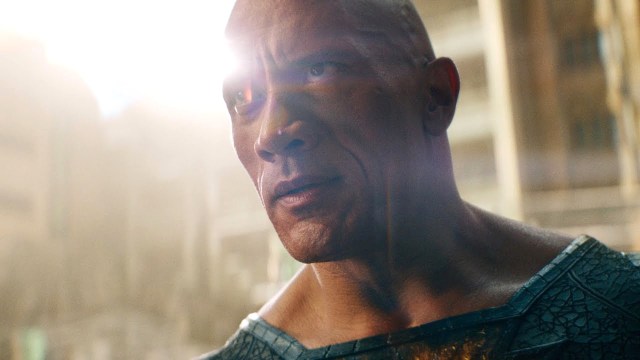 Image via Warner Bros.
Review of: Review: 'Black Adam' doesn't so much soar as gently levitate, but there's still fun to be had

'Black Adam' is nowhere near the game-changing revolution for the DCEU that was promised, but it's a solid introduction for Dwayne Johnson's antihero nonetheless.

There arguably isn’t a single more risk-averse star in Hollywood than Dwayne Johnson, who almost exclusively dabbles in the realm of $100+ million blockbusters where he only plays extensions of himself. Black Adam may tick a couple of the boxes we’ve come to expect from The Rock’s filmography, but the latest chapter in the DCEU’s greatest strength is that its leading man fully embraces the rare opportunity to deliberately play against type.

Having spent 15 years trying to get the movie made, there’s no doubting Johnson’s commitment to the cause. However, all that talk in the buildup of “changing the hierarchy of power” began to wear a little thin. Black Adam isn’t the game-changer we’d been conditioned to expect, but nor is it an outright failure, either.

It exists somewhere in the middle as a relatively safe and formulaic superhero story that runs through an extensive list of the genre’s cliches, but is elevated significantly by a thumping soundtrack, some interesting world-building, and a star seamlessly slipping into the skintight costume they were born to wear.

Things don’t get off to a particularly encouraging start, though, with an exposition-heavy prologue set in ancient Kahndaq establishing some heavy-handed backstory and motivations for the titular antihero, replete with the introduction of the Eternium MacGuffin – a magical element with properties that are every bit as mystical as they are destructive.

Kicking off a $200 million comic book adaptation with a lengthy flashback that spends a very long time setting the stage is always a risky gambit, and some may lose interest in amongst all this talk of Eternium, champions, the Council of Wizards, the Crown of Sabbac, and the rest of the table-setting required to introduce a brand new marquee hero to the masses, but the pace thankfully picks up when the action shifts to the present day.

Once Sarah Shahi’s Adrianna and her cohorts (complete with an accomplice that’s so blatantly a bad guy wasting second act screentime on the reveal is a waste of everyone’s time) visit an ancient tomb and awaken the legendary Teth-Adam, we’re off to the races in spectacularly violent fashion. You can understand why Black Adam was initially given an R-rating by the MPAA, because for once a superhero spectacular lives up to the hype that it pushed PG-13 to the very limit.

In his very first action sequence, Johnson delivers on his promise that Adam isn’t here to f*ck around, as he decimates an entire unit of nefarious Intergang members by way of frying them from the inside out, ripping their limbs off, stuffing live grenades in their mouths, and throwing them as hard as he can through whatever surface is closest to hand. It’s one hell of an introduction, and sets things up nicely for a gnarlier and more envelope-pushing story of costumed crimefighting than we’ve become used to.

Naturally, a 5000 year-old demigod awakening from slumber catches the attention of Amanda Waller (a performance that’s literally and figuratively phoned in by Viola Davis), who tasks the Justice Society with stopping the all-powerful entity in his tracks. Again, it’s understandable that the pacing would be slowed to a crawl as the JSA need to have their backstories filled in for audiences to care about them, but the stop-start nature of Black Adam as a whole takes a little getting used to.

Aldis Hodge’s Hawkman is the stoic, dignified leader, with the actor bringing a steely gravitas to the role that isn’t there on the page given that the vast majority of his dialogue is ripped from “Superhero Screenplay 101”. Noah Centineo’s Atom Smasher and Quintessa Swindell’s Cyclone don’t fare as well, although you get the distinct impression they may have had plenty of scenes left on the cutting room floor.

That leaves us with Pierce Brosnan’s Doctor Fate, who is an utter delight. Every bit as charming and suave as ever, the veteran brings a scene-stealing mix of fatalism and dignity to an archetypal “wizened sage” turn, generating sparks with virtually everyone he encounters. The majority of the Kahndaq natives feel underdeveloped beyond their one-note generalizations, unfortunately, but there’s some interesting subtext involving Adrianna, her son (Bodhi Sabongui’s Amon), and the nation itself that occasionally bubbles to the surface – if not often enough.

She calls out the Justice Society for showing up in a country that’s been under forced occupation for three decades for the very first time solely because another metahuman has popped up on the radar. She’s 100 percent right, and the JSA are even willing to admit it, but any hint of a deeper exploration on what would be a fascinating narrative thread for an all-ages DCEU epic is swiftly jettisoned in favor of more punching and things going boom.

Director Jaume-Collet Serra throws plenty of neat visual tricks into the myriad of fast-paced and frantic showdowns, but Black Adam can never escape the fact that it’s not exactly the genre’s most original effort. A villain who’s the evil mirror version of the hero? Check. Daddy issues? Check, but not entirely how you might think. A protagonist slowly learning to evolve through the life lessons imparted on them by the rest of the key players? You betcha. In true DCEU fashion, there’s even a giant sky-beam and a poorly-rendered CGI villain during the climactic showdown for good measure.

There are plenty of shortcomings to be found in Black Adam, then, but Johnson is never one of them, with his underrated acting chops compensating for the deliberate reigning in of his boundless charisma. Teth finds killing as easy as breathing, and he doesn’t quite get why the JSA are so bemused by him making the world a safer place by turning dangerous people into dust. It may not be “the Dirty Harry of superhero movies” as we were told, but the amorality that powers the main attraction is an intriguing wrinkle in a medium where almost every major name is colored distinctly in black or white.

Black Adam doesn’t reinvent the wheel, nor does it even tear a single page out of the superhero playbook. Instead of being completely dismantled, the hierarchy of power has been slightly shifted, but that’s not exactly a bad thing. The DCEU needs an evolution as opposed to a revolution, and The Rock has introduced what might turn out to be the ideal candidate with which to lead the charge.

Review: 'Black Adam' doesn't so much soar as gently levitate, but there's still fun to be had

'Black Adam' is nowhere near the game-changing revolution for the DCEU that was promised, but it's a solid introduction for Dwayne Johnson's antihero nonetheless.