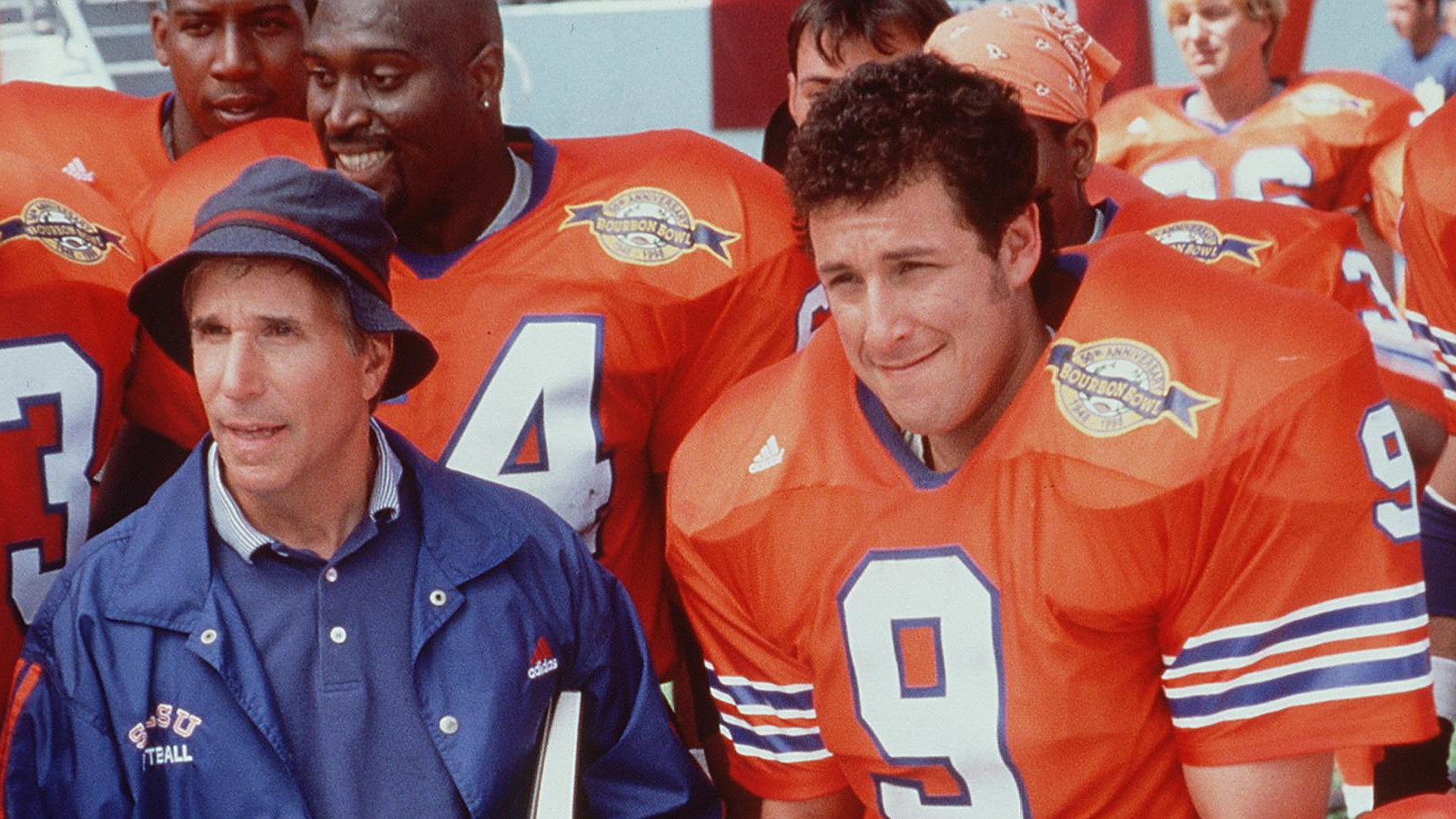 As Adam Sandler released another sports-themed movie with him at the helm, it reminds us of the others from his past.

As Hustle keeps netting high marks with audiences and the media, it follows on Sandler’s love affair with sports and his ability to find an underdog story that everyone can root for in the arena of sports, even if they’re not quite sports movies.

After he got the sports thing started with Happy Gilmore (in which he was a one-time hockey player who became a golfer), The Waterboy followed next in 1998, and is still in the upper ranks as one of the most quotable ‘90s (and Sandler) movies.

Just look at the other eight on this list — four are Fast & Furious franchise movies, two are cartoons in Cars and the sequel Cars 2, and then you have Forrest Gump, which we can’t fathom being in the “sports comedy” category. This leaves The Blind Side which, again, isn’t really a comedy even if it has some laughs.

Is it any wonder Sandler’s sports comedies largely work, and even stand as films audiences (especially fans of Sandler and/or sports) still hold in high regard?

The Waterboy takes a similar approach with some twists. It’s another down-on-his-luck character (like Happy Gilmore, albeit a totally different person) who finds meaning and friendship (and kinship) through sports. The Waterboy follows Sandler’s lead character as he goes from being a disregarded (and even discarded) waterboy who then by a twist of fate becomes a breakout college football player with a smorgasbord of hilarious costars by his side.

On the verge of its 25th anniversary next year, there’s a lot to look back on with who was involved (there were actually a lot of recognizable names).

Where are they now? Let’s look at what The Waterboy cast is doing now.

As you might have heard or had pop up on your Netflix browsing lists (you know they love to drop those repeat titles), Sandler has a new sports movie out called Hustle.

Not quite in the comedy vein as his previous sports enterprises — but one with more of a heart and adult real-world environment compared to the zany, fish-out-of-water experiences in Happy Gilmore and The Waterboy — Hustle shows that Sandler + sports is usually a formula that equals goodness on some level.

Sandler is slated to continue putting out new work, drama and comedy (and ridiculous) over the next few years as his partnership with Netflix continues.

There are even some sequels on the way that maybe nobody asked for, but the numbers must say otherwise, with Murder Mystery 2 in the works as one of them.

He’s already taken on hockey, golf, football, and now basketball. So, a baseball movie must in the works somewhere, yeah?

Probably the next star from the movie that’s remained in our current watching culture, Winkler is doing wonders as the former actor/acting teacher/actor once again costar of Barry.

The HBO Max series just wrapped up its third season in which Winkler puts forth an emotional performance that will engulf your senses and have you feeling his every pain and consideration right with him.

Spoiler for the Barry season three finale in the next two paragraphs!!!

The barely noticeable look of satisfaction he gives when Barry is arrested in the season three finale — all while still showing with only facial acting how incredibly somber and depressed he remains from the loss of the love of his life — is something that Winkler pulls off masterfully.

We love that Winkler went from heartthrob The Fonz on Happy Days to span such an extensive career and has allowed himself to be whatever and whoever he wants to be, not weighed down by such a historic character performance.

The wondrous and prolific Bates has continued to put in great work in a film almost every year like clockwork (sometimes a few in one year, other times a small gap) since The Waterboy.

From funny to panic-inducing, charming to crass, Bates has shown the full range and then some throughout her tremendous career.

Most recently she gained critical acclaim for her roles in American Horror Story: Apocalypse in 2018, and then The Highwaymen and Richard Jewell, which were both released in 2019.

She appeared in 2020’s Home, but has since not been on the big screen in the last couple of years (as is the case with plenty of talent during the COVID-19 pandemic).

Next year she will play Sylvia Simon, the grandmother to the titular character in 2023’s Are You There God? It’s Me, Margaret.

“Kathy Bates has given us so many memorable, iconic characters,” writer and director Kelly Fremon Craig told Deadline upon the announcement. “Whether it’s comedy or drama, she is perpetually captivating on-screen. I’m thrilled to employ her extraordinary talents on this film I care so much about.”

Following that, she is cast to take part in The Miracle Club, which is meant to be a British-Irish comedy costarring Maggie Smith and Laura Linney, but the film is without a release date as of yet.

Never afraid to poke fun at himself or go way over the top looking for laughs, we last saw Schneider in two other Sandler projects on Netflix — The Wrong Missy and Hubie Halloween.

And you know when Sandler asks Schneider a question about trying something, his longtime pal is gonna tell him he can do it! (OK, probably not, but that four-word phrase, “You can do it!” has sure lived on a longtime.)

Let’s just look at who Schneider played in Hubie Halloween, which got bigger numbers on Netflix than you’d expect.

Schneider plays Richie Hartman, as explained amazingly on Wikipedia he’s “Hubie’s childhood friend and a convict with severe bladder issues who escaped from a mental institution to get his roommate back there before he gets into trouble.”

That’s devotion to making any side or bit character come to life.

There’s certainly no shame being in the Sandlerverse as the Sandman is known to take great care of those around him, and to work as a collaborator more than a boss.

He was also on The Masked Singer just last year, and had a role in the 2022 sports comedy that also came from Happy Madison Productions (Sandler’s company) called Home Team, starring Kevin James (another member of the Sandlerverse).

The antagonist coach who doubts and pushes Bobby Boucher, Jerry Reed put on a great and believable performance as the coach of a football team in the south.

After several memorable performances throughout a long career, including in Gator and Smokey and the Bandit, The Waterboy was Reed’s final on-screen performance.

Many might not know that he was a noted musician as well, with several signature songs that appeared in several places (including “East Bound and Down” for Smokey and the Bandit).

The rebellious love interest for Boucher in the film, Balk has continued to make a mark on the screen.

Currently she’s part of the big ensemble cast of the TV series Paradise City on Amazon Prime that debuted in 2021 and has been renewed for a second season already. The musical drama is a spinoff of the 2017 movie American Satan.

After a run of films in the late ‘90s and early to mid 2000s, Balk stepped back from acting a bit but still showed up in roles throughout the time, including on TV in Ray Donovan.

A finer mumble jumble of speech in a comedy we haven’t heard since.

Clark has continued to show up in Happy Madison productions throughout the years after making a name for himself on television in the ‘90s — first with Home Improvement, then on Boy Meets World.

His last movie was also Hubie Halloween, and his voice is well known as Slinky Dog in two of the Toy Story movies.

A funny sidenote, the 1991 movie Shakes the Clown was Clark’s fifth movie role, while it was just the second for Sandler, which explains their connection going back so far.

More recently, he had a part in the series United States of AI on CBS, which ran for two seasons before being cancelled earlier this year.

Gilliard has bounced back and forth between film and TV throughout his career, with stints on The Walking Dead, The Deuce, and probably most notably, The Wire.

After a film role in 2014’s Walk of Shame, Gilliard was away from movies until the 2020 release of One Night in Miami.

He’s set to have a part in the upcoming movie Pep, a biographical take on boxer Willie Pep, which was (of course) pandemic-delayed by about two years and is scheduled to arrive sometime in 2023 now.

Another Sandlerverse member, Dante showed up more frequently in Happy Madison-based and related productions in the decade-plus following The Waterboy.

He landed two TV roles in 2017, Typical Rick, and 2019, Sugar and Toys, but most recently acted in the 2021 film The Pizza Joint, which, is definitely a marijuana play-on-words with THC goodness going straight into the pizza sauce.

He was also slated to be the lead in an upcoming movie called Road to Wherever that is in preproduction, but he’s run into some trouble with the law the last few years, including for not wearing a mask in an L.A. restaurant as reported by TMZ in January, so we’re not sure where that stands now.

The man with more flexible eyes than you or I, Loughran incredibly has at least 40 appearances in Sandlerverse projects.

If you wanna dive in to more on him check out our story from earlier this year.

The always noticeable brother of Ron Howard, Clint has an extensive career that continues on today, with several TV and movie roles in the last few years.

Another big part of the Happy Madison Sandlerverse, Covert was part of Murder Mystery, The Wrong Missy, Hubie Halloween, and Home Team.