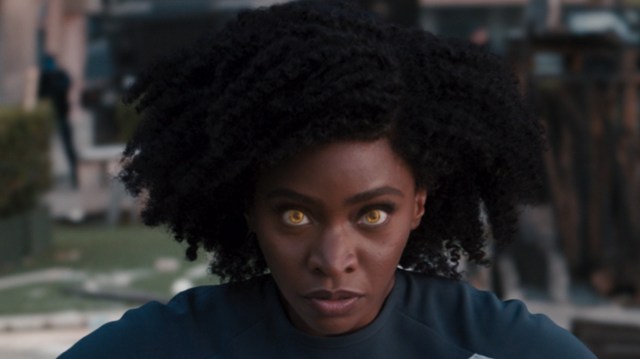 Monica Rambeau is the daughter of Carol Danvers’ old fellow pilot and friend, Maria Rambeau, and, years after meeting Captain Marvel as a child, Monica would follow in her mother’s footsteps to join S.W.O.R.D. This would end up putting her in contact with the Scarlet Witch, and subjecting her to the Hex, changing her DNA and granting her astounding abilities, and creating a new superhero. But, with her comic book character having had so many aliases, who will she be in the MCU?

Monica Rambeau was first introduced in the comics in The Amazing Spider-Man Annual #16, in October 1982. Her origin story, like many things that have transitioned from comic to screen, changed drastically for the MCU. In the comics, Monica gains her powers when she is hit by a wall of extradimensional energy produced by an energy disruptor weapon, very similar in fact to how on-screen Carol Danvers got her powers. The MCU’s Monica, meanwhile, gains her powers in WandaVision, when she goes through Wanda’s reality-bending Hex borders three times, permanently altering her DNA.

In the comics, Monica’s first superhero name was actually Captain Marvel, even though the alias had already been used by the late Kree hero Mar-Vell. She kept the moniker for some time, joining the Avengers and even leading them under it. She later changed it to Photon, then Pulsar, and finally Spectrum. With so many names for Marvel Studios to pick from which one will she go by in her next outing in The Marvels?

Due to the symbol used in the logo for The Marvels, many came to believe that she would be going by the name Spectrum, her most recent name in the comics. In spite of this, there is stronger evidence that she will likely to go by the name Photon. In an attempt to bridge the gap between Marvel Comics and Marvel Studios, Monica Rambeau will be getting her first solo comic titled Monica Rambeau: Photon. It will be a five-issue limited series and will arrive on Dec. 7 this year. It’s about time for a character who has led the Avengers in the past.

Another fact that may point towards her using Photon is that it was her mother’s call sign from when she was a pilot in Captain Marvel — Maria “Photon” Rambeau (think Top Gun nicknames, Pete “Maverick” Mitchell and Nick “Goose” Bradshaw). Because Carol Danvers’ energy blasts from her hands are called Photon blasts, people may confuse the name with having been adopted from Captain Marvel when in fact it is to honor her mother. This may be addressed when she meets Captain Marvel fanatic Kamala Khan in their upcoming project that brings the “Marvels” together.

It isn’t 100 percent certain yet which of these names she will go by, though, as argued above, Photon is looking most likely. Whether or not Marvel will let us in on this tidbit before The Marvels gets here or whether audiences will react to it just as other MCU characters will on-screen is also unsure.

Monica Rambeau will make her appearance, regardless of her name, in The Marvels — set to be released in theaters on July 28, 2023.