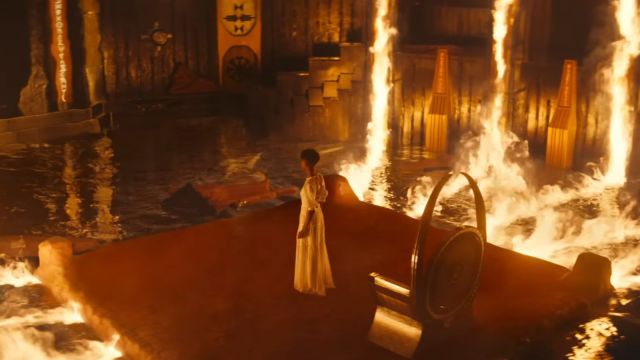 A familiar face appeared in Black Panther: Wakanda Forever when Shuri drank the juice from the heart-shaped herb she replicated. As per tradition, those who drink the herb must visit the ancestral plane to earn wisdom from their ancestors. For Shuri, as much as she wants to be reunited with her family once again, she’s welcomed by Killmonger.

For those who don’t remember, Killmonger was seen as an outsider, yet is related to the Wakandan royal family. He also drank the herb and received the powers of the Black Panther. Unlike T’Challa, whose ancestral plane was in the scenery of his country, his was in the scenery of his apartment in Oakland, California. And during his time there, he was reunited with his father, who was killed when he was young.

But perhaps the events of both Black Panther movies may provide answers as to why Shuri is faced with Killmonger.

Why does Shuri see Killmonger in the Ancestral Plain?

There were a few reasons why Shuri met Killmonger instead of her own family in the ancestral plane. The first is because her heart was filled with grief and vengeance because of the death of her mother, Queen Ramonda. Due to how she was feeling at the time, the closest person she’s got to obtain wisdom is Killmonger. Shuri was asked by Killmonger what she was going to do next after Namor and his army attacked Wakanda. Will she be honorable like her brother, or will she choose the path of vengeance?

There may be another reason why Shuri didn’t reunite with her family or former rulers of Wakanda during her time in the Ancestral plane. In the events of the first Black Panther film, T’Challa called out his fathers and former leaders for their mistakes, prioritizing Wakanda first over the outside world. In exchange, he was denied his place with his ancestors.

Shuri’s encounter with Killmonger is intentional since he’s the only one who truly understands what she’s facing. Not only did she lose her mother at a young age, just like Killmonger with his father, but he too knows what it’s like to have vengeance in your heart. All the other leaders of Wakanda probably have nothing to give to Shuri. And perhaps T’Challa’s defiance in the first film led to him not being able to reunite with his sister.

Killmonger may not be the person Shuri wanted to see, but he was the closest one who could give her proper advice.