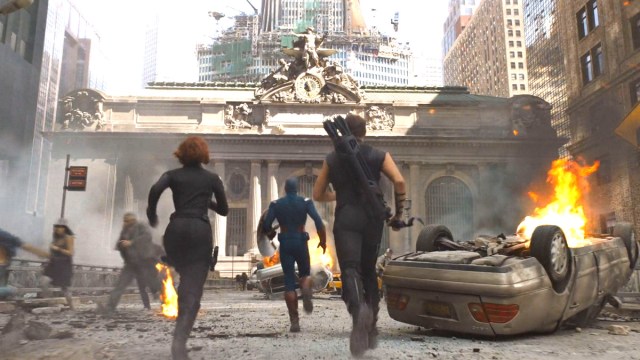 New York, New York—the city that never sleeps and the center of the Marvel multiverse. In the MCU, it’s where Stark Tower once turned into Avengers Tower, and where you’ll probably soon see the Baxter Building with a distinctive skyline packed with unique heroes.

Plenty of characters we’ve met in the MCU don’t come from the NYC of Earth-616, but the Big Apple can claim big hitters like Captain America Steve Rogers, Iron Man Tony Stark, and Spider-Man Peter Parker.  Of course, the perverse logic of superheroes means that New York’s protectors also make their city a universal target. When there’s a stack of powerful superheroes in one city, it’s no surprise a host of threats arrive in the Five Boroughs.

In the age of the Marvel superheroes, why would anyone want to live there? We’ve weighed the cons and the pros of living in the center of the universe.

The Battle of New York is one of those definitive why-isn’t-there-a-timescale-based-on-it moments in the MCU. The climax of The Avengers saw Loki’s Chitauri army attack New York, as the Avengers finally assembled to stop them, and Iron Man showed that he was prepared to make the ultimate sacrifice. The devastation to the island was massive, and we’ve seen how the battle has continued to impact New York. It’s not just the immediate collateral damage, but Kingpin’s ambitions (Daredevil), the technology that fell into the black market after the battle (Spider-Man: Homecoming), and the effect on children who have grown up in its shadow (Hawkeye).

Extend your condo: It’s a place where heroes are born

As Tony Stark said, “nothing’s been the same since New York.” Kate Bishop endured the horror of her father’s death during the Battle of New York, but it was the sight of the Avengers winning the battle, particularly the heroic actions of otherwise underpowered Hawkeye, that inspired her to become a hero. Decades before, Brooklyn resident Steve Rogers was driven to join the war effort in the city, setting him on the path to being Captain America. Over a decade later, Kamala Khan would imagine her idol, Carol Danvers, flying over the skyline.

Sell up: the Kingpin of crime

The Kingpin of New York City isn’t someone you want to meet. Wilson Fisk isn’t the only crime lord in New York City, but he’s one you can’t miss. He used the aftermath of the Battle of New York to try and rebuild a gentrified Hell’s Kitchen in the first season of Daredevil, and he hasn’t disappeared. Since then, he’s manipulated events and people to exert his influence over the city from behind prison bars and outside in a fine Hawaiian shirt. He and his criminal empire are a vast and growing threat that no one would want to live near.

If you find yourself in a scape, even with the business front of the Kingpin of crime, there’s help at hand. You could do worse than employ the services of Hell’s Kitchen lawyer, Matt Murdock. He is dedicated to his job, in possession of a strict moral code, and has some incredible reflexes.

Sell up: risk of authoritarian takeovers

Washington, D.C.’s Triskelion was the focus of the Hydra uprising that gutted S.H.I.E.L.D from within, but the effects were felt across the homeland. The agency’s headquarters, 219 West 47th Street, was a prime target and fell to Hydra during the events of Captain America: The Winter Soldier. It was a prime piece of real estate in the wrong hands.

Sure, you can make best buddies for a lifetime anywhere, but only in New York will you get Bucky-and-Steve-level BFFs. The connection that started in Brooklyn forged with a massive dollop of circumstance was enough for a frozen American hero to break decades of Hydra conditioning and turn the Winter Soldier good in the 21st century.

New York is a giant magnet for trouble. Of all the worlds across the Multiverse America Chavez stumbled into with a massive kaiju in pursuit, it was the MCU’s New York City. You know, the one where you have to pay for food.  It wasn’t great news for the city’s people, a building, or a bus.

Extend your condo: a safe place to get married

If there is a silver lining, it’s that you can invite local superheroes to your wedding, even those who are old flames. If you’re Christine Palmer, you get to make things awkward at your wedding and have them on standby just in case a kaiju attacks.

It’s hard to describe Tony Stark’s additions to the Manhattan skyline as the epitome of taste. However, the Captain America memorial revealed in Spider-Man: No Way Home may be one famous landmark that the residents of New York were happy to see under attack from a host of supervillains.

Extend your condo: even landmarks get superheroic

The S.H.I.E.L.D. Avengers initiative needed a giant beacon. At least, that’s what Tony Stark thought. The billionaire adapted his Broadway tower to be the Avengers Tower when the superteam had assembled and had some Shawarma takeout. A shining emblem but one that couldn’t last as the superteam headed upstate as events caused cracks to appear. For a short period, that New York tower was the home and heart of Earth’s mightiest heroes.

You know what it’s like. You’re helping an incredibly superpowered and angry individual cope with an unpredictable Hulk persona, and you get trapped between a gamma-grudge match. As Hulk and Abomination prepared to go head to head in Harlem, Samuel Sterns was collateral damage. His gamma-irradiated persona, The Leader, is set to cause more problems for the MCU when he returns in Captain America: New World Order.

Extend your condo: a superheroic night at the theater

If you want to catch a super-spectacular, sellout musical in your town, Rogers: The Musical is playing on Broadway. If Clint Barton thought it was ridiculous the Battle of New York was retconned to include Ant-Man, he’s not alone. Broadway veteran Marc Shaiman developed the fictional musical and included Scott Lang as a knowing wink to adaptations that stretch the truth. It’s likely to run longer than Spider-Man: Turn Off the Dark. What better way to pay tribute to Captain America?