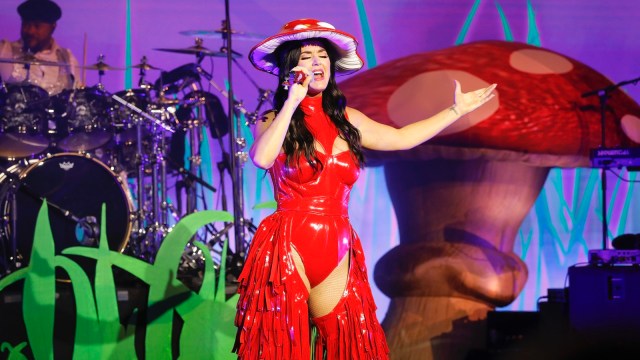 Well, this is definitely a new one. While it’s certainly an old trope to accuse the rich and powerful of the world of being “Lizard People” this may be the first time pop superstar Katy Perry has been accused of being one of our robotic overlords. But after Perry seemed to suffer some sort of a “glitch” with her eye during a Las Vegas concert, some fans are wondering whether she needs to be sent back to the factory for a firmware update.

Is Katy actually just the benign appearance of a Perrynator killbot programmed to prepare the way for the robot domination of the Singularity? Will her next hit be “I Exterminated Humanity (And I Liked It)”?

It certainly looked like a major malfunction. The singer’s left eye closed and kept closing despite several attempts by the platinum-selling singer to reboot. Perry finally was able to pull back into her “factory default” mode, open her eye and ask the audience to give it up for her band.

Some worried that the pop star may have cloned herself to handle the grind of her extended “Play” residency at Vegas’ Resorts World Theatre.

Of course, in all likelihood, this latest conspiracy (which is obviously a silly joke for most) is borne from the minds of those who have never had to deal with eyelash glue, performance makeup, hot stage lights, and contact lenses. Perry definitely has worn glasses in public before, and while there’s a chance they may be merely cosmetic, if they are prescription then the singer most likely dons contact lenses. If that’s the case, it may be that Perry was suffering from a major lens malfunction as opposed to a 404 Error Message.