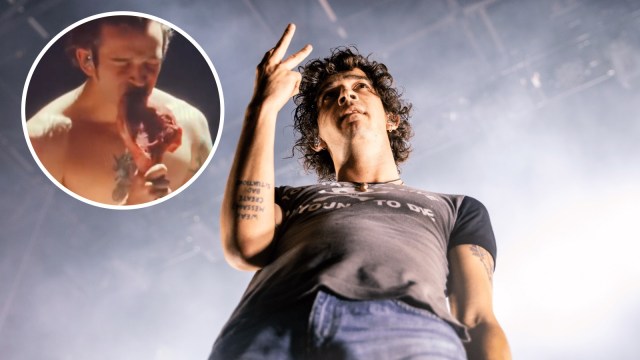 In perfectly normal music news, The 1975 have kicked off their “Being Funny in a Foreign Language” album tour. In extremely bizarre and aptly 2022 news, Matty Healy was just seen eating a slab of raw meat on stage at the first gig at Madison Square Garden, New York.

A clip of the band’s frontman is quickly beginning to make the rounds on Twitter, and – well, it is exactly what we said it is. Matty Healy, shirtless, on his knees, casually chowing down on raw meat with a deadpan expression on his face before crawling away.

The reactions on social media are mostly bewildered, with onlookers having no earthly idea what to make of the weirdest display by a celebrity this week.

All in the year of Kanye West well and truly going full scumbag and torching his reputation (then somehow burning the ashes), and Will Smith slapping Chris Rock at the Oscars.

The world is doing its best to try and understand what Healy is getting at with this…let’s call it an art piece, but to no avail. This accursed year honestly keeps on giving.

Who would have thought we’d be writing the sentence: “In 2022, the internet imploded when discussing whether or not Amber Heard took a dump in Johnny Depp’s bed, also Matty Healy ate raw meat on stage at a 1975 gig.”

If you’re a fan of The 1975’s music, as we mentioned, the band is currently touring its new album “Being Funny in a Foreign Language,” and all things considered, the album was fairly well received by critics and audiences, with singles like “About You” and “Oh Caroline.” However, do you like them enough to put up with some bizarre antics from its frontman?

Granted, 40 years ago, Ozzy Osbourne bit the head off a live bat on stage, but that turned out to be an unfortunate accident. This seems pretty intentional. At least the pandemic is behind us and live music is well and truly back?