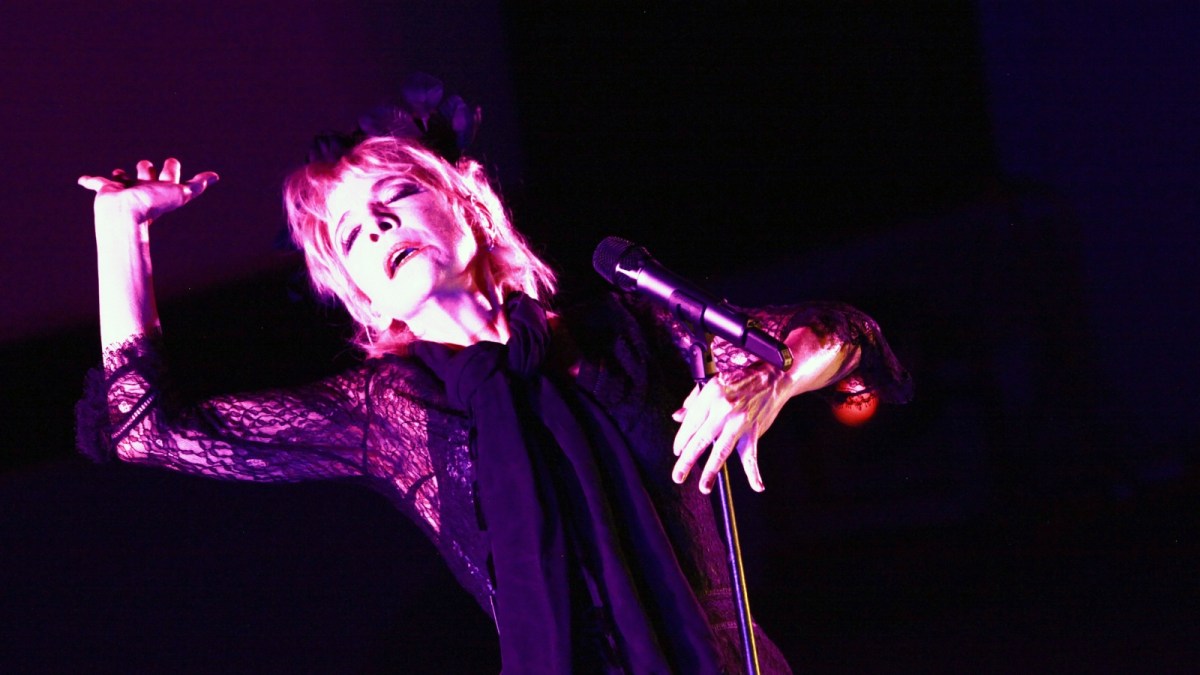 2022’s a sad year for fans of David Lynch’s work. Within the space of just two months, we lost two of Lynch’s most critical musical collaborators, each of whom left behind an incredible contribution to his distinctive work and other spheres of music.

When it was announced that Angelo Badalamenti had died in December 2022, thoughts naturally returned to the death of Julee Cruise, who passed away in July 2022.

Without the pair, the vivid world David Lynch has shaped on big and small screens wouldn’t be the same. What we know as ‘Lynchian’ cinema and TV is as much about the writer, director, and sometimes actor’s choice of collaborators as his distinctive vision.

Blue Velvet and Twin Peaks wouldn’t be the same without Julee Cruise, a singer known for her distinctive ‘dream pop’ songs.

Julee Cruise was born in Creston, Iowa, in December 1965. After studying the French horn at Drake University in her home state, she moved to New York City, where her musical future was set.

Cruise met Badalamenti through the musical theater scene in New York. After she sang at a theater workshop Badalamenti had produced, opportunity came knocking with Lynch’s 1986 classic Blue Velvet. A year before the movie’s release, Badalamenti had been composing the score when it became clear that using the Elizabeth Fraser-fronted version of Tim Buckley’s Song to the Siren would be too expensive for the production.

Badalamenti composed a new but similar pop song, with lyrics provided by Lynch and at the composer’s suggestion, the haunting vocals were supplied by Cruise. The pivotal movie moment and the cult following Mysteries of Love inspired was just the start.

Cruise was subsequently signed by Warner Bros. Records and released her first album Floating in the Night, in 1989. The second track of the album, Falling, was chosen by Lynch to be the atmospheric instrumental theme to his new ABC series Twin Peaks, for which Badalamenti composed the music.

Badalamenti was also a producer and performer on the song. In the essay A Marriage Made in Heaven: The Music of Twin Peaks, he explained how vital the piece was to the show.

“In the ruckus of beers flying through the air at The Roadhouse, we have Julee singing a beautiful, slow-tempo song, and it’s so outrageous. You would never have that kind of song in a place like that.”

He continued, “The songs with Julee serve a two-fold purpose: They contrast the visuals and they set the tone for the show.”

The theme song won the award for Best Pop Instrumental at the 33rd Annual Grammy Awards.

Cruise was most famous for the song Falling, with her dreamy lyrics appropriately floating over the mesmerizing music.

The single charted around the world and reached number 7 in the UK Top 40. The music video was faithful to the series’ dreamy aesthetic, featuring Cruise performing the song through soft curtains in red lighting, intercut with scenes from Twin Peaks. In the show, Cruse appeared at the Roadhouse singing parts of the songs “Rockin’ Back Inside My Heart,” “The Nightingale,” “The World Spins,” and “Into the Night” from her first album.

She was fundamental to the sound of Twin Peaks, so it wasn’t a surprise Cruise returned to contribute to the belated third series of the show in 2017. Once again, she appeared in front of the camera, singing “The World Spins” in Twin Peaks: The Return’s 17th episode.

In 2018, Cruise collected the original demo versions of her Twin Peaks classics “Floating,” “Falling,” and “The World Spins” on an EP called Three Demos.

For most of the 1990s, Cruise toured with The B-52’s as Cindy Wilson’s stand-in. She also contributed to albums by several other artists, including Moby, Hybrid, Khan, and Super DJ Dmitry. Memorable cover versions she recorded included R.E.M.’s “It’s the End of the World as We Know It (And I Feel Fine),” Elvis Presley’s “Summer Kisses,” “Winter Tears,” Eurythmics’s “Sweet Dreams (Are Made of This)” and David Bowie’s “Space Oddity.”

Cruise’s death at 65 came after a series of health battles, including lupus, depression and alcohol and drug addiction. Announcing her passing on the B-52’s Facebook page, Cruse’s husband of over 30 years, Edward Grinnan, wrote:

“For those of you who go back I thought you might want to know that I said goodby (sic) to my wife, Julee Cruise, today. She left this realm on her own terms. No regrets. She is at peace. Having had such a varied music career, she often said that the time she spent as a B filling in for Cindy while she was having a family was the happiest time of her performing life.

She will be forever grateful to them. When she first stepped up to the mic with Fred and Kate she said it was like joining the Beatles. She will love them always and never forget their travels together around the world.”

He concluded, “I played her Roam during her transition. Now she will roam forever. Rest In Peace, my love, and love to you all.”

With Angelo Badalamenti’s death, 2022 will be forever marked as fans of Twin Peaks and Lynch’s wider work. Among many other highlights, they leave behind a phenomenal and lasting piece of TV history.