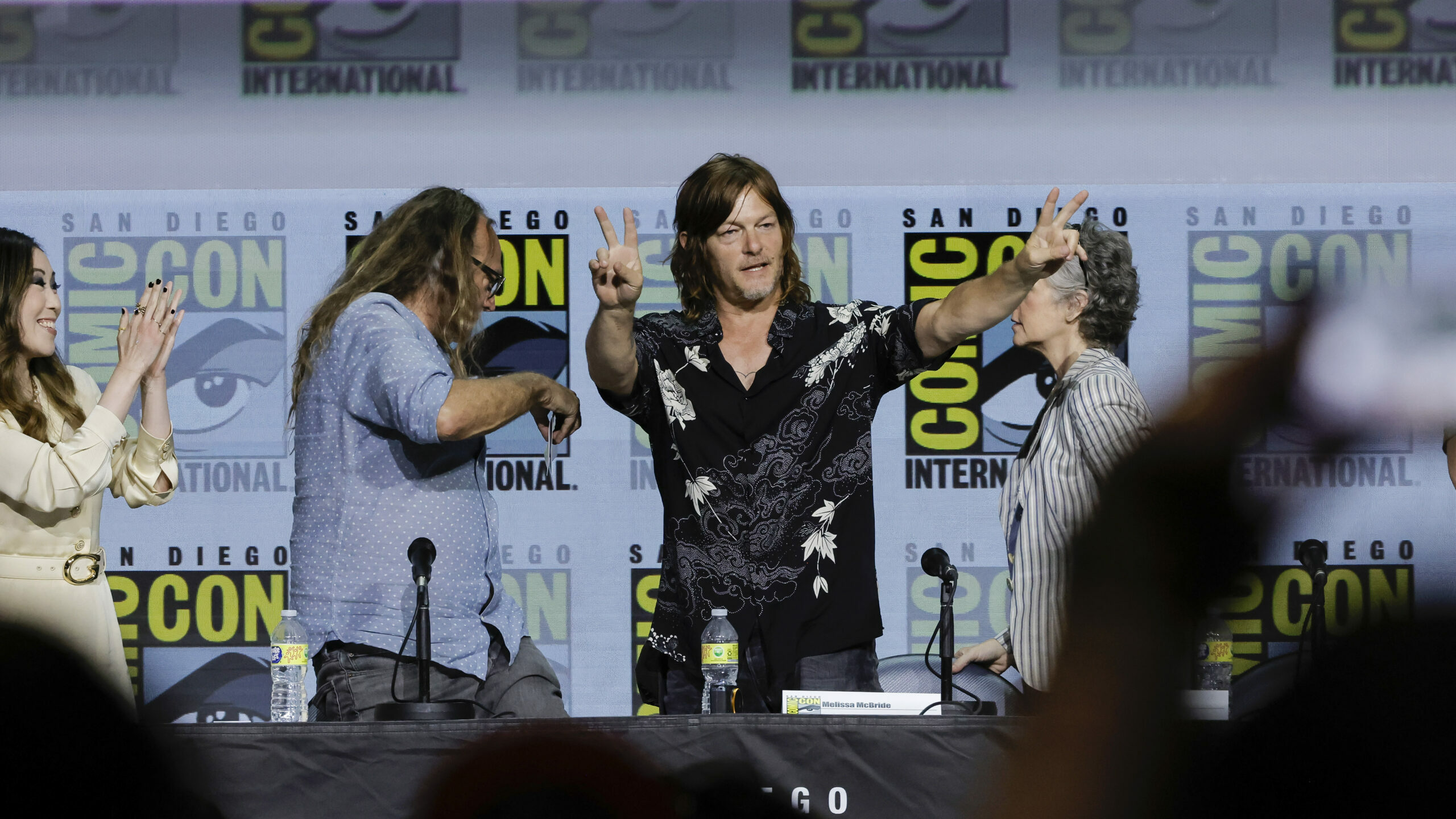 The Walking Dead invited troves of the undead to Hall H for the final time during 2022’s San Diego Comic-Con — well, sort of. While the universe which houses TWD is expanding, its central point — the heartbeat that started it all — is on its brave final act.

At least, fans hope brave is the word we’ll use to describe what happens next. The last episodes will be a battle, unlike that which the family has faced before; the Commonwealth takes no prisoners. Well, okay, the Commonwealth absolutely takes prisoners, and they’re treated rather poorly.

It’s not that our beloved characters haven’t fought evil before; they’ve looked it in the face and in some circumstances, found common ground with it. It’s just that this is different. It’s a multifaceted evil, well-crafted and life-altering.

In 11 seasons, our favorite characters have fought alongside each other, making friends and enemies as they’ve navigated life among the undead. With all of the hellos and goodbyes we’ve crafted, the end seems almost unfathomable, but the truth is, it’s right here.

So when The Walking Dead‘s final SDCC panel took place, the audience was glued to their every word, and fans at home were refreshing their social media accounts at record speed to find out what was happening at the convention. It was an emotional journey; tears were shed, and we learned a few exciting things.

The Walking Dead‘s universe is ever expanding

A new trailer for Tales of The Walking Dead aired at SDCC before Terry Crews, Danny Ramirez, Samantha Morton, Channing Powell, and Michael Satrazemis took the stage alongside Scott Gimple.

Gimple shared that the series’s premise is simple: fan questions inspired them to give insight into a more profound realm of The Walking Dead’s universe. Comicbook.com shares that Gimple says it’s all about evolution and fleshing out the idea behind The Walking Dead.

The six-episode series begins airing in August and will give insight into existing characters and new ones, further explaining how vast the universe is and how complex of a story there still is to be told.

The last episode will pay homage to a journey we’ve all taken together, which was the panel’s central theme. The Walking Dead has belonged to the fans as much as it belonged to the cast and crew; it’s a story we’ve all been a part of, and Norman Reedus pointed that out as he spoke to the audience.

The Wrap quotes Reedus by saying the following:

“We held onto that core belief system of doing it for real, that sense of family, I’ve said it a million times, it’s not just our show, it’s ‘our’ show.”

Greg Nicotero also knew that the family we’ve created would depend on them for an incredible final episode, and he’s sure they’ve put it together. He believes it honors the journey and felt obligated to ensure just that.

Nicotero has directed some great episodes throughout the series’ history. From Judge, Jury, Executioner, This Sorrowful Life, Us, and No Sanctuary to Last Day On Earth, Mercy, The Storm, and A Certain Doom — some of our favorite episodes have had Nicotero’s influence.

While it’ll be hard to picture the pop culture realm without The Walking Dead‘s main story, the sentiments from the cast and crew further prove that they are ensuring a proper (and emotional) send-off for the show we’ve grown up with.

Carol and Daryl still have more stories to tell

Daryl and Carol have been a fan favorite pairing since the beginning, and their relationship has only grown closer with time. Their friendship runs deep, and several fans have shipped them into romantic relationships too. It’s hard to picture one without the other, so fans were thrilled when news broke that they’d be getting a spinoff together.

However, that doesn’t mean the end for these two, even though we’re not quite sure what that means.

During the panel for SDCC, Norman said there is a realm where Norman, Carol, and Connie can exist together. He also notes that the story between himself and Carol isn’t over — a welcome statement, especially for fans who were heartbroken when the news of Melissa leaving the series was made public.

“I think there’s a world where all 3 of them can live happily. I do want to say, since it’s been brought up, the Carol/Daryl story isn’t over.”

McBride was so emotional through the panel that she took the experience in more than she spoke about the future, but it’s apparent that she’s not ready for that story to be wrapped up either. It’s yet to be determined in what capacity Daryl and Carol’s future will continue, but we’d love to see them together again after The Walking Dead.

Rick and Michonne are coming back (for a series)

The biggest surprise of The Walking Dead’s final SDCC panel came with the appearance of two beloved characters that fans flat-out miss. Danai Gurira and Andrew Lincoln appeared on stage towards the end of the panel and brought exciting news to anxious fans. The story between these two love birds isn’t over yet!

Initially, Rick was set to get a movie that would give insight into his future, but fans will instead get an “epic love story” in the form of an AMC Plus series. Michonne set out to find Rick, and the last we saw of her, she’d begun making progress, but with all of the drama and continued fight for survival with the group has been the focus of the series.

The solo series for Michonne and Rick will allow us to see what will undeniably be one of the most emotional reunions in The Walking Dead history. Their meeting up again will lead to (we’re crossing our fingers) a happily ever after among the undead. The series will have six episodes, and fans can’t wait to discover what happens next.

Plus, we’re still very curious about how Rick was saved (no spoilers if you’re behind, but you’re going to want to catch up soon.)

The Walking Dead‘s final SDCC panel was missing two essential influences, but there was an excellent reason for that — they’re pretty busy. Lauren Cohan and Jeffrey Dean Morgan are filming Isle of the Dead and continuing a story fans never anticipated getting at all.

Maggie and Negan have had one of the most tumultuous relationships in the show’s history, rightfully so, and an alliance of any kind between them was once a certain joke. As Negan’s character arc continues, Maggie has been able to stomach him, and something will happen in the next set of episodes that lead them on a path to working together. It’s a spinoff that fans are excited to see, if for no other reason than to find out why these two are together in a new place and what they’re trying to achieve.

Isle of the Dead is set to premiere next year — and Morgan and Cohan are hoping to be at SDCC in 2023 to tell fans even more.

The Walking Dead is one big family

It’s not a new development, nor is it a big surprise, but a highlight of The Walking Dead‘s final SDCC panel is that fans are part of the family that the series has built. From Halloween in 2010, the bricks have been laid for one of the most epic foundations in pop culture. Who knew a series about surviving the undead would lead to a family worldwide?

It’s a testament to everyone involved with the series — the creators, writers, producers, actors, videographers, and everyone who’s given a piece of their talent to ensure the show’s success. The characters we love have become so prevalent in pop culture that it’s hard to imagine the entertainment realm without them.

You’ve got villains so evil that audiences genuinely loathe them, heroes, so strong that we root for them the way we’d cheer on people in our own inner circles. The storyline is so multifaceted that it’s almost easy to forget that the undead are such a prevalent feature in the series — until someone stabs one in the head, of course.

If you add in the dedicated fans around the world and the talent and love they bring to the table — you’ve got a recipe for success. Fans travel to Senoia, Georgia, to see all the spots where filming happens. They board trains and planes and rent cars to travel to conventions to meet their favorite actors and friends from within The Walking Dead‘s universe. It’s truly an incredible experience.

So it’s easy to assume why the final appearance of The Walking Dead was such an emotional one. While the spinoffs will likely have their seat in Hall H in the future, it’s goodbye to the first set of characters, this particular family, and the storyline that started it all.

You can see The Walking Dead‘s final episodes when AMC begins airing them on Oct. 2.