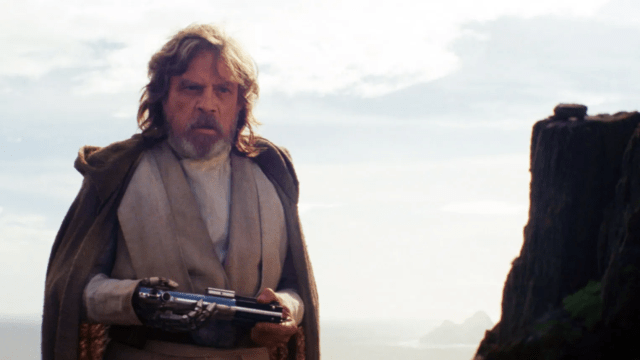 It would be a pretty big understatement to say that the Star Wars Sequel Trilogy wasn’t universally beloved among the fanbase, and while The Force Awakens seemed to emerge relatively unscathed, both The Last Jedi and The Rise of Skywalker faced a barrage of criticism for vastly different reasons, leaving longtime fans more disenfranchised than ever before.

In a further example of how fickle people can be, both Rian Johnson and J.J. Abrams found themselves being widely thanked for their contributions to the franchise despite many of their creative choices being absolutely savaged by an awful lot of people when their movies were playing in theaters.

One of the storylines that really upset the diehards was the treatment of Luke Skywalker, something that even Mark Hamill admitted he wasn’t happy about. The Force Awakens ended on the cliffhanger of having Luke back in possession of his lightsaber, only for The Last Jedi to open with him throwing it away and revealing himself to be a bitter hermit uninterested in the conflict that surrounded him, which was the exact opposite of how the iconic character has always been portrayed.

He might have got a minor redemption arc by the end of the movie and showed up as a helpful Force Ghost in the retcon-heavy Rise of Skywalker, but in the eyes of many fans, the damage had already been done. In fact, in a recent interview, Avengers: Endgame directors Joe and Anthony Russo admitted that if they had been in charge, they’d have focused on Luke’s story and his return from exile first and foremost.

“I mean, I think being such Star Wars fanatics, we would’ve probably focused on the Luke Skywalker story. And so, to me, there was the potential for three movies focusing on that arc coming to completion.”

The entire Sequel Trilogy managed to introduce a whole host of new characters, planets, villains and galaxies, yet still somehow remained all-too-comfortable living in the shadow of the franchise’s storied past. Luke Skywalker’s long-awaited return to Star Wars should have been the pinnacle of these movies as he led the resurgent Jedi, but instead he sat on a rock and died alone before being brought back as a ghost to try and stem the overwhelming backlash to his arc.