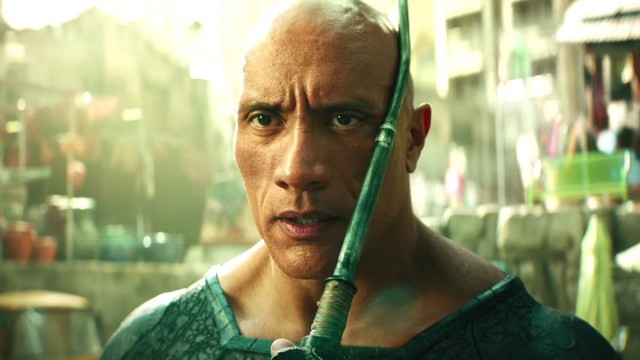 Dwayne Johnson’s Black Adam is coming to theaters in October, but before that, fans will get a look at what the film has to offer when it comes to a building in San Diego almost as big as the muscles Johnson packed on to play the role how he intends to do so.

Johnson hypes up the promotional moment in a post published on his Twitter earlier today. In the video above, he promises real hype as sweat glistens from his bald dome, says his character is the most electrifying in all of the DCEU, and fans are pumped. In the comics, Black Adam is a ruthless villain and an arch-enemy of Zachary Levi’s Shazam, and several are ready for an evil icon.

Another fan re-tweeted Johnson and was tickled by his play on his iconic phrasing from his days in the WWE.

Though, for some fans in the torrent of overwhelmingly positive responses to the news as of filing, one word suffices to convey their excitement about The Rock taking on the live-action version of the classic comic book character.

Black Adam opens Oct. 21. It also features Aldis Hodge as Carter Hall/Hawkman, Noah Centineo as Albert Rothstein/Atom Smasher, and Pierce Brosnan as Kent Nelson/Doctor Fate. A faceless Superman cameo is also rumored to the frustration of fans who want to see Henry Cavill return after being away for about a half-decade and seeing other faceless turns in Shazam!, too. You never know what twists are in store for the DCEU, though.