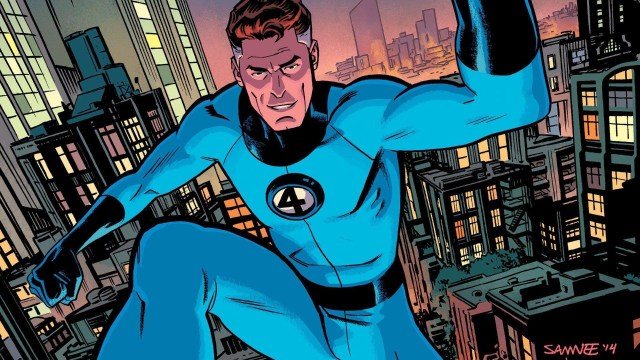 Marvel fans both commended and criticized John Krasinski’s Earth-838 Reed Richards in Doctor Strange in the Multiverse of Madness. But, whatever your opinion, we soon got confirmation that this was a one-off and Krasinski isn’t going to reprise the role in the Fantastic Four MCU movie.

Fan casting promptly began, with many eyeing Penn Badgley, known as Joe Goldberg in Netflix’s You, to take up the mantle. Before Krasinski, there have been three renditions of Mister Fantastic; Alex Hyde-White in the 1994 The Fantastic Four film, Ioan Gruffudd in the 2005 film Fantastic Four and its 2007 sequel Fantastic Four: Rise of the Silver Surfer, and Miles Teller in the 2015 film Fantastic Four. Could Badgley join them?

Over on Instagram, renowned artist Bosslogic has uploaded an incredible rendition of Badgley as Reed Richards, and as far as comic accuracy, he doesn’t look half bad sporting a full beard and spandex.

Despite whiling away the hours bringing Badgley’s Richards to life, Bosslogic admits that a coveted spot in the Fantastic Four isn’t in the cards for the You actor and thinks he’d be far better suited to play their archenemy Doctor Victor Von Doom. Judging by the comments, many fans agree that while Badgley delivers a knock-out performance as Joe Goldberg, he isn’t the MCU Reed Richards they’re yearning for.

One comment from Canadian actor and internet personality, Harley Morenstein read: “This is cool. I’m down with it. He’s good at the roles he plays and I think this casting says a lot about the angle they’ll take with Reed Richard’s and I’m not mad at it. Also, I’m over Jim as Reed ever since he revealed Blackbolt’s strength right off the bat to Scarlet Witch lmao.” Given that Morenstein’s comment received over 140 likes, it’s safe to assume that many Marvel fanatics agree.

Meanwhile, other comments expressed various levels of distaste. There are plenty of hard passes from Marvel fans with many opinions falling under the “No,” “God no,” and “Nooooo…” categories.

We’re looking at an estimated early 2023 release for You Season 4, but until then, binge-watch all three seasons on Netflix. More Fantastic Four casting news as we hear it.