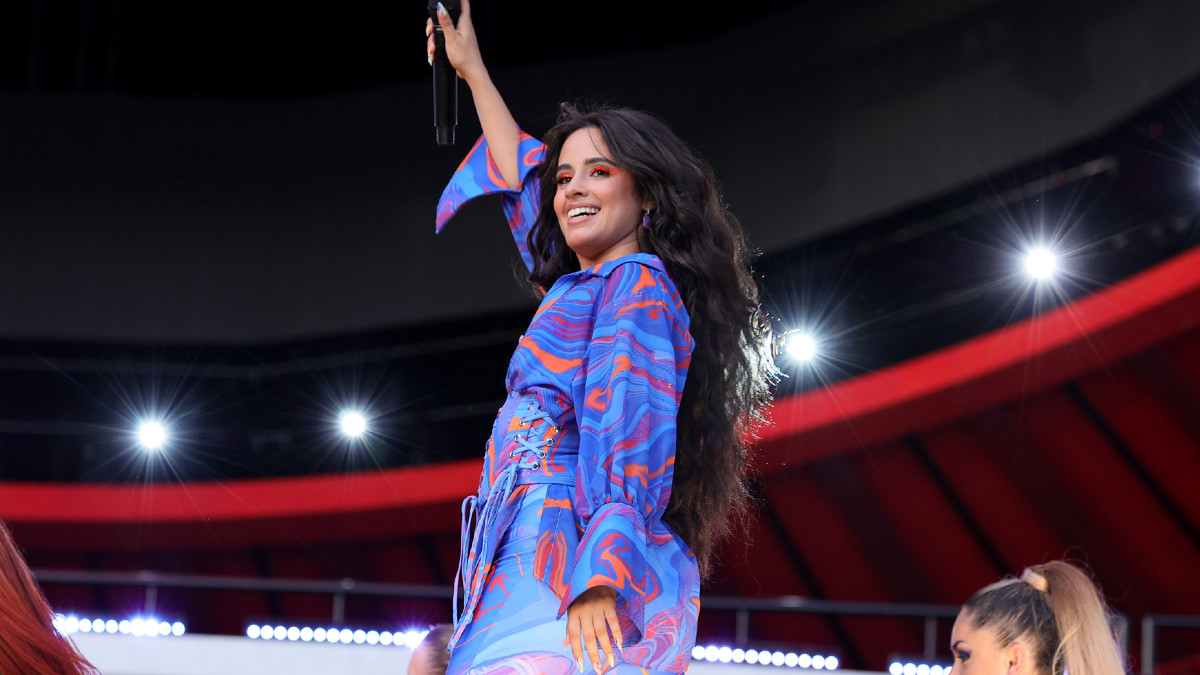 Camila Cabello is currently in the middle of a whirlwind promotional tour to plug her new album Familia ahead of its April 8 release date, which is her first studio album since 2019’s Romance. Last week, the 25-year-old gave fans a taste of the album’s first single, “Bam Bam,” a collaboration with Ed Sheeran.

However, while promoting the new album and single remotely on BBC’s The One Show on Monday night, Cabello suffered a bit of a wardrobe malfunction when asked by one of the hosts to show off her favorite dance move, making the interview more active than she likely expected going into it. The singer was wearing a flowy button-down shirt with a plunging neckline, and as she stood up and adjusted her shirt, viewers at home caught a quick nip-slip.

Cabello joked to the hosts that she almost flashed them before adding that she hoped they “didn’t see nipple.” But alas, it was too late. Comedian Alan Carr, who was one of the guests in the studio, quickly clapped his hand over his mouth and laughed that he had been “a victim of cyber flashing!”

“My mom is in the next room right now, possibly freaking out about my wardrobe malfunction,” said Cabello nervously, according to BuzzFeed News. But apparently, she still rolled with the punches — or, wardrobe malfunction, more accurately — and soldiered on through the rest of the interview.

Unfortunately, it didn’t take long before Cabello’s accidental flash made its way around the internet, where many people spread clips and images for posterity. But also, seeing that she didn’t intend to show her breast on live TV, one could also argue that circulating the images is a gross invasion of privacy. On Twitter, in particular, there was no shortage of people to point out that fact.

“People making fun of Camila for the nip slip? it wasn’t a big deal and certainly wasn’t her fault,” tweeted one user. “The people who are sexualizing it? it’s human biology. women have it for a reason, not for ur enjoyment. get over it.”

“Get a grip, saddos,” added another.

“You lot are weird as fuck for spreading the Camila Cabello nip slip thing like it’s not really funny she didn’t want that to happen,” tweeted yet another user.

“Bro, y’all have to be creeps and literally be posting it everywhere,” remarked another. “It’s grim bless her.”

One woman called out the UK’s Express tabloid, wondering how many articles they’ll manage to write about a blink, and you’ll miss it nip-slip

But for her part, Cabello continued to take the moment in stride, later joking about the incident on TikTok. “When my stylist asked me if I wanted nip covers, and I said no,” she quipped while lip-syncing the lyrics to Muni Long’s “Time Machine.”

“Least they’re cute tho,” Cabello commented on her own video, adding the smiling face with tongue-out emoji. Be that as it may, the internet is literally full of boobs that aren’t unsolicited nudes. Leave Camila’s alone!