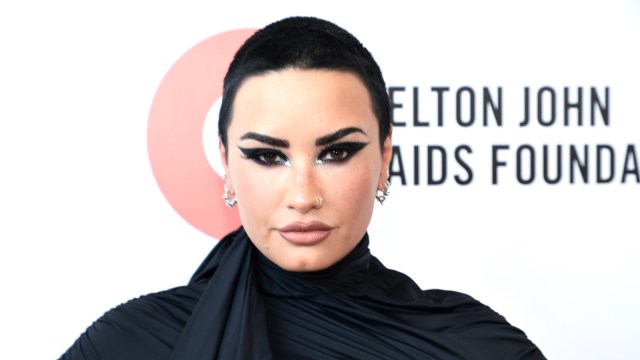 It’s been a busy week for Demi Lovato on The Tonight Show, being a guest one night and then a co-host the next, all while brightening up a show that normally requires no such enhancements, thanks to the always joyful Jimmy Fallon.

Lovato, who performed her new single, “Substance,” on Tuesday night’s show, swung back last night to host alongside Fallon. Introduced during the monologue, she embraced her co-host role and never once seemed to be able to stop enjoying it as her natural glow lit up 30 Rockefeller Plaza.

Before her Wednesday night co-hosting gig, Tuesday night’s show also featured her, and not only as the musical guest. She sat down and talked with Fallon about her new album (titled Holy Fvck), her upcoming tour, and the fact that she’s turning 30 this week.

Last night, Lovato received a standing ovation when she appeared during Jimmy’s monologue and proceeded to participate in “News Smash,” a regular segment on the show that features a mashup delivery of the news with humorous segues.

The funniest joke came at the end of the monologue when Lovato attempted to promote her tour, but, because of the name of the tour (“The Holy Fvck Tour”), Fallon kept interrupting her before she could speak that last word.

The most entertaining segment of the night, however, was “Can You Feel It?” which forces Fallon and Lovato to touch mystery objects in a box and try to figure out what the object is. The final object was the night’s featured guest, Kenan Thompson.

Then, after Fallon’s generous birthday gift gesture where he presented Lovato with a new Gibson guitar, a red one with a similar design to the guitar she played the night before, Fallon and Lovato interviewed Thompson shortly after his surprise appearance.

Guest Jeremy Allen and a musical performance of “All the Good Times” by Angel Olsen rounded out the show.

Lovato’s co-host appearance comes on the heels of Megan Thee Stallion‘s equally entertaining appearance in the same role last week. Megan was also promoting her new album, Traumazine, and her dog nearly stole the show if not for Megan’s natural charisma.

Obviously, the co-host role can be awkward, especially considering that they literally sit next to Fallon behind his desk while interviewing guests, making it appear as if the guest is being interviewed for a job by two hiring managers. Still, both Lovato and Megan thee Stallion were welcomed additions to the show. Jimmy Fallon manages to make it all work while involving them in his interviews, embracing the positive energy of the co-hosts, and overall making it a fun experience for them and for the audience.

Perhaps we’ll see more frequent co-hosts in the future; maybe once a month or so would be perfect, but regardless of whether or not it becomes a frequent event, it certainly will happen again, and that’s a plus for the already entertaining show.