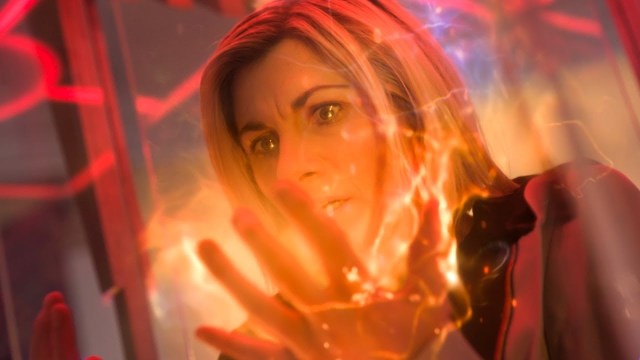 In less than a week, Jodie Whittaker is bowing out as the thirteenth incarnation of the titular character on Doctor Who, with Sex Education star Ncuti Gatwa replacing her and old showrunner Russell T. Davies once again coming on board to carry the show for the foreseeable future.

The trailer for this centenary special episode – “The Power of the Doctor” – has already teased the return of many enemies from Whittaker’s tenure, including the Lone Cyberman, Sacha Dwahan’s Master, the Daleks, and the Cyber-Lords. It might also get into the as-of-yet unexplained Timeless Child mystery, but most importantly of all, the special will be a celebration of Doctor Who‘s past, present, and future.

Chatting with the show’s official website, Whittaker teased “The Power of the Doctor” by talking about how it encapsulates everything Whovians love about the long-running British sci-fi series.

“’I would say that Whovians are in for an absolute treat,’ she said. ‘We celebrate the old, the present, and the new. It’s a wonderful homage to the legacy that Doctor Who has had. It encapsulates all the things the fans love about Doctor Who – whether it be old monsters, returning characters, new elements, everything that unites Whovians is in this episode. If you haven’t seen Doctor Who before this special will be sure to hook you in for your new Doctor.’”

Of course, with Jodie Whittaker’s regeneration will come the overbearingly cruel cycle of change that every Whovian has to go through at some point in their lives. The new Doctor will be looked at in a way that borders on animosity, though nothing that Ncuti Gatwa should take too seriously.

Given time, everyone will reminisce about Jodie Whittaker’s run and sit in amazement as Gatwa’s takes them away to adventures across all of time and space. In fact, with Russell T. Davies at the helm once again, that is a guarantee.