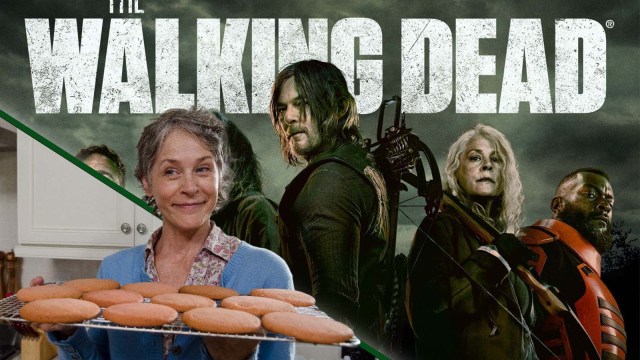 It’s time to grab a plate of cookies, a bow and arrow, and your favorite four-legged pal named Dog because the final season of The Walking Dead is on the horizon, and it’s going to be an emotional journey

EW released the first batch of images from The Walking Dead’s final episodes, making us all quite emotional. The series debuted on October 31, 2010 — a very fitting way to celebrate Halloween — and we’ve grown up alongside these characters for over a decade since.

In addition to soldiers from The Commonwealth, the first look sees an emotional Daryl with an injury to his cheek and a glimpse at Carol in the kitchen — likely serving up some justice while remaining under the radar. Carol is calculated; she knows what she’s plotting.

In addition to the first look images, EW also revealed teasers from showrunner Angela Kang on what we should expect going into the final episodes. Daryl is on a new type of journey this time around.

“You’re going to see Daryl have to step up in some of his decision making in some key ways, and he’s going to be very crucial to the way all the events play out in this season. We also to remember that Daryl is a parental figure to Judith and RJ, and that’s an important part of the story as well — his role with those kids and the things that they’ll all do to protect the children of the apocalypse.”

What can fans expect from Carol? She’s also on a new walk, and it’s going to be an exciting one. She’s getting braver and more skilled — she’s a force to be reckoned with.

“Carol is somebody who’s come so far in her journey, and there’s been times when she’s been really, really tormented about the things she’s had to do, but I think Carol’s in a place of a pragmatic acceptance of the decision she has to make. We’ll get to see some really cool moments from Carol as she’s just outwitting and outlasting those that are seeking to do harm to her folks. She gets to have some memorable moments with both villains and our heroes. She’s like a chess master who’s playing 4D chess while other people are just kind of cranking along moment to moment.”

With San Diego Comic-Con on the horizon, posters of the final run of The Walking Dead have also been shared online. They’re on display at SDCC now for those in the area who want an up close and personal look.

The Walking Dead hosts its final SDCC panel this Friday, July 22 and the final episodes begin airing this fall.