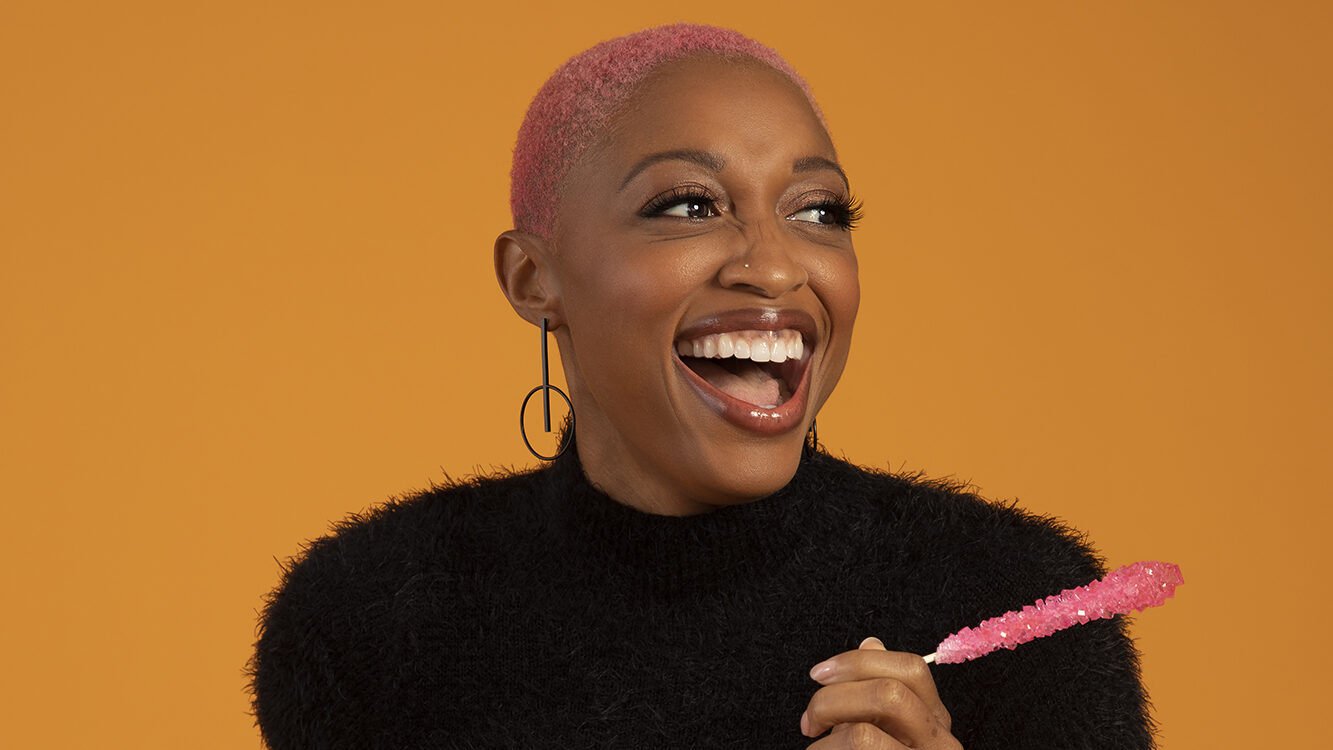 Disney Plus continues to add to its impressive lineup of Marvel content with Ms. Marvel, premiering its first episode to excited fans today.

Ms. Marvel follows a young woman named Kamala Khan, played by Iman Vellani, as she admires Marvel superheroes while balancing her life as a high schooler. Soon, that adoration turns into something else, as she happens into powers that will one day allow her to fight alongside her greatest idols.

In addition to the superheroics, Ms. Marvel highlights family ties in a way that gives generous space for those closest to Khan to shine. Khan’s brother Amir is engaged to a woman named Tyesha Hillman, and she brings a lot to the table within the storyline.

We got to speak to Travina Springer, who breathes life into the character of Hillman, about the impact of Ms. Marvel, the importance of her character and how the role echoed Springer’s own life. Hillman is a character that fans will undoubtedly relate to, and Springer hopes audiences worldwide are impacted by the truth in the storytelling as a whole — and in her character.

Springer is a breath of fresh air, and her commitment to Hillman and Ms. Marvel as a whole makes it very easy to get excited about the series.

Ms. Marvel premieres on Disney Plus next month; we’re so excited to see the series. What initially drew you to the project?

Springer: Playing a character in a Marvel show that I could understand, relate with, and do justice by, felt so aligned with what I want to do as an actor. Not only is this a huge opportunity for me, but it also matters to me that I am representing a character who we don’t see often in stories. I’m so excited for everyone to see the series too!

You play Tyesha Hillman, Amir’s fiancé in the series. For unfamiliar fans, tell us a bit about Tyesha.

Springer: Oh, I love Tyesha! She is a strong, witty, and self-assured woman who absolutely loves all things, nerd. She’s not afraid of following her own desires, which is what I really love about her. Her relationship with Amir and the Khan family is beautiful and fun, which I think is important for audiences to see because characters like these have only recently been “normalized.” I can’t wait for fans to see how it develops and plays out.”

Her relationship with Amir will undeniably link her to Kamala, but it’s her own personality and the strong woman that she is that will allow her to serve as a stand-out character. Hillman seems fun, powerful, and someone you want to be friends with — that rings true for Springer as well. Springer is a Muslim convert in her own life, and it allowed for a depth and authenticity in Hillman — one she is proud to honor.

Your character is proud of their faith, and it’s important to her. Being a convert to Islam on the series mirrored your real-life story too. What was it like to portray a character so close to your own life in that way?

Springer: It was truly a gift to play a Black Muslim convert who challenges so many stereotypes and misconceptions of what being a Muslim woman means. I am more than just a “Black Muslim,” but when I auditioned for the role, making choices in how I wanted to play her came with ease because I didn’t need to do research on that aspect of her life.

I’ve lived it. My own life experiences as a Black woman who converted to Islam lends to this character’s authenticity. Tyesha wears the scarf, and I do not but having an understanding of what that meant for her as a Muslim woman absolutely informed my choices. I was able to add my input on how she looked and was styled on the series as well. Overall, it was special being able to bring so much of myself to the role.

Did you find it hard to open up about converting to Islam? Is that something we might see more of your character Tyesha walk through?

Springer: On a personal level, no, I didn’t find it hard to open up about my embracing Islam at all. In my stand-up comedy and in life in general, I’m very out and vocal about my experience being Muslim. Regarding Tyesha, everyone is going to have to wait to see how her storyline unfolds, but I personally hope we get to not just see more about her relationship to Islam, but more of her story in general. When people talk about Muslims in America, there is often erasure of the Black experience and even more so of the convert experience. I believe having a character like this in the Marvel Universe on such a large scale will do wonders for the community and visibility.

Disney and Disney Plus highlight storytelling from different cultures and heritages; what did you learn about that mission during Ms. Marvel?

Springer: Disney is leaning toward elevating diverse voices with their storytelling. It’s exciting to see them not shy away from Kamala’s Pakistani American heritage and Muslim identity. Authentic storytelling can only happen when there is inclusive representation both in front of and behind the camera, and I’m happy that this was the case with Ms. Marvel.

If you could have one superpower, what would it be?

Springer: Ah, what a fun question. I feel it changes week to week, but today, if I had a superpower, it would be the ability to time travel. I love the idea of visiting other time periods because of my love for history. Sometimes, it wouldn’t even be that deep. I would sometimes go back in time to just wake up 30 mins earlier so I wouldn’t be late!”

I’m an Army kid myself, and we moved around a lot growing up. I always say that lifestyle prepared me for life in a different way. Do you think that helped you in your career path in terms of rolling with changes and being comfortable in meeting new people so frequently?

Springer: Absolutely! Always being the new kid at such a young age helped prepare me for adapting to different environments and quickly picking up what the “lay of the land” was. I think it also helped me learn how to work well with others and inadvertently made me become a master at code-switching. I feel it made me more open-minded and fearless because my social environments were always changing.

You really fell in love with acting and bringing new characters to life at Florida State. Do you remember the first time you knew you wanted to make it a career?

Springer: I think I knew at a younger age, like many creatives of color, I hadn’t truly given myself permission to see it as a realistic career choice. My parents always expected me to get a college degree, so I needed to follow through on that plan first. I’m glad I did; I had a wonderful time at FSU! It was probably my junior year in college when I decided to move to LA and embark on my acting career.

You volunteer as an ASL interpreter and have worked with Deaf West Theatre; why was it essential for you to learn ASL, and what has been the most rewarding part of your volunteer work with them?

Springer: I took ASL in high school and fell in love with it, and with this love, started my deep love and respect for the Deaf community. I have worked and have volunteered as an ASL interpreter for over ten years. Soon after moving to LA, I did a show with Deaf West Theatre. It was so much fun bridging the Deaf and hearing worlds together through a performance which incorporated both ASL and spoken English. It was a show geared for children, so what was especially meaningful to me was seeing the young people’s excitement and providing accessibility for all audiences to enjoy the show.

We love that you volunteer with Senior Smiles too. What would you tell readers and fans about the importance of giving back and making time to volunteer and bring a smile to others?

Springer: I think giving back to your community is so important. It can be through activism, advocacy work, or volunteering. Volunteering can look like a lot of things, and it doesn’t need to feel overwhelming. Honestly, any little thing you can do to help serve others can make an impact. Yes, we need people to advocate for those who are voiceless, and we as a society need to provide those in need with services and resources. Sometimes just sparking up a conversation with a stranger and gifting them with a smile can do wonders for someone in need of kindness.

If you could describe Ms. Marvel in three words, what would they be?

What character in any realm of the MCU you’d love to see Tyesha have a scene with?

Springer: I’d love Tyesha to have a reason to visit Wakanda! It looks like such a cool place to visit. If she could interact with Shuri and get a chance to nerd out over all the tech stuff with her, Tyesha could then use her newfound Wakandan knowledge to help serve her community.

Is there a genre of acting you’d love to try next?

Springer: Honestly, I love doing it all. I have a background in comedy as well, so any opportunity to continue to flex my comedy muscle I’m down for! But I also adore period pieces! I’ve worked on one before (Strange Angel), and it was so much fun going back in time, experiencing the world, and dressing up as someone from the 40s. Recreating a world from the past where characters who look like me exist (because they always have) and creating storylines with diverse and complex characters excites me. I’d love to do something like Bridgerton, The Great, or Sylvie’s Love.

For now, you can see Springer as Hillman in Ms. Marvel, with new episodes premiering on Disney Plus every Wednesday.