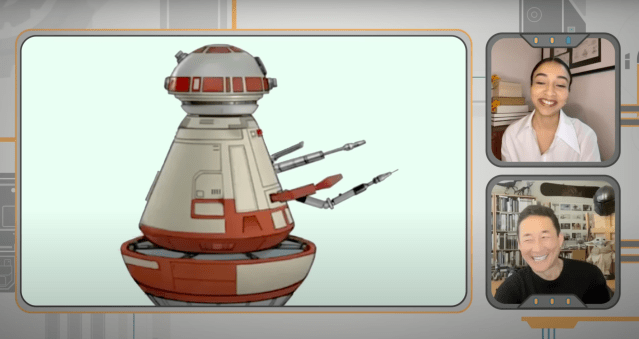 It’s been a long time coming, over three years in fact, but Lucasfilm Build my Droid winner Camille Manet has finally seen her award-winning droid come to life onscreen in an actual episode of Disney’s Obi-Wan Kenobi

imited series. Manet entered the contest back in 2019 when it was announced as a promotion for Star Wars: The Rise of Skywalker.

The 25-year-old Paris native is a lifelong Star Wars fan and was thrilled to receive the news that her design would be featured onscreen in the penultimate episode of the latest Star Wars streaming series. In a behind-the-scenes special posted to the official Obi-Wan Kenobi Twitter account, Manet responded emotionally to being told her droid, KP-1, would be making an actual canon appearance in the show by Lucasfilm vice president and executive creative director Doug Chiang.

“That actually means a lot to me because I grew up watching the OGs and watching prequels coming out in the theater,” Manet said. “Obi-Wan was my favorite character as a kid and still is,” she told StarWars.com. “I was actually really moved to learn that it would be in Obi-Wan Kenobi precisely because of that.”

Though the droid appearing onscreen bears the unmistakable LucasFilm touch — such as the droid’s standard astromech head utilized by R2-D2 and BB-8 — the design that ends up onscreen is unmistakably Manet’s, a cone with a semi-circular base, topped with a projector head featuring a multitude of gadgets and attachments.

Manet told StarWars.com: “I had the wheel as a starting point of the design. I really wanted the wheel, but then I thought about putting it horizontally, and the idea was the arms could be on it and be retractable. I was hoping, at least, that it was a new design when it came to the tools.”

The Build Your Droid contest was part of a partnership between Lucasfilm’s Star Wars: Force For Change initiative and FIRST, a robotics community seeking to inspire the future generations in science, technology, engineering, math (STEM), and creative arts. Ironically though, Manet doesn’t hail from creative art or STEM background. She’s just a fan. “I love cinema, I love movies, and I love Star Wars,” she told StarWars.com.