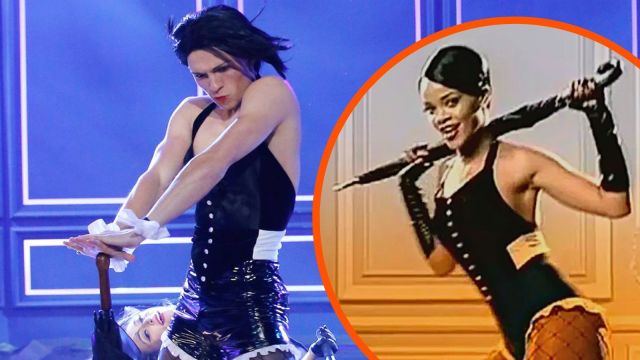 There is barely no worthy competition on Earth for Rihanna, but an exception might have to be made when it comes to one of her songs, because ever since Tom Holland performed “Umbrella” on Lip Sync Battle – the world has never been the same. So, it’s only right everyone is demanding he gets a special appearance at the singer’s Super Bowl halftime show.

Expectations have been through the roof since it was announced Rihanna would be 2023’s Super Bowl headliner. Famous for providing one of the most limitless stages in the world, the big game has always been synonymous with memorable performances, from Katy Perry dancing with sharks, to a Destiny’s Child reunion, and that iconic Prince guitar solo.

As one of the most successful performing artists of this generation, will the “Rude Boy” singer put her own dent on this list? People online have one little suggestion for how her stage could go down in history, and it involves Spider-Man himself, Tom Holland.

The world was just starting to know Tom Holland when he and Spider-Man co-star Zendaya participated in Paramount Network’s Lip Sync Battle to promote his big debut as the teen superhero in Marvel Studios’ Spider-Man: Homecoming.

The actor started by putting on a classic “Singin’ in the Rain” rendition, but stunned audiences when he changed into some mini shorts, transparent fishnet stockings and a corset to absolutely destroy Rihanna’s “Umbrella.” The moment became pop culture legend, and now people want a reprisal.

It’s time to give the people what they want, Ri-Ri!

The 2023 Super Bowl will take place at State Farm Stadium in Glendale, Arizona on Feb. 12.