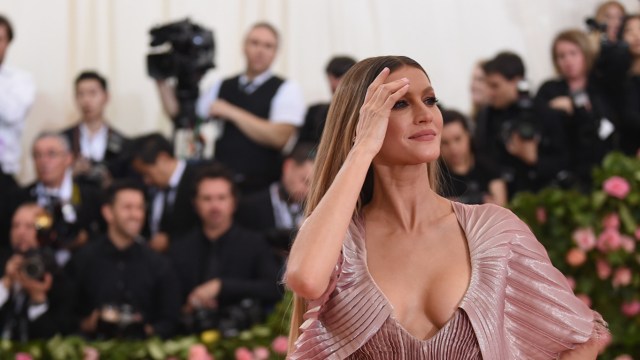 Page Six reports that Bünchden was spotted becoming very emotional and ultimately crying on the phone while in Hudson River Park, which is actually fairly close to her apartment in Tribeca.

The next night, Gisele was a no-show at a charity event, as also initially reported by Page Six, despite being named on the invitation card along with Emma Watson, Andra Day, and Gloria Steinem, amongst others. The event was the Kering Foundation’s Caring for Women dinner which was their first such event, designed to raise money for multiple different organization’s that are committed to ending domestic violence against women.

Also at the dinner was Gisele’s ex-boyfriend, Leonardo DiCaprio, who sat at the kid’s table (joking!). He actually sat at the main table with Kering CEO and founder François Henri Pinault, and his wife star actress Salma Hayek Pinault, who is also on the foundation’s Board of Directors.

People at the event understandably expressed surprise and disappointment that Gisele was not there. Apparently, she had canceled with organizers at the very last minute.

All of this comes on the heels of recent reports about her and hubby Tom Brady living separately as marital issues mount due to Brady un-retiring from the NFL and going back to play another full season with the Tampa Bay Buccaneers. Bündchen had publicly expressed concern over her husband’s return to the NFL in an a recent interview with Elle magazine.

The charity event, which raised money via auctions, raised over a million dollars in just under an hour. The item that contributed the most money was a reproduced pair of McQueen armadillo boots which were snatched up for $70,000.