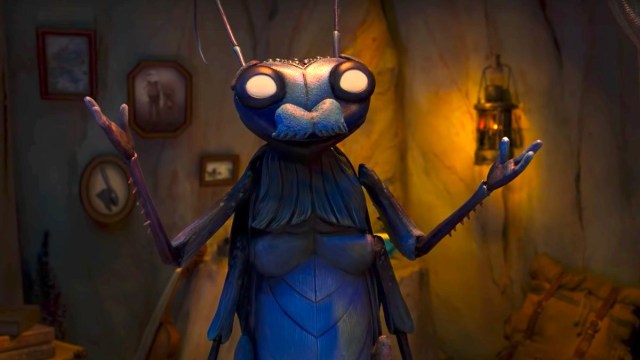 It’s been (Jiminy) crickets on the Netflix’s Pinocchio front for a while, but now director Guillermo del Toro has promised that a new look at his dark reimagining of the classic tale is on its way. 2022 is unexpectedly home to the Battles of the Pinocchios as Disney is unveiling a live-action remake of their iconic take on the story of the wooden boy brought to life, while Netflix is offering up a stop-motion animated film from Oscar-winner del Toro.

We got a brief taste of what the Shape of Water filmmaker has in store way back in January, which unveiled Ewan McGregor’s (pretty creepy-looking) Sebastian J. Cricket, the movie’s narrator and the titular puppet person’s conscience. Six months later, with half a year still to go before the film releases this holiday season, del Toro is now promising that a fuller teaser trailer is “imminent.” Whatever that means.

Del Toro is famous for the many projects of his that have failed to materialize over the years, but Pinocchio is one that’s finally seeing the light of day. The Hellboy helmer has been teasing this one since the late 2000s, but it languished in development hell until Netflix stepped in to become del Toro’s own blue fairy and made his wish come true by giving him the money he needed to make it.

With any luck, this Pinocchio teaser trailer will reveal exactly when we can expect to see it on Netflix. Right now, we know it’s coming in December, behind Disney’s Pinocchio hitting streaming on Sep. 8.